And another one: City of Spokane public safety spokeswoman Michele Anderson leaves the city 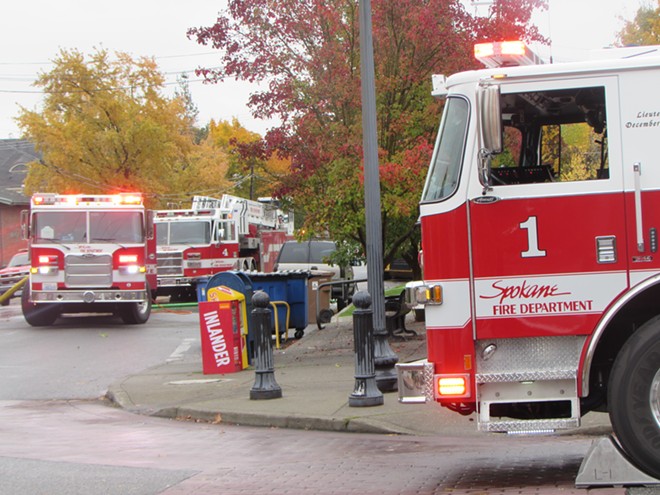 Daniel Walters photo
A trio of fire trucks responds to an emergency in Browne's Addition.

This week, you can add another name to the list: public safety spokeswoman Michele Anderson. In a phone call, Fire Chief Brian Schaeffer confirmed that Anderson had left the city. He says she's taking a job with a school district in Arizona. Before joining the city of Spokane, Anderson was a communications manager for a school district in Reno. She was not immediately available for comment this afternoon.

Schaeffer says that, after Coddington left the city a year ago, the workload was spread to the city's remaining communications staff.

"When Brian left, she really got dumped on," Schaeffer says. "Her and [city spokeswoman Marlene Feist] both."

Anderson has faced down that sort of challenge before. She was a public information officer position with the city of Reno, when a round of layoffs  effectively left her as the only spokesperson for a city larger than Spokane.

The staff shortage in the city of Spokane department got even worse about a month ago, when Julie Happy, communications manager for neighborhood & business services, left the city to become the spokeswoman for the Spokane Valley Fire Department.

"Michele actually recommended the job to me," Happy says. "So I applied and it was a good move."

Happy says she's enjoyed the more focused role of being the spokeswoman for a single department, instead of needing to handle communication for multiple sectors of the city, including the department that handles the "challenging area" of homelessness. And at the Valley fire department, she says, her bosses and co-workers are unified.

"I feel like here at the fire department, they all align," Happy says. "They’re all moving in the same direction. I enjoy that collaboration."

Ask if she intended that comment to be a contrast to the city of Spokane, Happy politely declined to answer.

But Schaeffer is blunt about how tough being a city spokesman can be.

"If the focus would be transparency and open government, it would simple," Schaeffer says. "It would be an easy job."

On top of that add the convoluted back-and-forth and confusion over the region's transition to an integrated fire-dispatch system. Even being in the middle of it, Schaeffer suggests, it can be hard to untangle everything that's going on.

(In a followup call, Schaeffer elaborated on the challenging environment:

In some cases, the city has opted to leave positions vacant until after the new mayor takes office in January. In the case of Happy and Anderson, however, the city is in the process of hiring replacements.

"The ideal candidate will have a strong background in media and public relations with an emphasis in the public safety field," the job description says. "The ability to handle multiple projects in a fast-paced environment and rely upon critical thinking and problem-solving expertise is essential to success in this role."

The city will start reviewing applications on July 22. For now, Schaeffer says, he'll be handling inquiries about the fire department himself.