And the Kitchen Sink 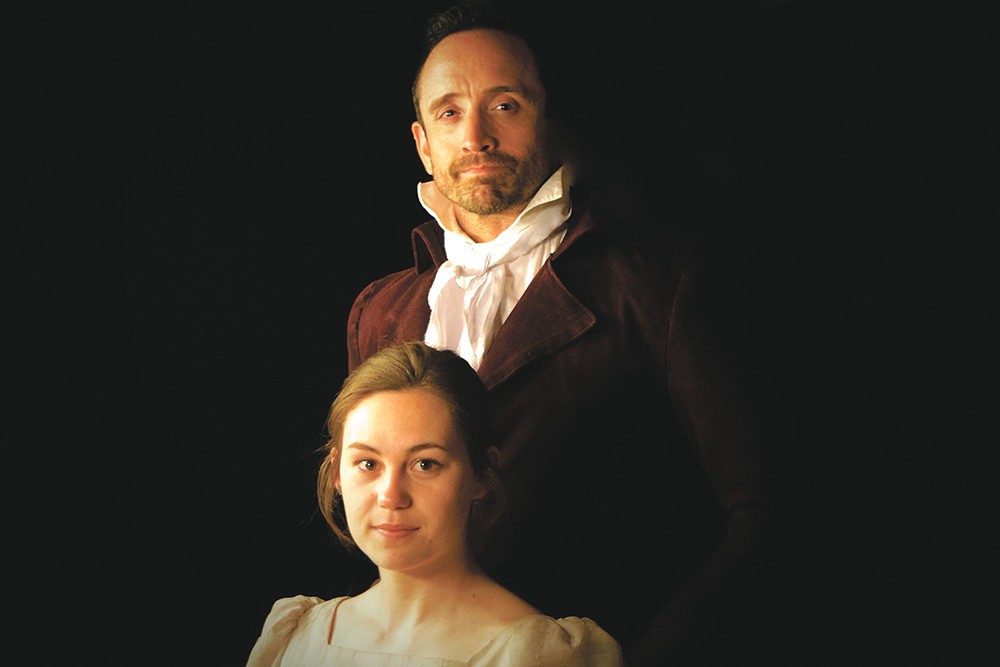 Chris Jensen
Brooklyn Robinson as Thomasina and Chris Jensen as the tutor Septimus.

Tom Stoppard's Arcadia has a little bit of everything:

"Sex, death, literature and science," says Kathleen Jeffs. "It has a lot for different kinds of people to grapple with and enjoy. It covers the gamut of human experience, from the emotional to the intellectual."

Along with Jamie Flanery, a stalwart of local theater and now an artistic partner at 1889 Salvage Co. on North Monroe, Jeffs is directing a new Stage Left production of the 1993 play, which, in typical Stoppardian fashion, examines weighty scientific and philosophical ideas from an unconventional and often playful perspective. Jeffs is chair of the Theatre & Dance Department at Gonzaga and worked alongside Flanery when he directed Stoppard's Hapgood at Spokane Civic Theatre this time last year.

Both Hapgood and Arcadia deal in dichotomies. Light and shadow, loyalty and duplicity in the former; order and chaos, reason and emotion in the latter. But whereas Hapgood examined quantum mechanics and motherhood through the lens of a spy thriller, Arcadia flips between past and present as a way of approaching social and mathematical constants — like, say, sex and the second law of thermodynamics — from two different starting points.

"Arcadia is absolutely my favorite play of all time," Jeffs says. "It's set in two different time periods. One is 1809, and the other is a modern, contemporary moment. You get that feel of a classic play, a period piece for half of the show, and then the other half — every other scene, basically — is the modern day. Because it's set in the same room, you also get the sense of that place. It's inhabited by both the past and the present at the same time."

Instead of dividing the play act by act, with each director assuming responsibility for a different time period, Jeffs and Flanery approached the entire play jointly.

"People always ask, 'How does co-directing work? The buck usually has to stop with one person or the other. What's been neat about this is that it helps to have two brains. You can have one person looking at the stage picture and being mechanical about the composition and how everything looks, and you can have another person living it and breathing it and watching for whether it's real, and doesn't just look like a composed, pretty picture."

It was also important to them that the the actors didn't "feel like they were being split up into two ensembles," which is a tempting way of dealing not only with the complexity of Arcadia but the smaller size of Stage Left. The cast of 12 is one of the largest the venue has ever had to accommodate. As a result, Jeffs says that she and Flanery have had to handle stage direction "very elaborately" to avoid crowding on- and offstage and to maintain the play's fluidity.

"That's Jamie's great gift. He's a master of [blocking]. It's like a football game where you've got the X's and O's, and people coming in from one spot and looping around to the other spot. I would say it's like a dance. Jamie's choreographed these 12 people to effectively dance around this table in the middle of the room. And it works really well," she says.

"The other piece of the success of that is Bryan Durbin's set. Bryan has put the set together in such a way that you can have these multiple exits and a big, beautiful window at the back. His talent is making that possible."

Getting a handle on the complex material and blocking is helped by a little familiarity. Flanery and Jeffs recently worked with actors Timothy Linton and Dave Rideout in Hapgood. In Arcadia they play gardener Richard Noakes and university don Bernard Nightingale, respectively. As for the rest of the cast, Chris Jensen, who plays the tutor Septimus in the "1809" portion, Tami Rotchford (as author Hannah Jarvis), Ron Ford (poet Ezra Chater) and Marek Nelson (Jellaby the butler) are among those who've previously performed at Stage Left and are well acquainted with the space. Brooklyn Robinson and Jordan Guinn Schneider, respectively, are playing Thomasina and Chloe Coverly, the two young women who are pivotal to Arcadia's plot and concepts.

"It's what they say about good management or good directing, which is to hire the best people and let them do their work," says Jeffs. "When you get actors who can really live and breathe the characters, then the intellectual stuff and the mathematical stuff, so long as they really understand what they're saying, comes really naturally. One of the most important things of making this particular play succeed is to do both of those things really well." ♦