Another Brick in the Wall

The LEGO Ninjago Movie delivers fun family action, but can't quite rise to the level of its predecessors 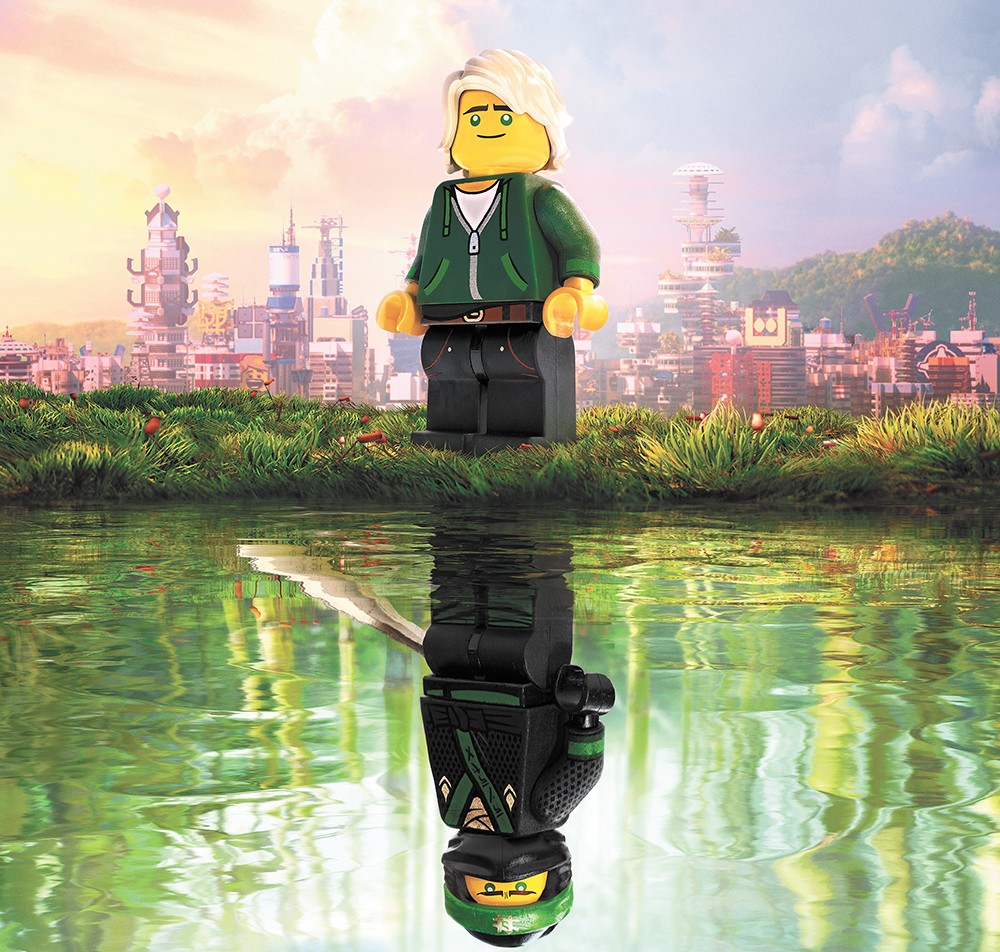 Round 3 in the LEGO movies can't reach the heights of the first two.

It's easy to feel like everyone hates you in high school;

teenage hormones and angst always get the better of you. But in the case of Lloyd, The LEGO Ninjago Movie's protagonist, those feelings are totally justified. Not only do his classmates hate him, everyone in the city of Ninjago (other than his mom) loathes him to the point where the No. 1 song on the charts is a playful pop ditty about how nobody likes him.

That's what happens when you're the son of the evil Lord Garmadon, who attempts to conquer the city on a daily basis (even if said deadbeat dad was never around to raise you). Thankfully, Lloyd has an outlet for his pent-up frustrations: Heading into battle as the Green Ninja, the city's masked hero and leader of the six-member Secret Ninja Force, who also happen to be his only high school pals. Dealing with your daddy issues by thwarting his evil plans on the regular turns out to be decent, if unconventional, therapy.

Based on the LEGO Ninjago toy line and subsequent TV series, the movie frames its animated tale as a story told in the real, human world by a mysterious antique shopkeeper (Jackie Chan) to a young boy who wanders in while playing with a Ninjago figurine. Under the sage guidance of Master Wu (voiced by Chan), Green Ninja (Dave Franco) and his team of Fire (Michael Peña), Ice (Zach Woods), Water (Abbi Jacobson), Earth (Fred Armisen) and Lightning (Kumail Nanjiani) ninjas wage epic battles with their mech vehicles across the toy brick city in tight action reminiscent of a Transformers movie (but a million times easier to follow than a Michael Bay explosion-fest).

In a reverse Skywalker situation, Garmadon is oblivious to the fact that his greatest foe is actually his son. In fact, obliviousness is Garmadon's defining characteristic and the source of most of the film's best humor. Justin Theroux hits it out of the proverbial park with his vocal performance as the evil warlord: The insults directed at his ever-changing stable of right-hand men and women, as well as lines about not understanding how the Green Ninja never learned to catch, land with a stupid, charming punch.

Unfortunately, all the hostility Lloyd feels toward his unwitting father finally bubbles over, leading him to take a drastic shortcut that puts the entire city in peril far greater than the prospect of Garmadon's rule. The Secret Ninja Force journeys into the jungle in search of an "ultimate ultimate weapon" to undo what Lloyd has done, and Garmadon soon catches wind of the plan and tries to find it himself, leading to more delightfully awkward father-son encounters.

While The LEGO Ninjago Movie still feels like it's set in the same sort of fanciful, imaginative realm as previous LEGO feature films, it can't live up to The LEGO Movie or The LEGO Batman Movie's comedic chops. While both those films were littered with nonstop pop culture jokes (many of which weren't targeted at children), Ninjago feels more like a traditional kids' movie. There's still plenty of humor that everyone can enjoy, but it's more situational (as when Master Wu tells the Secret Ninja Force, post-attack, "If I was going to die, it'd be to teach you a lesson") and a far cry from the onslaught of zingers that made those other entries great.

This shift can be attributed to Ninjago's separation from established pop culture realms and the creative team helming the film. While the dynamic comedy writing/directing team of Chris Miller and Phil Lord oversaw The LEGO Movie, and Robot Chicken veteran Chris McKay directed and co-wrote LEGO Batman, former art and animation department workers for projects like the films Madagascar and the How to Train Your Dragon — Charlie Bean, Paul Fisher and Bob Logan — co-directed and assisted writing Ninjago. The result is something that feels more like those aforementioned children's movies, which isn't necessarily a knock, but it certainly moves at a different speed than the rest of the LEGO cinematic universe.

It's a bit of a bummer that the script doesn't offer more for a voice cast loaded with comedy veterans. Nanjiani and Woods draw laughs via their characters' cowardice, but there's basically nothing for Armisen, Jacobson or Peña to do with their generic roles.

The LEGO Ninjago Movie is a family film through and through, ultimately offering a light, all-ages story about the importance of a parent-child bond, listening, self-awareness and self-worth. We might not all fight our familial battles with high-tech weaponry or have to deal with dads who live in volcanic lairs, but family dysfunction is universal. The LEGO Ninjago Movie may not be peak LEGO cinema, but the second-tier offerings are still something entertaining to build on. ♦

The LEGO NINJAGO Movie is not showing in any theaters in the area.