Mitch Ryals
Vy Thang shows a picture his niece drew for him. He talks to his family almost every day, but hasn't seen them in 11 years.

At just 35, Vy Thang has spent more time in prison

than he has out of it. In 1999, he was convicted of aggravated murder in the first degree — the state's most serious murder charge — for kicking an elderly woman to death in her home two years earlier. The then-17-year-old broke into the house looking to steal money to pay a friend back for rent. At that time, an aggravated murder conviction required a life sentence without the possibility of parole. Spokane Superior Court Judge Gregory Sypolt had no choice but to hand down that sentence.

Thang appealed his case twice, and on the second try, got a new trial but it ended with the same result. He resigned himself to dying in prison.

Then in 2012, the United States Supreme Court ruled that mandatory life sentences without parole for juveniles amount to cruel and unusual punishment, a violation of the Eighth Amendment. Washington state responded in 2014 by changing its law to reflect the Supreme Court's ruling.

Now Thang will get a new sentencing hearing and a chance at release.

"These rulings are an acknowledgement that teens' brains are different from adults, and the court needs to consider that prior to sentencing," says Tom Krzyminski, Thang's public defender. "In the past, age wasn't looked at. Our hands were tied at sentencing."

Thang was born in Cambodia

during the Khmer Rouge regime and genocide. His family escaped to the U.S., and his parents found jobs picking bear grass in Aberdeen, Washington, for a floral shop. They worked every day, including weekends, and expected the same of their children. Thang resented them for it.

"When we first came to the United States, it was new for my parents, and they didn't know anything about American culture," Thang says from the Spokane County Jail, where he was held briefly before a recent hearing. "They didn't really know how to raise me. I was left to learn on my own."

At 14, he started skipping school and breaking into houses, he tells the Inlander from jail. By 17, he'd been caught twice and was serving time at a juvenile detention facility near Centralia when he and his cellmate escaped. Thang and Simeon Terry walked away from an outing to a Seattle Seahawks exhibition game. The boys made it to a friend's apartment in Spokane. Within a month, Thang was boosting himself through Mildred Klaus' window, intending to steal money to pay for his friend's hospitality and food.

It was dark in the kitchen, so he opened the refrigerator to illuminate the room just enough. He rummaged through cabinets, looking for money and valuables, when he was startled by the 85-year-old Klaus, who had been sleeping in the living room.

"What are you doing?" Thang remembers the woman shouting.

"I went into panic mode," he says now. "Instead of just running away when she came towards me, I didn't know what to do, so I grabbed her."

Thang pushed Klaus down and kicked her repeatedly. He left with less than $100, having taken her life.

14-year-old Evan Miller and his friend, Colby Smith, beat Cole Cannon with a baseball bat, covered him with a sheet and left him to die. They returned later and set fire to Cannon's trailer. Authorities say he died from blunt force trauma and smoke inhalation.

Miller was convicted of murder in the course of arson, which carried a mandatory life sentence without parole. Smith pleaded to a lesser charge and testified against Miller. In 2012, the U.S. Supreme Court considered Miller's case, and another from Arkansas involving a 14-year-old, as the basis for its decision that mandatory life sentences for juveniles are unconstitutional. 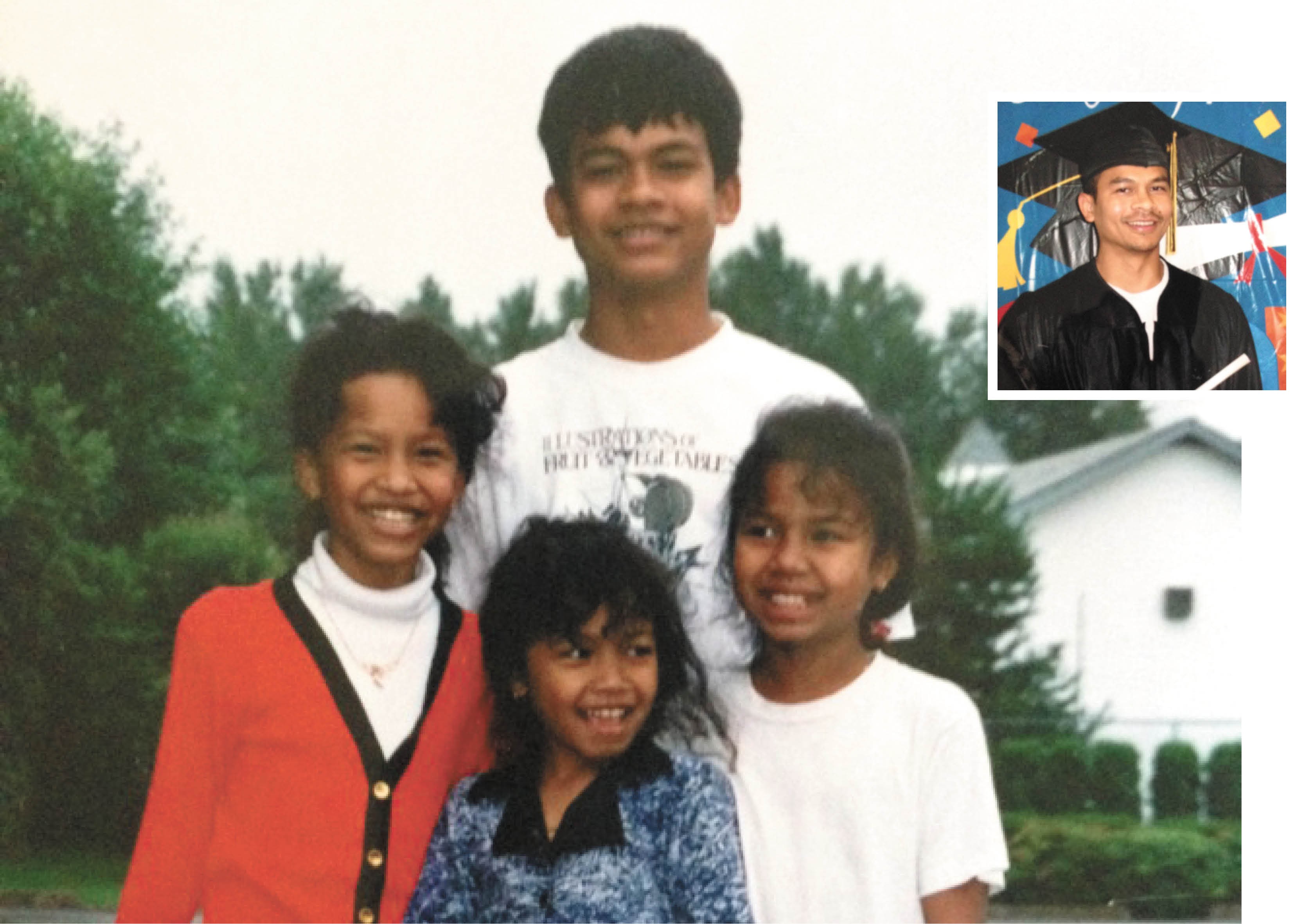 Vy Thang with his sisters. INSET: Thang at a graduation inside prison.

The ruling expands on two previous Supreme Court cases: In 2005, Roper v. Simmons established that juveniles cannot be sentenced to death; in 2010, Graham v. Florida banned juveniles from being sentenced to life without parole for non-homicidal cases.

These three cases represent the court's recognition of recent scientific research that juveniles are different from adults, says Nick Straley, a staff attorney with Columbia Legal Services, an organization that represents low-income clients in Washington.

"It's important that the court take a second look after a child has developed into an adult to consider if parole should be provided," he says. "We don't believe it's ever appropriate to sentence a child to life without parole."

Washington is one of at least 21 states

that has responded to the Supreme Court's ruling with legislation. In 2014, Gov. Jay Inslee signed a bill that gives juvenile killers serving a life sentence without parole another sentencing hearing. Judges can then determine if they deserve a chance at release.

Under the law, juvenile killers who are 16 or 17 years old can still be sentenced to life without parole. Kids under 16 will receive at least 25 years, after which they'll be eligible for a parole hearing. The difference now is that judges have discretion.

In Washington state, the new law could impact as many as 29 people; four of those cases happened in Spokane County.

One man already has been scheduled for release in February 2016. Barry Massey was 13 when he shot and stabbed Steilacoom marina owner Paul Wang in 1987. Massey was the youngest person in the U.S. to receive a life sentence without parole.

The Washington State Supreme Court took the issue a bit further in an August 2015 decision that says judges should consider age, even if the convicted individual is older than 18. A 5-4 ruling in State v. O'Dell said a man who was 10 days past his 18th birthday when he had sex with a 12-year-old will get a new sentence "at which the trial court can consider whether youth diminished O'Dell's culpability for his offense," according to the decision.

"When people are sentenced, it's important to consider them as an individual," says Nancy Talner, a staff attorney with the ACLU of Washington who frequently works on juvenile justice cases. "Some people can be mature and sophisticated when they're 15, and others can't in their mid-20s. The court should be open to considering those things, and look more at the individual in front of them."

Thang has settled into a steady routine

at the Washington State Penitentiary in Walla Walla. He rises every day by 6 am and makes his bed, careful not to wake his cellmate. He meditates for 20 minutes before tending to his garden out back. He's growing cucumbers and tomatoes. He has tea with breakfast, and then it's time for work. He's a self-taught electrician and can fix just about anything, according to corrections officer Robert Branscum.

The structure to his day is a far cry from his childhood in Aberdeen. As a kid, his parents would have already left for work by the time he got up for school. They never took a day off, and expected the same of their children. That meant little time for friends or afterschool activities.

"During that time I felt kind of lost. I just didn't feel like my life wasn't going nowhere," he says now. "I just felt like I had no direction. Like I'm just going through the motions."

He often thinks about the night that changed his life and the lives of his victim's family. He's frustrated with the person he was then.

"Saying I'm sorry is not enough for the pain I've caused. I know this is the third time they've had to relive this thing all over again, and I'm sorry for that," he says. "I'm trying to be a better human being. I don't want to be remembered as someone who took somebody's else's life. I want to be remembered as someone who tried to make himself better."

Without a release date, Thang is at the bottom of the list for programs and classes in prison. Still, he's managed to notch several accomplishments, including certificates in graphic design, public speaking and keyboarding, and for taking a self-awareness class.

He's currently on the waitlist for an Associate of Arts program at the prison, and collaborated with several other inmates on a proposal sent to Rep. Larry Springer (D-Kirkland) for higher education in prisons.

"I'm impressed that he has done these things with the understanding that he has a life sentence," says Lisa Ashley, a prison chaplain who's been writing to Thang since 2014. "I haven't seen other inmates do that."

In June, a state Department of Corrections officer interviewed Thang in preparation for his new sentencing hearing. In the report, Community Corrections Officer Jeremy Wilson recommended that his sentence be reduced to the minimum 25 years. He's already served 16.

"I have some high hopes for the sentencing," says Krzyminski, Thang's public defender. "My client has done some real positive things, even though he's sentenced to life."

On Sept. 23, Judge Sypolt has the authority to maintain Thang's life sentence, or give him the opportunity to appear before the Indeterminate Sentence Review Board for a parole hearing. The board has been told to release juvenile killers unless it finds the person is more likely than not to break the law again.

Thang's sister Lisa plans to attend the hearing. So will Klaus' son and grandson. Both men declined to comment for this article.

In the meantime, Thang continues to educate himself. He goes to the library once a week to keep up on recent court cases and check out a new book.

"I'm not putting too much hope into it," Thang says of his new hearing. "I try not to think about it too much, but how can you not?" ♦