Architecture For Your Head

Olive + Boone shakes up conventional ideas in fashion and art with its edgy, modern headwear 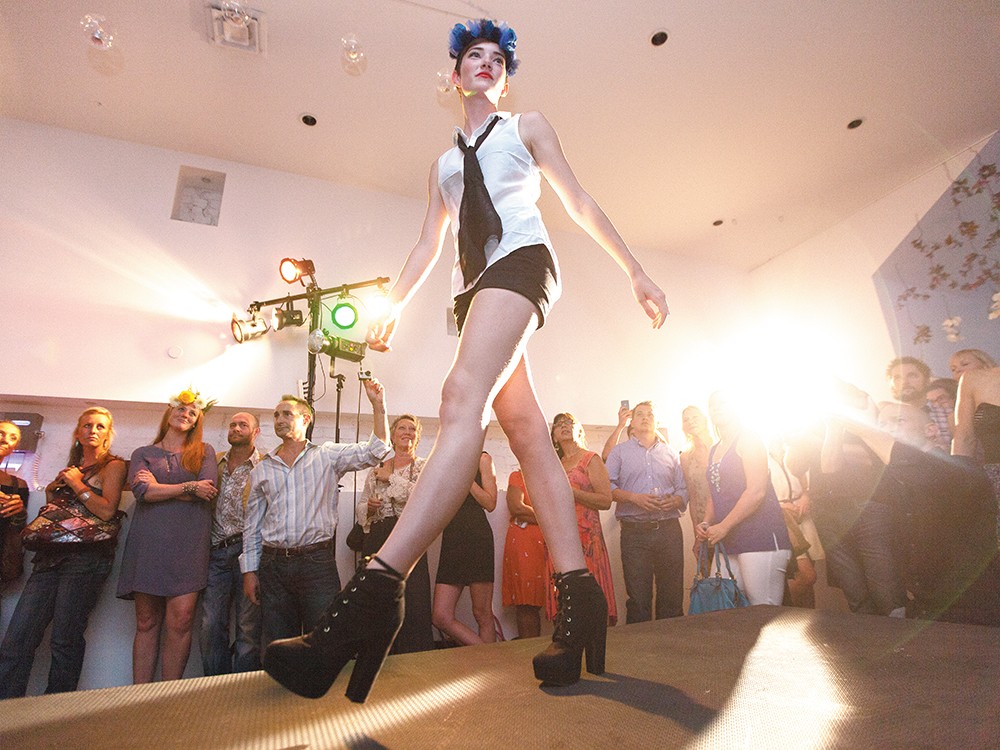 Erin Haskell’s hats aren’t for wallflowers. Women who wear her creations, adorned with sweeping feathers, light-reflecting crystals and delicate lace, will stand out in a crowd and should be prepared to be approached with compliments and curious inquiries of “where did you get that?”

Since the 29-year-old Spokane marketing specialist-turned-interior designer launched her boutique, Olive + Boone Custom Millinery, about a year ago, her retro-inspired yet modern and thoughtfully designed headwear has been — quite literally — turning heads across the Inland Northwest and beyond.

On a muggy late summer evening, a contemporary, stark white room on the first floor of a brick building tucked off Browne Street in downtown Spokane is packed with high-heeled women and dress-shirted men, all crowding around a long black stage running through the room.

As heavy bass beats start thumping out of speakers on either side of the stage, a lanky model wearing a beige trench coat steps out from behind a wall and saunters down the runway with purpose. All eyes are on the small, structured oval-shaped pillbox hat perched on her pixie-styled brunette hair that doesn’t move an inch as she marches in towering platform heels.

More trench-coated models emerge, each wearing similarly shaped yet entirely unique headpieces. Some are bright and bold while others are neutral beiges and grays; a few feature large, stiff bows while others are unadorned.

Just when the audience thinks the fashion show unveiling Olive + Boone’s fall collection is almost over, another themed group of hats emerges, bobbing on the models’ heads as they march down the stage: fascinators, wedding veils, poufy lace crowns, English-inspired hats, and finally, heavily adorned headbands of fresh roses and greenery. At the end, a parade of models in short white dresses lines either side of the runway as milliner and designer Haskell emerges, a wide smile stretched across her face, a black lace crown over her forehead and long, wavy auburn hair.

The free-spirited designer has only been making and selling her handmade headwear since last summer, but she’s already been discovered by clients as far away as Paris, New York and Los Angeles. In the beginning, Haskell says she struggled with the decision to keep the business in Spokane because of her products’ appeal to a higher-end, edgier fashion demographic. That all changed when she realized how supportive her friends and even complete strangers were of her vision to create and sell custom, handmade hats out of Spokane.

“I feel like Spokane has your back in that sort of sense — people appreciate others taking a chance,” Haskell says. “If you believe in [Spokane], it will believe in you.”

Haskell’s designs are partly inspired by a bygone era during the first half of the 20th century when hats were more of a wardrobe staple, combined with the recent revival of high fashion headpieces sparked by the royal wedding of Kate Middleton and Prince William in 2011. Haskell’s formal education in architecture and an admiration of mid-century modern design elements also influence her designs.

Haskell strives to always use high-quality materials to convey her creative philosophy that each piece is intentionally created and meant to last far beyond the special occasion it was first worn to. Olive + Boone (named after her two dogs) hats are constructed from material like Spanish and Chantilly lace, organza and merino wool, and embellished with bird feathers from a local taxidermist, spun horsehair netting and European crystal beads. Each piece is handmade by Haskell or one of three local seamstresses she’s hired to produce hats for the millinery. Because Olive + Boone’s pieces are handmade from high-end materials, each ranges, on average, between $150 and $300. As much as they’re a fashion accessory, Haskell’s creations are also works of art.

A permanent downtown showroom for the millinery is currently in the works, in a space on West Sprague Avenue that Haskell hopes to have open by October.

Although she creates pieces to be worn, Haskell doesn’t consider herself a fashion designer, but a product designer.

“This is architecture for your head. I strive to take into consideration the geometry of someone’s face and the angles of their face. It’s more about thoughtful design, and that less is more,” she says.

Even though she continuously hears doubtful comments from local residents who say they’d never have an occasion fancy or special enough to wear an Olive + Boone hat, it doesn’t hamper her goal to shake up people’s perceptions of when and where hats can be an appropriate or even unexpected accessory.

“You don’t have to live in fabulous New York City to wear something fabulous,” she says. “It’s about taking risks and believing in yourself, and that you are confident in that risk.”