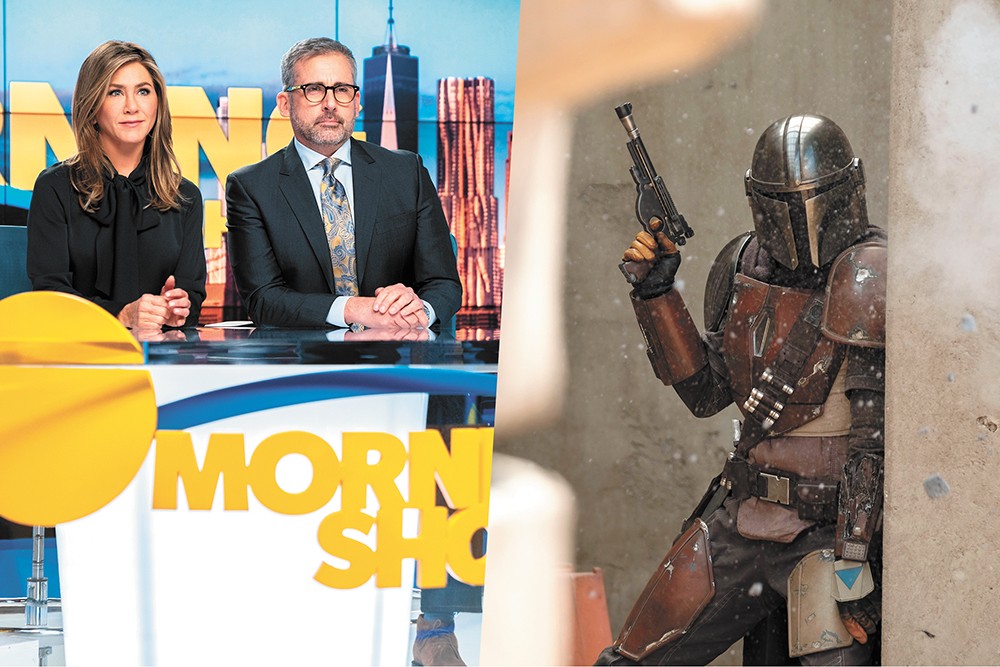 The Morning Show (left) falls flat, while The Mandalorian explores the seedier side of the Star Wars universe.

The streaming wars are just getting started, and the recent launches of Apple TV+ and Disney+ have added major players to the landscape, with big, splashy original content (alongside, in Disney's case, a vast library of vintage material). If you're having trouble deciding whether these services are worth the money ($5 a month for Apple, $7 a month for Disney), here's a rundown of the most notable original programming that's available now or soon (on both services, new episodes of series premiere on Fridays).

The Mandalorian (Disney+) Easily the most high-profile offering on either service, The Mandalorian is the first live-action Star Wars series, set between the events of Return of the Jedi and The Force Awakens. Pedro Pascal stars as the title character, a bounty hunter who's yet to remove his face-covering helmet in the first four episodes. That makes him tough to connect with, but the series looks gorgeous and has an epic sweep reminiscent of classic Westerns, and it offers a deep dive into the seedier side of the Star Wars universe. Plus, Baby Yoda!

The Morning Show (Apple TV+) With a star-studded cast including Jennifer Aniston, Reese Witherspoon and Steve Carell, and a timely hook about a Me Too-style scandal at a national morning news program, The Morning Show is Apple's biggest prestige-TV swing, but it comes off more like bargain-bin Aaron Sorkin, a glossier, soapier version of his HBO misfire The Newsroom. There are plenty of strident speeches about the future of journalism, along with some salacious liaisons, but none of it rings true, even as it shamelessly appropriates sensitive real-life scandals.

High School Musical: The Musical: The Series (Disney+) The convoluted premise of the mockumentary-style sitcom (students at the school where the original High School Musical was shot decide to mount their own stage production) is a bit of a stumbling block, but this wholesome, tween-friendly show is fresh and funny, right in that Disney sweet spot of family entertainment with broad appeal.

Dickinson (Apple TV+) The deliberate anachronisms (modern pop music and slang) in this period dramedy about young Emily Dickinson lose their comedic value quickly, but there's a lot to like in Hailee Steinfeld's performance as the moody poet, and the show effectively uses its hybrid style to connect to universal emotions about growing up.

Pixar's SparkShorts and Forky Asks a Question (Disney+) If you've seen the short films that play in front of Pixar's animated features, you'll mostly know what to expect from the endearing SparkShorts series, although at least one short (Purl) is aimed at a more mature audience (including mild swearing!). Toy Story 4 breakout character Forky explores life's absurdities in the slight but amusing Forky Asks a Question shorts.

Lady and the Tramp (Disney+) Disney's remake mania continues with this live-action take on the 1955 animated film about a pampered suburban dog falling in love with a carefree stray. It's perfunctory and antiseptic, adding a half-hour to the story while losing most of the wonder and expressiveness that made the original great.

Noelle (Disney+) Anna Kendrick plays Santa Claus' overachieving daughter in this aggressively cute Christmas comedy, co-starring Bill Hader as the reluctant heir to the Santa gig. Kendrick is charming, but the story, with its fish-out-of-water jokes and wan empowerment message, is mostly a dud, and the special effects are barely TV-worthy.

Hala (Apple TV+, Dec. 6) This Sundance-premiered coming-of-age story follows some familiar beats, but it finds a new perspective in the character of the American-born daughter of Pakistani immigrants (played wonderfully by Geraldine Viswanathan), who has to navigate cultural and generational divides along with typical teenage angst.

Also on Apple TV+: Fantasy drama See, starring Jason Momoa, is a plodding, absurdly grim take on a post-apocalyptic future in which all humans are blind (except, of course, for the requisite Chosen One). Alternate history drama For All Mankind, from Battlestar Galactica and Outlander producer Ronald D. Moore, imagines a world where the Soviets got to the moon first, but it's more of a stodgy period piece than a bold reinvention of history. Psychological thriller Servant, produced by M. Night Shyamalan, has a creepy baby-swapping premise and some unsettling style and atmosphere, but is a little low on incident.

Also on Disney+: Feel-good reality show Encore! reunites the casts of high school stage productions to recreate their past performances, to no apparent purpose. Self-congratulatory documentary series The Imagineering Story traces the history of Disney's theme parks, and feels like the kind of thing that would be shown to people stuck in line at Disneyland. Edutainment series The World According to Jeff Goldblum features its namesake star at his most irritatingly quirky, playing up his oddball personality as he talks over the experts ostensibly helping him learn about everyday topics. ♦