Are The Parties Over?

Donald Trump and Bernie Sanders are rewriting the rules of politics

During their wall-to-wall coverage of the days leading up to the Iowa caucuses,

the media often came face to face with their own mistaken predictions and blanket generalizations. After all, only a few months earlier they had, as a class, nearly laughed themselves silly at the idea that Donald Trump might win the Republican nomination. And then there was MSNBC's Chuck Todd interviewing some "regular" Iowans; at the end of the segment, he asked one middle-aged white guy who he'd vote for if his favorite, Trump, didn't make the final cut.
click to enlarge 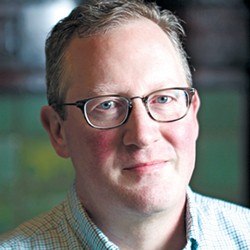 He'd probably have to go with Bernie Sanders, the Iowan said. They went to commercial just when it was getting really weird.

While Sanders and Trump each came in second in Iowa Monday night, they had solid showings. For not trying too hard in a state known to favor evangelical candidates, Trump did very well. And in facing a candidate who has been running for president for more than a decade, Sanders' "virtual tie" was a victory.

Sanders and Trump are about as far apart as two men can be; how could that Iowa voter have them as his top two? Odd, yes, but it makes sense. We've been conditioned to think about politics in terms of the split between political parties, the split between urban and rural America and the split between red and blue states. But is it really more of a class thing?

Trump and Sanders are appealing to the angry middle — the people who worry more about their stagnant wages than which party a candidate belongs to. Sanders and Trump are also, functionally, independents — Sanders literally so, as he only caucuses with Senate Democrats. While Trump may be able to pull out a Bible verse when the crowd demands it, let's be real — philosophically, he's an independent.

And that's a great place to be, as last year 43 percent of Americans claimed to belong to neither party, according to Gallup — the highest since they've been tracking it.

Whether a billionaire will turn out to be a traitor to his class like the Roosevelts, or if a self-described Democratic socialist can really move a capitalist nation, we don't know yet.

So America may nominate

a rude billionaire demagogue and a disheveled hippie idealist to duke it out. That would be the most remarkable match in our history — settling in the starkest terms the struggle between labor (Sanders) and capital (Trump; sorry, I don't buy his sticking-up-for-the-little-guy act). It's a battle that's been waged since America first rose from its rural roots.

The other remarkable thing is how little the political parties have been a part of getting to here. The Democrats are struggling under the hangover of eight years in the White House. Few are very excited about Hillary Clinton, which isn't really fair, as she might be the most experienced presidential candidate ever. Meanwhile, the two leading Republicans — Trump and Ted Cruz — are despised by party honchos.

A popular analysis is that Trump and Cruz would kill the Republican brand, but really, the GOP has been doing just fine by itself. Maybe it started when Speaker Newt Gingrich took power from members of Congress for himself. Later party leaders gleefully created super PACs, but are horrified now that they have run amok. They handed over the agenda-setting function to entertainers on FOX News. They've shut down the government out of spite, triggering a cut in the nation's credit rating, and nominated Sarah Palin to the second-highest office in the land. Today, the Tea Party-powered Freedom Caucus is calling the shots in Congress, deposing Speaker John Boehner and handpicking his successor. Meanwhile, the list of policy accomplishments is blank. You can see why Americans are turning away from political parties.

In E.J. Dionne's new book, Why the Right Went Wrong, he tracks the history of the Republican Party from the Goldwater campaign on. It's a trail that wanders further and further from moderation, where the majority of Americans live. Bill Clinton and Barack Obama pushed the trend by co-opting some the GOP's best reforms, from welfare to health care. Republicans haven't come close to winning a national election since George W. Bush rode off into the sunset.

Are we too fragmented a society

to live under any kind of big tent? Even in the Iowa results, you can see the parties' grip slipping. Still, they may yet prevail with a Hillary Clinton-Marco Rubio matchup. But if party crashers Trump, Cruz or Sanders are nominated, that could mark the end of political parties as we have known them. Maybe we should cheer Sanders and Trump for puncturing the balloon full of all that hot air, allowing the blossoming of a more representative political future.

But what would replace them? New microparties of all varieties, representing all of America's tribes? Ultra-rich independents like Trump and former New York mayor Michael Bloomberg calling the shots? The very notion of unity and progress is at stake, and while parties have their problems, we may rue the day that politics became a complete free-for-all.

In these coming months, we're settling on a future leader. But we're also holding a referendum on traditional American politics. ♦