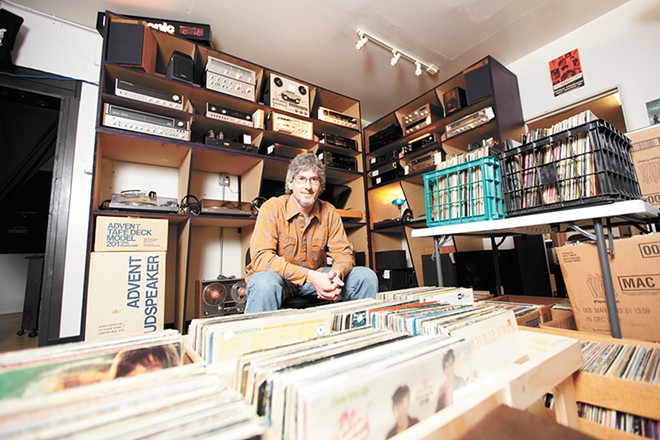 Young Kwak photo
Places like Groove Merchants (with owner David Thoren) will help you embrace the old and make it feel new.

If you have an attic, a garage or any other kind of storage space, no doubt it's filled with old electronics and pieces of technology that are merely collecting dust. They may be outdated, but they're also treasures, and charming but clunky media formats from the past would no doubt be fascinating to anyone under the age of 20. Look at vinyl records, which may have fallen out of fashion in the '90s. They're back in a big way, and if you haven't jumped aboard the vinyl train already, you should consider starting a collection. Groove Merchants in the Garland District is a go-to for vintage listening equipment, while indie shops like Resurrection Records, 4000 Holes and the Long Ear in Coeur d'Alene can help you add new titles to your unused record collection. VHS tapes and laserdiscs were all the rage in the days before BluRays and streaming, and most young people have probably never even seen one in the wild. Most thrift shops have VCRs or laserdisc players for a pittance, and you can check out the ol' reliable Ray's Video Station to peruse their collection of tapes and discs. Start writing your great American novel on that old Smith-Corona you've kept for sentimental reasons (you can usually find usable typewriter ribbons in vintage stores or, if all else fails, on eBay). And if you happen to have a bulky VHS camcorder or one of those handheld Super 8 cameras, film your own home movies and screen them for family and friends. There's something comforting about experiencing art through old methods, because it'll make you appreciate just how slick and convenient our everyday streaming and digital technologies really are.

Speaking of retro, the Jedi Alliance arcade in the Chief Garry Park neighborhood is a cool, slightly offbeat family hangout, a place that's reminiscent of a time not so long ago when seemingly every suburban storefront had at least one video game cabinet. Jedi Alliance houses dozens of classic arcade titles like Pac-Man, Galaga and Centipede, as well as a collection of movie and music memorabilia and more than 30 pinball machines from the '70s to now. If your kids haven't experienced these technological dinosaurs, getting behind the joysticks of a Burger Time or Galaga machine might foster an admiration for the design and aesthetics of these vintage machines, and an appreciation for just how much effort and strategy went into mastering the gameplay. The Jedi Alliance will be open Fridays, Saturdays and Sundays between 6 and 10 pm, and there's a $12 per person admission fee.

Young Kwak photo
OK, put Netflix down for a moment, and pick up a good book.

Remember in grade school when you and your classmates were challenged to read a certain number of books, and if you reached the goal you were rewarded with a pizza party or a class trip to Silverwood? Simpler times. But grown-ups could probably use the same kind of motivation: Instead of expanding our minds with a good book, we're vegging out in front of an episode of The Office we've already seen a dozen times before. And nothing motivates quite like a self-imposed objective. Challenge yourself to read a certain number of books in a week or a month, and then reward yourself when you meet it — celebrate with a marathon of The Office, maybe. While you're doing that, you can support local indie bookstores like Auntie's, Wishing Tree and the Well Read Moose in Coeur d'Alene, all of which could use a boost and are open for in-store purchases, curbside pickup and shipping orders. Amongst the buzzed-about books you can add to your to-read list: new novels from local authors, like S.M. Hulse's Eden Mine and Ian Pisarcik's Before Familiar Woods, as well as recent releases from prominent African-American authors like Brit Bennett (The Vanishing Half) and Abi Dare (The Girl with the Louding Voice).

Got bored teens? Send them to the library to play some video games.

THE LIBRARY IS OPEN

The Spokane Public Library is a reliable place for free, which makes any of its branches an ideal place to pass the time when the outdoors are off limits. You can take a virtual tour of the local big cat sanctuary Cat Tales on Aug. 10, when the library will send out a link to its live video on social media platforms. Teenagers who are obsessed with video games can all play together, a selection of co-op and competitive games, on Aug. 19 and 25. On the last Saturday of every month (that's July 25 and Aug. 29 during a potential smoke season), the Hillyard Library hosts a Joy of Crafting class that's strictly for adults, and it's a great way to keep your hands and your mind busy. Visit events.spokanelibrary.org.

Even when we aren't on lockdown, we spend so much of our days with eyes glued to various screens; the record-breaking sales of Nintendo Switches in the last few months is proof of that. In order to stay engaged and keep your brain sharp, consider swapping out a couple hours of screen time with time sitting around with a good board game. The downtown Spokane location of Uncle's Games has a wide selection of tabletop and card games, and they're able to order titles that aren't in their current inventory. Some favorites amongst Inlander staffers include Blokus, a color-based, Tetris-like strategy game; the fast-paced card game Sushi Go!; the tactical dungeon-crawl game Gloomhaven; and the role-playing adventure Pandemic Legacy, which is both hugely popular and obviously topical. And if you want to go with a throwback, learn a classic parlor game like Chinese checkers or cribbage, or finally teach yourself how to play chess after years of promising to do so.

The Spokane Print & Publishing Center is a local nonprofit that helps local artists produce and distribute their work and provides binding and printing services for authors. But it also teaches important artists' and graphic designers' techniques — drawing, screen printing, letter pressing and more — through classes that are open for varying degrees of expertise. The center put a hold on its in-person classes during the height of the pandemic, but it's back in business again, albeit with limited class capacities. Visit spokaneprint.org.

Make your own film festival.

A FESTIVAL IN YOUR LIVING ROOM

Summer is, traditionally, film festival season, but all of the major festivals around the world were put on hold this year. In lieu of spending hours in a darkened theater, consider programming your own household film festival and expand your cinematic horizons. Make a day of it. Make some popcorn. Pick a theme — a specific actor or director, or a genre that you've always meant to explore — and find four or five streaming titles that meet your criteria. Or maybe dig up the titles that have been sitting at the bottom of your Netflix queue for years. There's nothing quite as satisfying as crossing things off your to-do list, and it's even better when you don't even have to get up off your couch. ♦

The original print version of this article was headlined "Smoke"