With the arrival of warm weather, outdoor public art projects in Spokane are picking up

Though the colorful sights surely help to brighten the drab days of winter,

the growing number of new public art installations around Spokane is perhaps noticed more when the sun's rays beckon us to head outdoors. With summer soon here, local artists are once again picking up their paintbrushes to liven up the city's streets, parks, underpasses and other communal spaces. Here's a round up of some of this year's public art projects overseen by the nonprofit Spokane Arts that are already underway, or coming up this summer:

On display since early this spring, three downtown skywalks near River Park Square have been turned into pop-up galleries paying tribute to a host of annual events and activities throughout the spring months, from April through June. Featuring the artwork of local artists Michaelanne Foster, Mallory Ware and Marina Gulova, the skywalks' glass panels showcase original art in each artist's distinct style, representative of events including Get Lit!, Bloomsday, the Lilac Festival, Spokane Pride, Hoopfest and Earth Day. All installations are visible from the street level; two of the decorated skywalks cross Main Avenue and the third crosses Post Street just south of the Square's atrium. Get an up-close view by heading to the second level of the mall, and take a loop from the skywalks around the corner from Bloem chocolates, then around the Melting Pot and MÜV Fitness, and back toward the mall near Nordstrom. The installations spearheaded by the Downtown Spokane Partnership will be up through the end of June.

Similar to previous years' projects featuring local artists' and students' work on portable plywood panels, Spokane Arts recently led a project to install 30 mural panels at Hillyard's Harmon Park. Students from the neighborhood's Shaw Middle School spent a recent Friday outside the classroom to paint murals they'd previously co-designed during brainstorm sessions with local artists who partnered on the project. The colorful, 4-by-8-foot panels began with base designs by 26 artists, including Tiffany Patterson, LauraLee White and Daniel Lopez. Shaw students then painted atop the artists' sketched outlines, leaving their own creative mark. The 30 panels are displayed along park fencing throughout the summer.

Continuing a project that began in 2015, Spokane Arts is currently seeking submissions for the third round of traffic signal box wraps to be installed later this year. The first year of that program saw 13 of the grey metal boxes that control the traffic lights downtown along Second Avenue decorated with local artists' digital designs. Last summer, more signal boxes downtown and in the Garland and Hillyard business districts were given visual facelifts.

"They're a comparatively small public art piece, but they have such a huge impact," says Spokane Arts Executive Director Melissa Huggins. "People really notice them and comment on them, and get really excited about them — even people who don't normally call themselves art lovers, so that is exciting."

Submissions for this year's round of signal box designs, to be installed along Division Street and in the Hillyard and the East Central neighborhoods, close on June 11. Interested artists can apply at spokanearts.org. 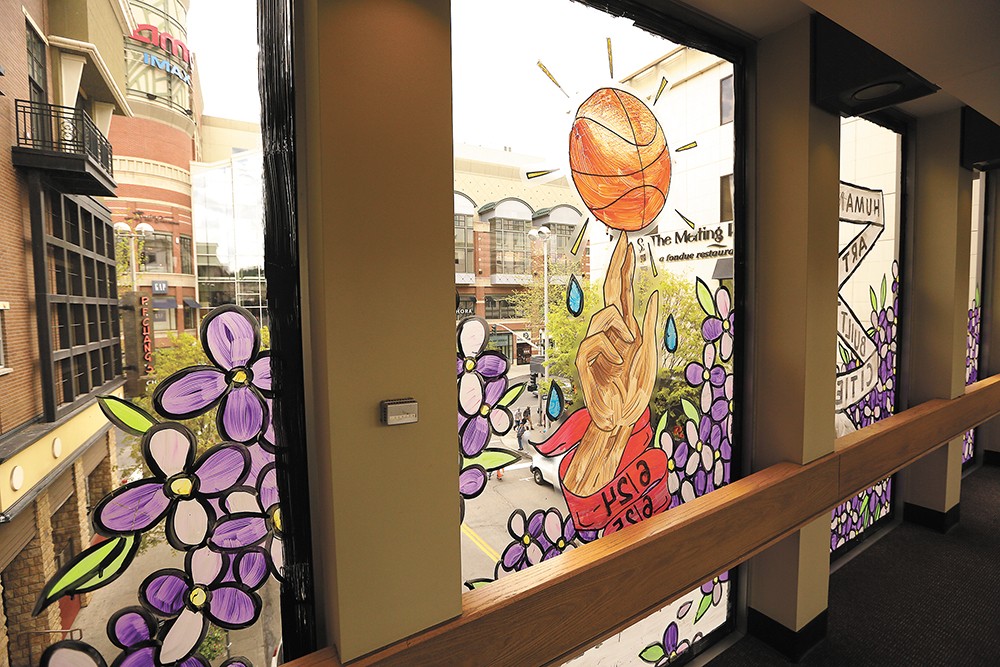 Another continuing Spokane Arts endeavor to update public murals around the city continues this summer. This year's focal project seeks to update the faded murals on the I-90 underpass at Altamont Street in East Central Spokane. The mural, as it currently exists, was painted 20 years ago, and Spokane Arts is seeking an artist or team of artists to refresh the concrete canvas with some input from East Central residents serving on the artist selection committee.

"Particularly because of the city's plans to develop that area and along East Sprague, we thought this would be a good time to refresh this mural," Huggins says. "We're trying to solicit as much community input as we can, and do it in coordination with the neighborhood, so they feel they have some say in what it looks like and how it connects to their neighborhood."

Proposal submissions for that project close soon, on May 31.

As it continues to support artists of all disciplines, Spokane Arts also recently awarded the second round of 2017 grant funding through its new SAGA (Spokane Arts Grant Awards) program, which has two more rounds of funding to be distributed this year. Interested artists can find the grant requirements and other details at spokanearts.org; the next round's deadline is August 1. SAGA recipients thus far include Millwood Print Works, ArtFest, Window Dressing and numerous individual artists, all of whom are listed on Spokane Arts' website.

Huggins highlights another public art project on the horizon, which involves lines of poetry being stenciled with spray paint onto sidewalks around the city. The featured poems were created last year as part of Spokane Poet Laureate Laura Read's "I am a Town" project, which sought public participation during workshops that guided participants in writing poems tied to specific places in the city. Thirteen selected poems will be painted at the spots that inspired their creators, in West Central, Browne's Addition, downtown and elsewhere.

So keep an eye out both above you and beneath your feet as you trek around the city this summer. ♦ 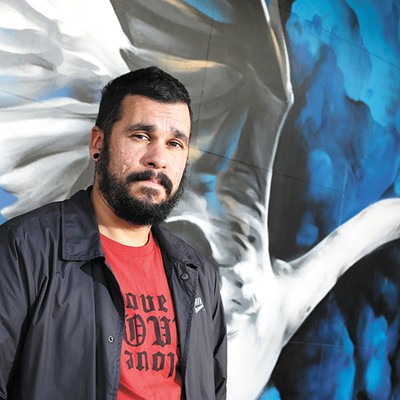