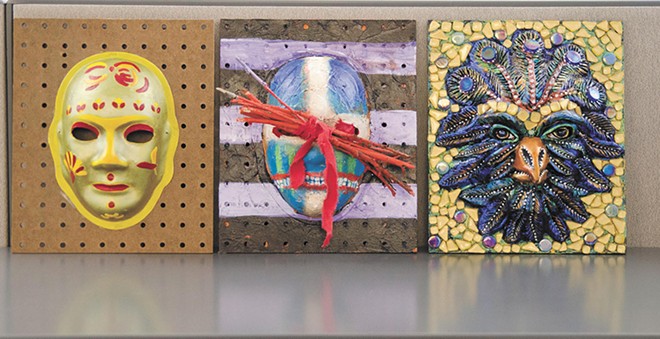 These masks will be auctioned off at this weekend's ArtFest.

in Spokane's Browne's Addition neighborhood, just as it has since 1986. The festival, produced by the Northwest Museum of Arts and Culture (MAC), features approximately 140 booths from local, regional and national artists, covering a wide range of artistic mediums.

It's a lot of creativity to take in — and there's also live music, food and a beer garden. A few notes about this year's ArtFest.

ArtFest doesn't struggle when it comes to receiving applications from artists to present at the festival. MAC development officer Jerry Smith, who oversees much of ArtFest, says they've actually limited the number of artist booths so as to not make the festival too cumbersome for patrons, while keeping artists from being lost in the shuffle. Smith adds that this year, the festival approached prominent local artists to show their works in the park.

One of those names is Ric Gendron, the veteran Spokane artist whose work has been prominently shown throughout Spokane and beyond. Smith says that although Gendron keeps a busy schedule touring with his art, ArtFest was able to lure him back into the fold this year, and that he'll be showing some new works.

Artfest also worked to bring in some new talents who have never participated, including Ben Joyce, the local painter who has completed installations and big-dollar commissions in the past year.

"We actually went out and recruited Ben Joyce. He's a first time ArtFest participant, believe it or not," says Smith. "He's obviously an artist of acclaim and does really well in markets far from Spokane, so we're very pleased to have him at ArtFest."

Speaking of notable people, some of the region's best-known artists have lent their talents to the MAC by painting masks for a silent auction fundraiser. The artists were given a blank, white cardboard mask and told to take it from there.

The resulting products are indicative of the range of talents of their creators, the museum says of the work by Gendron, Harold Balazs, Mel McCuddin, Melissa Cole, Ildiko Kalapacs and former Inlander art director Chris Bovey, Some opted for an elegant painting approach, while other artists added tactile elements to their masks, making it hard to believe that it started as blank mask.

The auction ends on Sunday afternoon and bids can be placed throughout the festival.

This year's ArtFest marks the last festival that Smith will help orchestrate. The MAC employee is retiring this year after a dozen years helping to produce what's become an artistic institution for the region. While Smith has certainly been integral to ArtFest's success, he's quick to lend credit to the rest of the ArtFest team, which includes a number of volunteers.

"I've never considered myself the producer or anything like that," says Smith. "You end up being a coach, trying to keep everybody focused on what it is they need to be doing to make something that's been around for 31 years, and is very important to a lot of people." ♦ 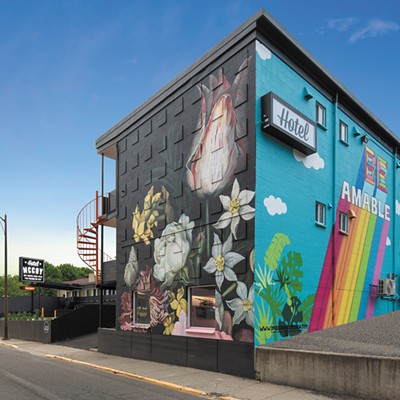