Your guide to Get Down in Browne's.

Monster Hip
It’s not exactly an invasion of the hipsters, but it’s a start. Boo Radley’s fans take note of the atypical inclusion of Justin Hillgrove in this year’s ArtFest lineup, a sign that the venerable arts and crafts fair is open to alternatives. (Yay!) Hillgrove’s robots, pop icons and literary figures would be as comfortable on the shelves of Boo Radley’s as they would on the pages of such pro-Pop Surreal magazines as Hi-Fructose and Juxtapoz. Works like “Emo Kid,” “Fey Gathering” and “Group Hug,” for example, combine the dark humor and monster-misfit qualities we’ve come to associate with two of Hillgrove’s favorite artists: Tim Burton (Edward Scissorhands, Beetlejuice) and Gary Baseman (Teacher’s Pet).

Although he’s unable to attend ArtFest, his friend and business partner Jenifer Vincent will be on hand with plenty of Hillgrove’s postcards, coloring books, prints and original paintings. Visit impsandmonsters.com.

Story Junkie
“It is in my nature to seek the unusual and find amusement in the discarded,” writes Chris Giffin. She creates mixed-media assemblages and “industrial folk art,” as she calls it, out of old paper, photos, wood, typewriter parts, doll pieces and other toys — even old tins discovered while “junking” between arts and craft fairs around the country.

“The stories in these old found objects,” she writes of the stuff she collects, “come together to form a new community in each piece of work, and a new story is told.”

Used whole or cut into pieces, tins line the shelves in her Jefferson, Oregon, studio — a converted 100-year-old church where she’ll make the jewelry, clocks, candlesticks and wall pieces for ArtFest. It’s the kind of eye-catching work made with superb craftsmanship that appeals to curiosity and nostalgia. It made her a hit at Inland Crafts, and it has turned her into a must-see on your ArtFest to-do list.

Balance and Flow
Watercolor is arguably one of the most challenging painting media because it’s not so much about controlling the paint as learning to go with the flow. While there are limitless types of watercolors out there — from tight, illustrative near-photorealistic works to loose expressions of color — the greatest appeal (for this artist, anyway) is the kind that strikes that magic and elusive balance between the two. Local artist Andy Sewell manages to do just that, especially in his close-ups of grapes on the vine, poppies in the field and even sparkling fish that he’s caught on the line and then recaptured in pigment on paper.

From his Website: “[Sewell] desires to paint what would be difficult or next to impossible to capture with a camera, yet possible to visually create in a painting. He strives for an almost photographic reality in places yet at the same time to produce an obviously painted image.”

Serendipity
Sweet and savory are two of our favorite flavors that, when combined, really pack a punch. How fitting is it that we found that blend in Natalie Warrens’ ceramics? Her low-fire pieces are funky, jubilant and often whimsical, with sugar-coated colors and a high-gloss finish typical of a highly controlled, modern painting and airbrushing technique. Her wood-fire pieces, on the other hand, are stately pieces that reference age-old forms with the subtle yet complex earthy surface decoration only available from wood-firing. In that gamut, Warrens succinctly summarizes the range of what contemporary pottery is about: a form that continues to reference the past and embrace the future.

“Both techniques seem so opposite,” writes Warrens, “yet I feel that what I learn about form and surface in low fire and wood-fire will only bring new energy to the clay and greater enthusiasm to my work.” (Carrie Scozzaro)

Musical Standouts
The good old Spokane boys of Prairie Flyer have crooning voices and a need for speed on the strings. Their Americana-bluegrass songs about mountain livin’ will take you back to a simpler time. Think Jimmy Buffett with a fiddle instead of a margarita. 3-4:30 pm.

The Booze Fighters
God, it feels good to wallow. To trudge aimlessly in your own self-pity, knee deep in remorse for the things you should have done. Your soundtrack is the blues, and if you’re from Spokane, the Booze Fighters are your guiding light. The trio has been killing audiences since 2006 with their classic blues renditions. The Inlander crowned them a 2009 Buzzworthy band but the nod is bittersweet. Guitarist Zac Fairbanks leaves for school at the end of summer, and the Booze Fighters will become another lost act. This might be your last chance to see them. Don’t miss out. It’s not worth the regret. Friday, 4-6 pm.

Finn Riggins
You never know what to expect with Idaho. Potatoes. Larry Craig. Finn Riggins. The Moscow trio is taking their experimental indie rock to all four corners of the country. Relentless touring combined with solitary confinement (they live in a cabin) has created unstructured, unconventional catchy tunes. And it’s working. Friday, 6-8 pm.

Shim
If Led Zeppelin were a cologne, SHIM would be dripping in it. Seattle’s classic-rock darlings personify an era of tight bell-bottoms, muttonchops and backstage sex. SHIM will bed you with their bluesy, guitar-laden anthems and send you home with ruffled hair. Friday, 8 pm.

Blood Hot Beat
The obscure band from Seattle is impossible to classify. They missed out on the grunge scene, they aren’t technical enough to be indie and, at times, their shredding is too hard for alternative rock. Saturday, 2-4 pm.

Real Life Rockaz
Think of it as a reggae co-op. A group of like-minded musicians banded together to create and maintain mutual aspirations. Real Life Sound — a reggae sound system created in Spokane nearly five years ago — aimed at just that. The co-op has since transformed into Real Life Rockaz. The band combines reggae, funk and afro with DJ-infused beats. Led by a Caribbean drummer and a funkadelic horns section, they’ve got just enough energy to make Spokane seem a little less inland. Saturday, 6-8 pm.

Son Dulce
Spokane’s only 12-piece salsa ensemble says it all. The band is a virtual melting pot of local musicians, and the authentic Latin music is easy to shimmy to. Spokane has its own Little Cuba. Son Dulce, 8 pm.

Whiskey Dick Mountain
Bring your bible and bourbon because Spokane’s wayward choirboys are taking the city by storm. The gospel-punk outfit has been touting their blend of religious rhetoric since 2006. Communion goes down smooth with a shot of whiskey. Sunday, 1-3 pm.

The White Buffalo
The California native’s voice has been compared to Eddie Vedder and for good reason. The singer-songwriter produces a hybrid of melancholy acoustic rock and country. Think Pearl Jam’s Into the Wild soundtrack. Sunday, 3-4:30 pm.

Space Opera 77
Balloons. Space suits. Apocalyptic overtones. Spokane’s own Space Opera 77 has all the makings of glam-rock musical-theater gods. Let’s see what they can do with an outdoor stage and music festival. Sunday, 4:30-6 pm.

Mount St. Helens Vietnam Band
Some bands rely on talent, others on friendly good humor. Mount St. Helens Vietnam Band is a quirky combination of the two. The Seattle quintet flickered onto the scene with a series of public service announcements, and in 2009 Scott Colburn (the man behind Animal Collective and Arcade Fire) produced their first album. It plays like an indie-rock Pop–Tart: At first bite, the sprinkles are noisy and fly at you from nowhere. Once you get to the sweet gooey center of staccato rhythms and dueling guitars, the taste is there but the texture’s not quite right. Give them a few more years and they’ll have perfect the flaky crust that brings it all home. Sunday, 6-8 pm.

James Pants
A comet from outer space came to Spokane, and James Pants was riding it. Nothing else could quite explain the persona or music behind this musician. Spokane was just lucky enough to see the blaze and feel the weight of a hole where he once hit. Sunday, 8 pm.

The crews in the food booths this weekend at Artfest are not listed among the artists displaying or demonstrating their work, but they should be. I am food-obsessed — my iPhone has more pictures of food on it than people — and in a culture reshaped by the Food Network, I’m not alone. More and more chefs regard their work as edible art.

I’d also be curious to know, when the receipts are counted after the festival, if more money was spent at the artists’ booths or at the food stands and in the beer and wine garden down the street. Think about it: only a percentage of the expected 30,000 attendees will buy art, but almost every one of the visitors will pay for something to munch or slurp while they wander.

If you plan to be one of these visitors, I recommend you map out in advance what your weekend food collection might include. Huli Huli Chicken will serve up their combination of chicken, cole slaw and beans. The SideWok Asian Café will offer chicken too in a variety of Asian incarnations. Wok-fried soba noodles will be flying out of the Island Noodles stand and the Baja Babes will grill and stuff shrimp tacos. Azar’s and Leonardo’s will take you food-touring to Greece or the Caribbean, respectively, with gyros, hummus and baklava, or platters with meats, saffron rice, black beans and salsa. Leonardo’s has no qualms about culinary exclusivity since they are also offering a funnel cake with fresh strawberries that you’d be more likely to find in Pennsylvania Dutch country than down on the islands.

Mary Lou’s Milk Bottle will offer up Americana on a plate: hamburgers, fries, corn dogs and huckleberry pie. Pizza Rita will be on hand to serve up slices for kids and adults alike.

New this year to the line-up of sweets is Cakes N Shakes with gourmet cup cakes and a milkshake they claim will be famous. They join Berry-Ka-Bob, Old Fashioned Country Kettle Corn, and Mary Lou’s Ice Cream. All want to woo you with sugar in various forms.

Then two blocks away you’ll find Elkfest with a life of its own: beer, barbecue and bands playing in the center of Cannon Street. On one side of the street will be the Elk’s beer garden and their famous Moon Burgers as well as a special Southwest Caesar Taco with charbroiled chicken breast, red onions, crushed tortilla chips, black beans, romaine lettuce, Monterey jack cheese, and chipotle Caesar dressing. On the other, a second beer garden run by Pacific Avenue Pizza will also be serving up pints and hard alcohol along with slices of their chicken and chicken pesto pies and sandwiches. If this isn’t enough sustenance while you are listening to the music, several feet to the south Café Marron will be grilling house-made brauts and dishing out pulled pork.

Disagree if you like, but I’m of a mind to call nearly all of this edible art. (Kevin Finch) 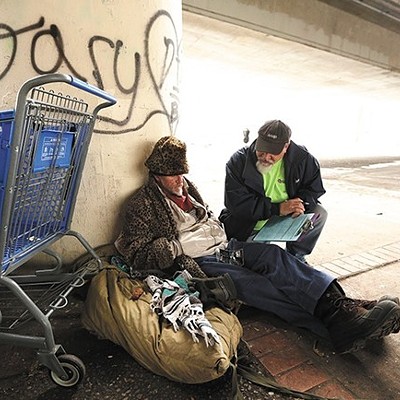 Your guide to the Inlander's 2019 Gift Guide