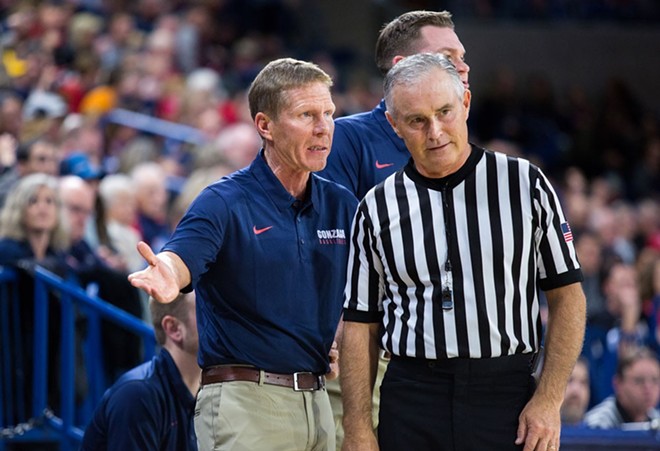 
The calendar is turning to 2021 and the Zags will set their sights on some familiar foes as West Coast Conference play gets underway this week.

As has been the case for the better part of two decades now, Gonzaga’s the heavy favorite to win the WCC for what would be the 24th time in program history. That was the case before the Zags set foot on the court this season. After defeating teams ranked No. 3, No. 6. No. 11 and No. 16, the conversation shifted from the Zags being expected to win the league to the Zags being expected to run through the league without a loss.

So, what stands between Gonzaga and an unblemished 27-0 record come Selection Sunday?

“San Francisco is somebody that played us really tough last year and they’ve got a lot of those guys back,” head coach Mark Few says.

That sneaky-good San Francisco squad will visit Spokane on Saturday. The Dons have been a program on the rise for the past few years. Kyle Smith spent three seasons as head coach in San Francisco, from 2017 to 2019, before parlaying his team’s success into a jump to the Pac-12. He’s now the head coach at Washington State. His successor, a baby-faced 30-something named Todd Golden, has picked up right where Smith left off. The Dons won 22 games a season ago, are 6-4 so far this year and own a win over then-No.4 Virginia.

The Dons’ dynamic backcourt of Jamaree Bouyea and former Central Washington hooper Khalil Shabazz lead the way for a high-powered offensive team. San Francisco shoots the three-ball better than any other team in the league, having connected on 37.5 percent of their attempts this season. Gonzaga, by comparison, is fourth at just 34.5 percent.

While the Dons have been on the up lately, and managed to pull off some upsets, they still haven’t taken down the Zags. That will be a tall task this season.

There are some teams that have shown the ability to beat Gonzaga, though, even when Gonzaga’s ranked number one in the country. Those pesky Saint Mary’s Gaels did exactly that just two seasons ago, in the final game before Selection Sunday. Gonzaga had won all 17 games against WCC foes to that point. BYU did it two years before that, in the final game of the regular season, when top-ranked Gonzaga was sporting a 29-0 record.

Those teams are both still in the league, and they’re still just as good as ever.

“I thought Saint Mary’s had some nice wins early and obviously BYU’s had some nice wins,” Few says. “These guys are familiar with us and they’ve played us a lot. Obviously not having The Kennel, the fans and everything here, kind of evens the playing field quite a lot so we’ll have to be ready to go every night out.”

The Gaels lost their three best players from the past few seasons, Jordan Ford, Malik Fitts and Tanner Krebs, so this year was supposed to be a rebuilding season. Especially considering their starting point guard, Tommy Kuhse, is a redshirt senior who wasn’t even a scholarship player until this year. Well, turns out he’s earned that scholarship by leading the Gaels in scoring at just under 15 per game. Kuhse has led the Gaels to a nice 8-2 record as of press time.

BYU also lost a three-headed-monster from last year’s team. The Cougars were projected to earn a high seed in the NCAA Tournament a season ago, before it was canceled. This year they may not get a high seed, but they’re in position to earn an at-large berth once again. Second-year head coach Mark Pope has the Cougars well ahead of where pundits expected they’d be this season. Alex Barcello (16.9 points per game) has taken over as the team leader, but the Zags really need to worry about the Cougars’ transfers. Purdue’s Matt Haarms, all 7-foot-3 of him, was the most sought after transfer on the market this past offseason. He and 6-foot-11 Richard Harward give the Cougars size to match Gonzaga down low.

The rest of the league is as strong as ever, too. Only two teams enter conference play with a losing record. San Diego sits at 1-3 after a disastrous non-conference slate which saw the Toreros pause all activities twice due to coronavirus. Pepperdine is probably the only true disappointment in the WCC. The Waves were expected to contend for an NCAA Tournament berth this season, and a triple-overtime loss to a ranked UCLA squad early in the season seemed to confirm that belief. Since then they’ve lost more than they’ve won, though, and enter WCC play at 4-5 on the season. That said, they’re pretty much the exact same team as last year’s squad that took Gonzaga to the wire in The Kennel.

Gonzaga’s the heavy favorite in the WCC, but the Zags’ rising tide has lifted all WCC boats. Of course the Zags are far and away better than everyone else in the league.