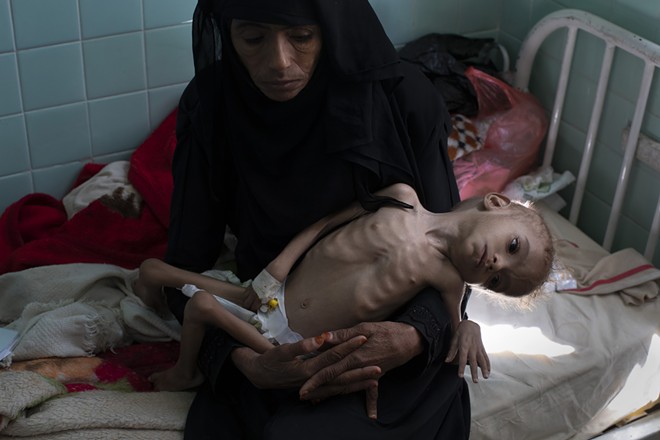 Tyler Hicks/The New York Times
Bassam Mohammed Hassan, who suffers from severe malnutrition and cerebral palsy, is held by Madiya Ahmad, at a hospital in Sanaa, Yemen, on Oct. 15, 2018. Growing international concern over the dire humanitarian situation in Yemen, where the United Nations warns that a mass famine is looming, led to a concerted diplomatic push late October by the U.S. to finally get both sides around the peace table. But the pace of fighting has only escalated.

HODEIDA, Yemen — The fight in Yemen has escalated dramatically over the past week, exacerbating a dire humanitarian crisis that the United Nations says could spiral into famine — despite, or even because of, a diplomatic push by the United States to get both sides to the peace table.

The Saudi-led coalition, which the United States has armed and supported, has launched a punishing wave of airstrikes against the rebel Houthis. The warplanes have hit targets in the capital, Sanaa; in the mountainous northern provinces; and in the Red Sea port of Hodeida where, aid workers warn, the country’s main humanitarian lifeline hangs by a thread.

A senior aid worker and two Western officials, who asked not to be identified so they could speak openly about Hodeida, said in interviews that the coalition, commanded locally by the United Arab Emirates, had redoubled its five-month offensive to snatch the city from Houthi control.

Columns of Yemeni militias fighting under the coalition flag have burst across a major front line and swept through the desert on the eastern edge of the city, threatening to encircle it completely, they say. Warplanes and attack helicopters have pummeled Houthi positions in the city in what aid workers called a near-continuous barrage of air attacks.

Inside the city, local people reported that Houthi fighters had entrenched themselves, taking up positions in apartment buildings, hospitals and homes. At least 150 fighters from both sides have been reported dead so far.

Tens of thousands of civilians, including some who only recently returned to the city during a lull in fighting, are sheltering in their homes, anxiously waiting.

Even with the clashes, the port of Hodeida, which lies just north of the city, is still working. On Tuesday, seven ships were at berth with an additional eight waiting to dock, including one vessel containing 10,000 tons of relief grain, the Western officials said.

The surge in fighting started days after U.S. Defense Secretary Jim Mattis called for the Saudi-led coalition and the Houthis to start peace talks within 30 days.

The surge in fighting may stem from a Saudi desire to score territorial gains before any talks.