As its 11-year-old lead points out, Matilda the Musical uses contrast to pack an emotional punch 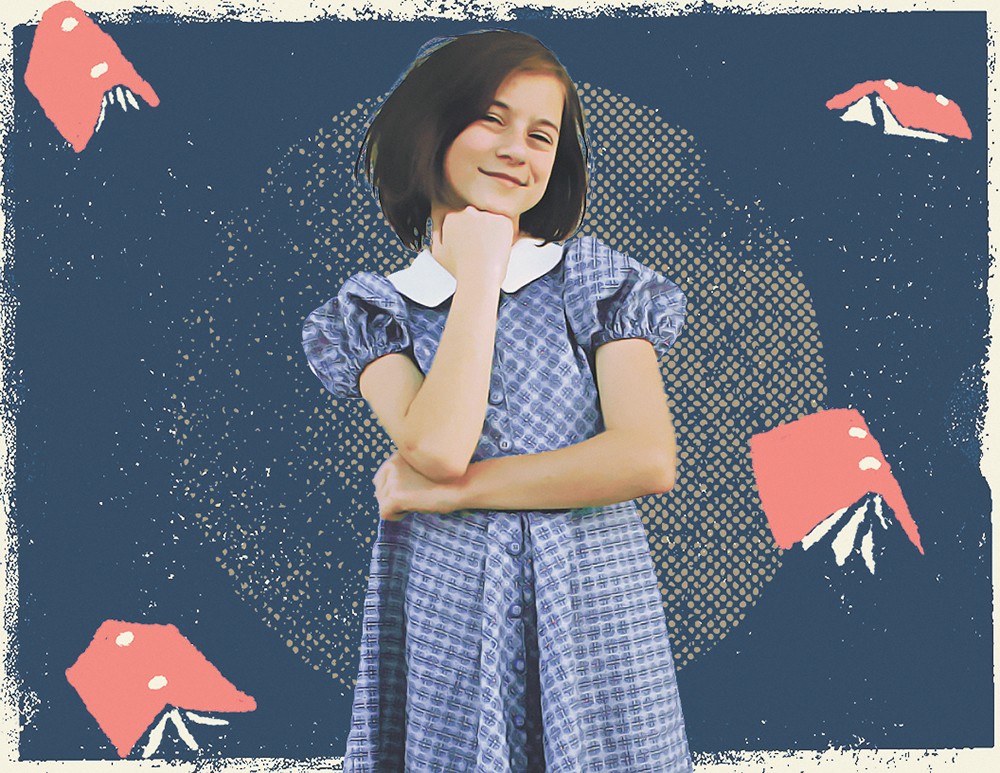 Eleanor Weitz plays Matilda in her first role at the Spokane Civic Theatre.

Like the Roald Dahl book on which it's based, Matilda the Musical is the tale of a highly intelligent little girl with a penchant for practical jokes and, at least briefly, the uncanny ability to move things with her mind. And, just like its source material — not to mention pretty much all of Dahl's most famous work — this tale features a few adults who are unassumingly kind and others who are unusually nasty.

In Matilda the Musical, one of the nastiest is Ms. Trunchbull, a school headmistress who dreams up punishments so outlandish that the students won't even be believed by the rare sympathetic ear. It's a particularly wicked kind of cruelty that makes Kathie Doyle-Lipe a bit uneasy, even as she's directing the show for the Spokane Civic Theatre's 2019-20 season opener.

"I have to admit, some of the stuff that Ms.Trunchbull says is just downright evil. And I know it's a show, and I know it's all pretend. But I'm old," she laughs, "and it still bothers me to hear some of that stuff. I generally like things lighter and fluffier."

Some of Ms. Trunchbull's menace is mitigated by the fact that the role, in the long tradition of British pantomime, is quite clearly played by a man. In this case, it's Doug Dawson, a veteran local stage presence who Doyle-Lipe says is an inherently "funny guy" and, as a side note, the first actor she's ever directed in drag. As scheming and sadistic as Ms. Trunchbull might be, she can't fully escape an aura of camp.

That's something that has certainly resonated with her cast. While Doyle-Lipe might wince at some of Trunchbull's more barbed comments, the young actors who make up the musical's large ensemble have trouble taking her character seriously.

"Right now, I'm trying to get them not to laugh at Trunchbull. They're supposed to be afraid of her. But Doug is so big and tall and lanky that he comes over and screams at them, and they're all fighting the giggles. It's hysterical."

Matilda herself — or rather, Eleanor Weitz, the 11-year-old actor who plays her — shares that take. She says that the show's more sinister characters, including the Wormwoods, her bullying onstage parents, are defanged by how "outrageously weird" they are.

Theirs is also a necessary evil, because it's meant to contrast with the sweetness of characters like Ms. Honey (played by Shelby Fressmeyer), a teacher who recognizes and encourages Matilda's precociousness. Big, overt baddies also give Matilda something to overcome as she discovers her self-worth.

As Weitz puts it, "The darkness of some characters brings out the light in other ones."

Matilda the Musical marks Weitz's first-ever Civic role. She got her start at age 6 in a Spokane Children's Theatre production of Tom Sawyer and has performed in about eight local productions since then. Her ultimate goal is to be a professional actor.

"I was really hoping for [the part of] Matilda, but it was one of those things where I would have been happy with any role. When I got the part, my mom threw a tiny party and then we all went out for Thai food. At first, I was like, 'Oh, is this really happening?' And then I started getting excited."

Doyle-Lipe says that Weitz has "a real naturalness about her" in an important, emotionally complex lead role.

"Her instincts are wonderful. There's a song called 'Quiet' where she's talking to herself about the noise in her life. And she acts that thing out beautifully. She about had me in tears."

Fittingly, the baddies get a song called "Loud." ♦