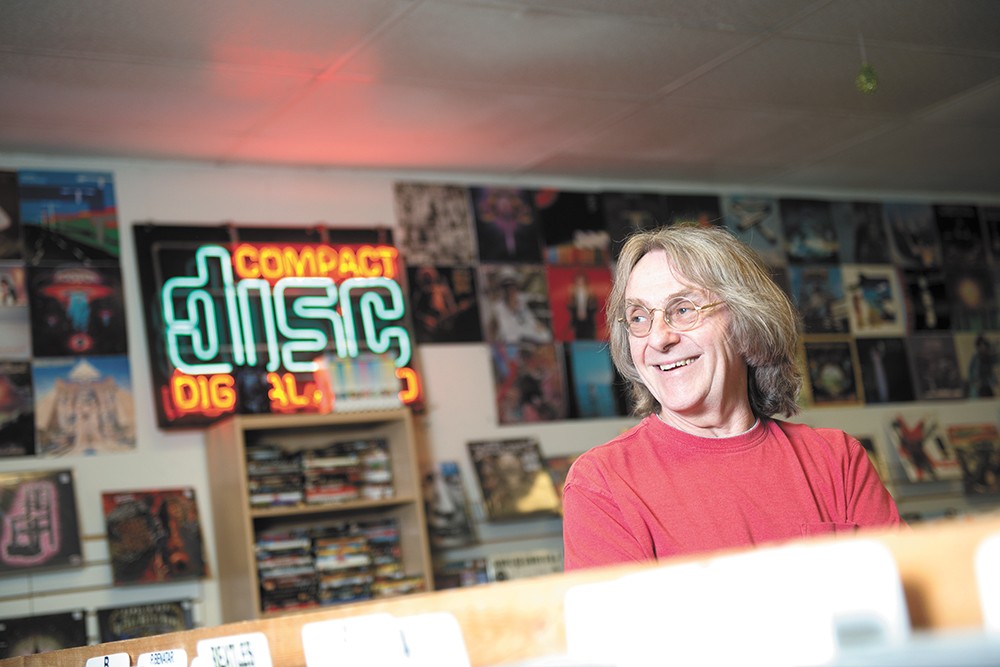 As long as 4,000 Holes has been selling records, owner Bob Gallagher has been the smiling guy behind the counter. But as it heads into his 30th year of brick-and-mortar business, Spokane's oldest operating record store is about to have a for-sale sign on it.

Gallagher has always been the primary employee of the North Monroe institution — the person who opens the store in the morning and closes it in the evening, who stocks the shelves and knows which box has your newest vinyl treasure in it. It's his dream occupation. But he's now 67 and has been contemplating retirement for a while.

"I've always been reluctant," Gallagher says of passing the store on to someone else. "But it's six, seven days a week, with very few days off. Not that it's a bad job or I sweat or anything, but it's just the time.

"One of my problems is I like rock 'n' roll way too much."

Rock has, in fact, dictated most of Gallagher's life: While the actual store may be celebrating its 30th birthday this weekend, the 4,000 Holes name has been around longer than that. Gallagher is a lifelong music fan and Beatles obsessive, and he began selling records by mail order sometime in the late '70s, and then at swap meets, record shows and Beatles fan festivals. He was even a booking agent before he got into peddling vinyl, until he realized he "wasn't crooked enough" to work in the music industry.

And then it was in 1989 that 4,000 Holes opened its first storefront on West Shannon Avenue in the Emerson-Garfield Neighborhood. It moved to Monroe a few years later, and then a couple blocks down to the space it has occupied since 2004. With its orange, yellow and green logo, the store represents a pop of color and sound in an otherwise nondescript building on the 1600 block of North Monroe, and true to form, it'll be ringing in its 30th anniversary with a full day of music on Saturday.

Gallagher has operated 4,000 Holes like his favorite (now-defunct) childhood record stores — the Record Rack at Shadle Center ("They knew me really well," Gallagher remembers) and Little Nell's, also on Monroe. When the old Strawberry Jams vinyl shop on Browne and Sprague closed down, Gallagher even inherited their front counter, the one he still stands behind.

4,000 Holes, then, is something of a composite, made up of DNA fragments of record stores past. But it has nonetheless carved out its own identity in its three decades, a milestone Gallagher says he never expected to reach: "Just like all jobs, you do it every day, and then it's 30 years."

Gallagher reflects on 4,000 Holes' long history on a hot Friday afternoon, occasionally pausing to ring up a purchase or help a customer find a record they're looking for. The store experienced a surge right out of the gate, he remembers: Within its first few years in operation, grunge took off, Washington's music scene started drawing attention and CDs were growing in popularity. Gallagher has looked on as the record industry went through some of its most seismic changes — cassettes being eclipsed by CDs, streaming technology usurping physical media, the recent resurgence of vinyl.

"I always knew records would come back," he says, "but I didn't know they'd come back this big."

Other record stores have come and gone since '89, but Gallagher says the vinyl landscape has arguably never been better than it is right now.

"Every year is consistently better [for business], which surprises me to no end," he says. "I think the town's got a real good future with record stores."

It's the customers, though, that have kept Gallagher coming back to the store every day — the weekly regulars, the first-time visitors who wander in and leave with armfuls of records, the longtime collectors who now have children and grandchildren that peruse the store's racks.

"I've met some wonderful people, some true friends that are well beyond whatever I do here," he says.

And now it's time for him to move on. Gallagher says he wants to focus more on playing his own music: He performs regularly in the blues-rock band Blue Canoe, and with his wife Beverly as the acoustic duo Starlite Motel. He wants to sell the store on his own terms, to another music nut who's willing to be as entrenched in the business as he is.

Those kinds of major life decisions, to quote a Beatles solo classic, don't come easy. But Gallagher knows the store still has potential to grow: Perhaps the back wall could be knocked down to expand the floor space, and he's always wanted to build a small stage that could host more in-store performances.

"You don't find a town this size with this many record stores," Gallagher says. "If you can make a bigger space, bring in more product, the store has a chance to keep going."

But that doesn't mean he's going anywhere, necessarily. In fact, you might still see him behind that counter, beaming from behind his John Lennon spectacles and hunting down a rare record just for you.

"I wouldn't mind working here for a few hours once in a while," Gallagher laughs. "I mean, I don't want to not do records. I'm too good at records." ♦

WHO'S PLAYING THIS WEEKEND?

The 4,000 Holes 30-year celebration will be an all-day musical party on Saturday, starting with a lineup of in-store performances at 2 pm and continuing at 8 pm at the Big Dipper.

Beginning at the store itself (1610 N. Monroe), you can check out the Gallaghers' own Starlite Motel ("I generally don't play at my own event," he says, but this one is an exception). Also on the roster are some artists who, back in the '90s, released music on the short-lived 4,000 Holes record label: Ball of Destruction is Gallagher's "favorite sloppy punk band," and local musicians Brian Young, Bill Barrington and Jamie Frost are "some of the best songwriters in town, as far as I'm concerned," Gallagher says.

Head over to the Big Dipper later that night to see Gallagher's other band Blue Canoe, who will open for the ever-mysterious Gorilla, Rabbit and Chicken. If you've never seen them, they crank out classic-rock covers in the exact identity-shrouding costumes you'd expect.

"They're one of my favorite bands of all time," Gallagher says.

The evening closes out with the glam-rock of Atari Ferrari and the bluesy jams of Fat Lady, two bands that Gallagher reckons are amongst the best Spokane has to offer right now.

"I'm trying to have a little bit of everything, and try to touch base with my friends," he says. "I'd like to have those people who made a difference to the store."