Young Kwak photo
Shylar Thompson is back in school after help from an intensive mental health program.

Long before a pandemic struck, before she started high school largely from behind a computer screen, and before she broke up with her boyfriend, Shylar Thompson never really had things easy.

The now-15-year-old sophomore at East Valley High says both her parents struggled with addiction, so she and her sisters bounced around, spending time in foster care, then with their mom for a while, until ultimately they landed with their grandma.

Thompson dealt with traumatizing experiences throughout childhood. By January 2021, as pandemic hospitalizations soared, stressors were piling up in Thompson's personal life, including difficulty with school and struggling to reconnect with parents back in the picture. That's when she says she hit the lowest point in her depression.

"I've kind of been, like, always suicidal. I have been since I was in fourth grade," Thompson says from the couch inside her favorite coffee shop in Otis Orchards. "It just progressively was getting to a point where I felt like I couldn't take it anymore."

Her older sister found her in her room as she was about to attempt suicide. Thompson says her sister stayed up talking with her all night, then drove her to the Providence Sacred Heart emergency room in the morning.

After staying there for about two weeks, she was able to get admitted for inpatient services at nearby Inland Northwest Behavioral Health hospital and start working to address her mental health struggles.

But Thompson says it was several months later when she got into Providence's intensive outpatient program RISE that she really felt able to connect with peers going through similar experiences and learn skills to move forward with a hopeful outlook. After seven weeks of treatment, she graduated from the program in October.

"It really helped me because they were just letting me know it's OK to not have it easy," Thompson says. "It's gonna get worse before it gets better. You can't just magically be happy. You have to work on yourself."

Throughout the pandemic, mental and behavioral health experts have been closely watching for an increase in crises among people like Thompson, whose already tumultuous home lives could be exacerbated by things like school shutdowns and isolation from support systems.

Increases in depression and anxiety have been seen in young people over the last decade or more, with stresses from things like the climate crisis looming large, says Dr. Erik Loraas, a child and adolescent psychiatrist who works with the RISE program at Providence Holy Family hospital. But the pandemic is also taking a toll.

"In some ways, that's what we're really seeing is a lot of despair for a whole host of reasons," Loraas says. "The trend was already there, and this [pandemic] added fuel to the fire."

From February to March 2021, suspected suicide attempt ER visits were up nearly 51 percent nationally among girls ages 12 to 17 compared with the same time in 2019. The increase among boys was smaller, at 3.7 percent.

Though the impacts of the pandemic won't be fully understood for years, behavioral health experts have been working on new resources in recent years. One resource that launched just before the pandemic was RISE, which provides nine to 22.5 hours of intensive outpatient therapy per week, enabling patients to essentially get years of therapy in weeks, explains Kristin Reiter, RISE program director and a licensed independent clinical social worker.

"The progress they can make in six to eight weeks, it's amazing," Reiter says.

That stands out against other adolescent outpatient programs offered regionally, she says. It may ultimately serve as a model for success as program graduates praise the help they get there. 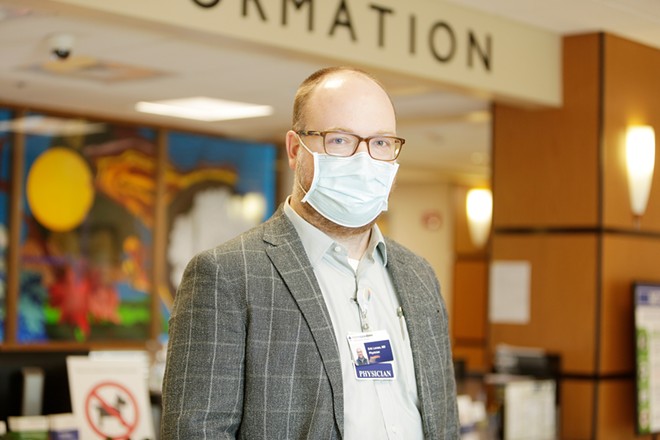 On March 26, 2021, Gov. Jay Inslee declared a state of emergency regarding child mental and behavioral health.


By that time, Sacred Heart Children's Hospital had seen a dramatic increase in adolescent behavioral health needs, with a 73 percent increase in admissions to its inpatient psychiatric unit for kids in 2020 over 2019. Hospitals on the west side of the state had a sharp uptick in admissions for youth suicide attempts and saw many new diagnoses of depression and anxiety.

As families have struggled with the pandemic, so have adolescents, Loraas explains.

"Kids who were once kind of riding that fine line are now in crisis," Loraas says. "There's uncertainty about what the future is. ... What does the individual do in the face of something this large?"

In a self-reported survey conducted with Washington students in March, nearly 58 percent of high schoolers in grades 9 through 12 said they felt depressed or sad most days over the past year. About 13 percent reported planning suicide during the previous 12 months.

While not a perfect comparison to the COVID-focused survey questions, high schoolers around the state were asked similar questions for the 2018 Healthy Youth Survey. At that time, 40 to 41 percent of 10th and 12th graders surveyed reported feeling sad or hopeless for at least two weeks in the past year, while 18 percent said they had made a suicide plan in the past year.

"How can we remove whatever barriers there are, perceived or actual, to get kids the service they need?" asks Sara Schumacher, director of outpatient services for Inland Northwest Behavioral Health and former director of Excelsior.

Inland Northwest Behavioral Health was designed to keep ERs from filling up and to get people the help they need sooner. The hospital offers inpatient and outpatient services for youths and adults. When someone has to wait to get treatment at the behavioral health center, Schumacher says she and other hospital systems try to get them into faster alternatives elsewhere.

Hospital spokesman Dan Barth, who has been the behavioral health lead for Spokane County's pandemic response, says that a lot of people don't realize they can walk right into Inland Northwest Behavioral Health for themself or their child without going to Sacred Heart first.

"The grand irony is more often than not, they get referred to our hospital, and could've saved themselves eight hours and an ER bill," Barth says.

What's more, anyone who shows up seeking help will be referred to proper care with a safety plan put in place, even if they don't need Inland Northwest Behavioral Health's services, Barth says. That safety planning is free.

"That's part of the game-changer shift in accessing mental health care that our hospital presents to the community," Barth says.

Other youth resources in the community are offered by Frontier Behavioral Health, Excelsior and mental health counselors who work through local public schools, on top of therapists and primary care providers who can point families in the direction of programs such as RISE.

For Thompson, it took awhile to find the right fit for treatment. In previous groups, she says she felt like other teens weren't taking things seriously or made triggering jokes.


At RISE, she says she found other people who'd been through similar experiences, who she felt really cared.

"If you really take things seriously," Thompson says, "and you just really take it in for yourself, that's just what matters the most."

Many of the teens who enter RISE have already gone through some other form of treatment.

Sometimes they've talked to a family doctor or a therapist, or they've been referred from another mental health treatment program in the area as they work on "step down" strategies to get back to a more normal routine, Loraas says.

Teens meet from about 9:30 am to 2:50 pm, two to five days a week, and then return home each evening to apply the skills they've learned, often in the very environment that's created some of the stress in their lives. For teens needing the highest amount of care, the program is considered a partial hospitalization.

Participants meet individually with a therapist and medication prescriber at least once a week and attend daylong intensive outpatient group therapy. Four different group sessions each day focus on everything from art therapy and yoga to learning how to snap the body out of the anxious "fight or flight" mode.

Thompson says one of the skills she appreciated learning the most was "paced breathing," where you focus on breathing in and out slowly while drawing a box on your leg or tracing your hand. That skill has helped her get through moments of anger when dealing with family, she says.

"I'm not gonna lie, skills are really, really hard when you need them the most," Thompson says. "But, like, once you just really start doing them, it really helps."

RISE program director Reiter says she's worked at other intensive outpatient programs in the area that last a year or more, with a few hours of therapy per week. But the intensity at RISE seems helpful, she says.

A few times per week, staff and teens gather to celebrate someone who is graduating from the program.

"It's a big deal when someone graduates," Reiter says. "It's good for us as therapists as well to see that what we're doing makes a difference. ... I haven't worked anywhere where I've seen this type of progress. The clients speak to it themselves."

While the waiting list for RISE has at times been around 100 young people long, now, for the first time since the program started in 2018, there's no waitlist at RISE for teens or adults.

"That's huge for us," Reiter says. "Now we're able to get people in faster and when they need it."

Part of the reason RISE staff think there's been a reduction in the waitlist is a hesitancy among some parents and teens to agree to time out of school now that in-person classes are back. Reiter says Providence staff are in the process of figuring out afternoon and evening hours that could work better for teens in that situation, and they expect to offer that option starting in early 2022.

Once Thompson got into the program in September, she says she was able to start important therapy and set up the next steps so she could return to school full time by the end of October.

She wouldn't say she's fully better after graduating the program, but Thompson says RISE did encourage her to think differently about her situation and motivated her to speak out and help others. She's already referred another friend to the program.

"So many people are going through so much, but a lot of people just need to know they aren't alone and, like, really take that in," Thompson says. "If there wasn't hard days, we wouldn't enjoy the good days. I'm still here."♦

The original print version of this article was headlined "Rising Above"