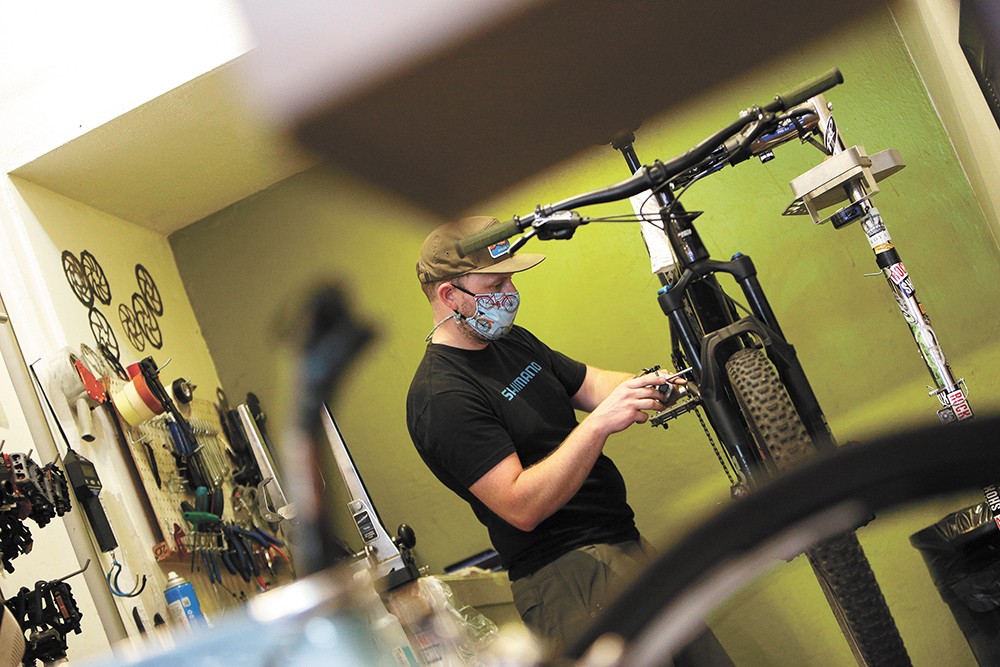 But that doesn't mean the outdoor recreation industry as a whole is struggling in the same way. In fact, local businesses say there's just as much demand for outdoor supplies and activities as there's ever been.

For Schneider, the shutdown due to the COVID-19 pandemic presented an opportunity for the store formerly known as Northwest Outdoors consignment shop. He decided to rebrand as Rambleraven Gear Trader during the stay-home order. They launched a new website and started doing some mixed retail. In June, he says, sales are up compared to last year.

"We used it to our advantage," he says. "Sales have been great. Feedback has been good."

Yet while some businesses try to recover from being shut down, other outdoor businesses were spared from the shutdown completely. Bike shops were considered essential under the stay-home orders, because some people use bikes as their only form of transportation.

Tim Dunn, manager at the Bike Hub in downtown Spokane, says business was slow for about a week in early spring, but it quickly started to ramp up after that. Now, business is booming.

"This has been one of our busiest years," Dunn says.

Why? Because if people can't go to the gym, there's not much else to do to keep fit besides ride bikes, Dunn says. They're actually having a hard time keeping up. With everybody deciding they want a bike, they're running out quickly — especially mountain bikes and hybrids.

"The other day, three bikes came in and they all sold in under 24 hours," Dunn says.

The situation is a bit different for outdoor guide companies like ROW Adventures, which leads rafting, kayaking, biking and fishing trips in Spokane and Coeur d'Alene. Owner and founder Peter Grubb says the company didn't run any trips in May. Instead, they developed protocols to maintain physical distancing and sanitation for when trips resume.

ROW Adventures started running some trips on the Spokane River in mid-June, but trips are limited to a maximum of 12 people. Raft trips have been reduced from seven people to four, and they're encouraging people to use kayaks, which Grubb calls the "ultimate physical distancing" tool. Simple things like having the guide tighten straps on a life vest have been scrapped — instead, the guides encourage two members of a household to check each other's straps.

They're reminding those wanting to schedule a trip to wear a mask, unless ROW doesn't have to provide transportation to the river.

But the May closure did hurt business, he says. The company had to lay off staff, and they're losing money because there's no international travel.

"Normally May is a good month for us," he says. "In June we're expecting 80 percent less business than normal."

Up until early June, the people calling were mostly just canceling trips. In the last three weeks, he says, "that's reversed."

"We're getting sign-ups, and a lot of last-minute, three days to 10 days in advance trips," he says. "More last-minute calls than normal."

Grubb says they should be fine down the road, mainly because they were doing well before the pandemic.

"If you weren't on solid footing going into this, it could be difficult to survive," Grubb says. "Somebody asked if I was ever worried about going out of business. This is our 41st year. I kind of tell people defeat wasn't really an option." ♦

The original print version of this article was headlined "Natural State"