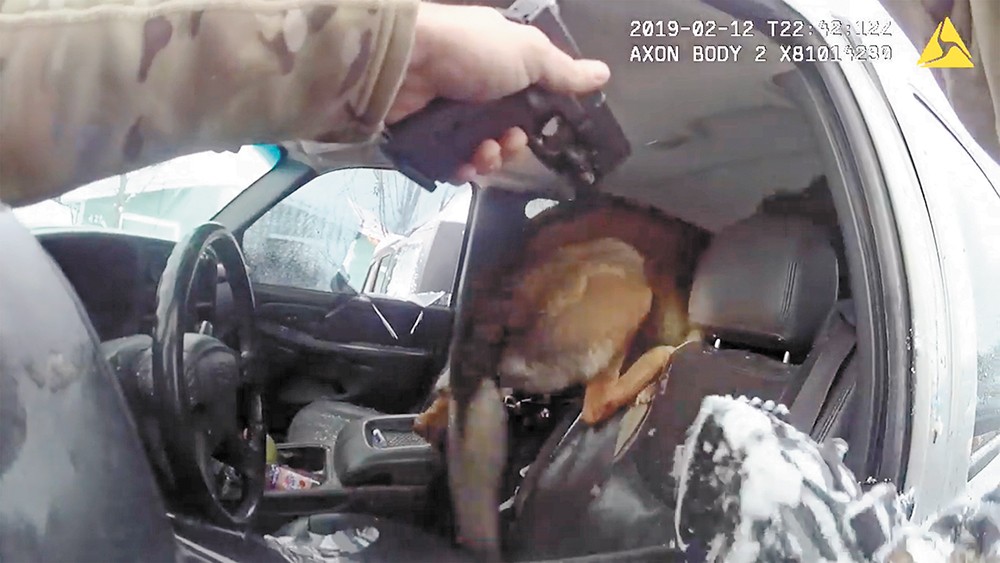 A screenshot from police video of the controversial Feb. 12 arrest.

"I'm going to f—-ing kill you." That's what Spokane Police Officer Dan Lesser shouts at a man five times during a controversial arrest. And this is after he had used his baton to smash out the driver's side window of a truck that the man is in.

The man, 29-year-old Lucas Ellerman, had led officers on a car chase after fleeing a traffic stop before his truck got pinned in a snowbank. Ellerman initially wasn't being compliant and had told Dan Lesser that he had a pistol. Eventually, Dan Lesser tells another officer on the scene, Scott Lesser, his nephew, to get his canine. "You're going to get bit right now, get the f—- out here," Dan Lesser tells Ellerman, who had retreated to the backseat. "I'm going to put a bullet in your brain."

Footage of the Feb. 12 incident, recorded on the officers' body cameras, was released last week, along with the Police Department brass' determination that the force used in the incident was justified. Local politicians and community members were outraged. Now, some attorneys and policing experts around the country are reacting with shock.

"Wow. That's pretty bad. That's pretty bad," Seth Stoughton, a former cop and current associate professor of law at the University of South Carolina who specializes in policing, says as he watches the footage. "I don't think there is any real question that the officer had lost control of the situation and lost control of his ability to self-regulate. He is expressing his rage."

"God. There are so many things wrong here," says Donald Cook, a Los Angeles-based attorney who has decades of experience bringing lawsuits over police-canine incidents. "This cop has got a problem. He has got a real anger and violence problem."

Dan Lesser has been with the department since 1995; efforts to reach him for comment were unsuccessful. He has been involved in five officer-involved shootings since 2003, and in 2013, Lesser was cited for failing to announce a canine deployment when his dog attacked a bystander, according to documents obtained by the Inlander through a public records request.

"This department has got a real problem for standing up behind this guy," Cook adds. "This guy is unfit."

"The behaviors looked more like a tantrum than a trained police officer," says Jeffry Finer, a local attorney who helped successfully sue the city of Spokane over the death of Otto Zehm, an unarmed man who was fatally beaten and tased by Spokane Police in 2006. "Police don't have the luxury of losing their patience like that. That is unprofessional. It gets people hurt."

Stoughton argues that Dan Lesser's initial decision to run up to the truck and bust out the driver's side window was a reckless tactical error since Ellerman may have been armed.

Stoughton adds that "good police training" tells officers to not run up on cars they've been pursuing and keep a safe distance from which they can yell commands like, "Put your hands outside of the vehicle."

"It doesn't show restraint to say, 'I'm going to f—-ing kill you, I'm going to put a bullet in your head,' that is not de-escalation."

"You stand back, you take a couple of breaths, you wait for other officers. Time is on your side in policing in most situations," he says. "You take a position of relative safety using cover and concealment and you start issuing, maybe with a loud speaker, verbal commands, while you wait for additional officers."

Cook, the attorney, concurs: "You never go rushing up to a car like this idiot did," he says. "This is how cops get shot and killed."

Spokane Police Capt. Tom Hendren, one of the high-level officers who deemed Dan Lesser's uses of force during the episode justified, also seems to agree on this point.

"The initial decision to approach the suspect vehicle and smash out the driver's window placed Officer Lesser in a dangerous position," Hendren writes in a use-of-force review report obtained by the Inlander through a public records request. "When he is in the process of breaking out the window he is completely vulnerable to an assault with a firearm."

"Additionally, by placing himself at the door, he does not have any cover and greatly reduces his time to react if the suspect did brandish a deadly weapon," he adds. (Before the traffic stop, police had received a tip that Ellerman might be armed.)

As for Dan Lesser's use of profanity and threats — such as "I'm going to put a bullet in your brain" — Stoughton says that his language illustrates how untethered he was in the moment.

"This isn't just an incidental use of profanity in the course of an officer giving instructions," he says. "The officer, at that point, has lost control of himself. The officer can't self-regulate. And if an officer loses control of themselves and their own emotions and adrenaline, how can they possibly expect to effectively control the situation?"

Finer, however, criticized this characterization.

"It doesn't show restraint to say, 'I'm going to f—-ing kill you, I'm going to put a bullet in your head,' that is not de-escalation," he says. "And then to call that 'de-escalation' makes me doubt that they have any idea what that word means. It's not the de-escalation that this [police] force has promised the community they would work on."

Dan Lesser's decision to hoist a canine into the cabin with Ellerman after he indicated that he was coming out also drew condemnation.

"What he was doing was he was out of control, he was going to punish this guy for not doing what he wanted him to do fast enough," Cook says.

"One big problem is the guy appears to be doing what the officer is telling him to do right before the dog is introduced," Stoughton says. "Even if he was noncompliant or resistant, you don't get to use force based on what he was doing before — you only get to use force if the current situation justifies it."

"A dog is used as a compliance tool," he says. "You saw a guy with two felony warrants, known to have a gun, he's in the back seat, he isn't coming out, they told him [that they would] send in the dog and they finally did. I think it's good."

In his police report, Dan Lesser claims that Ellerman was "looking for a way to escape and feigning cooperation" before he used the canine. He adds that he was concerned that Ellerman had a pistol and there was no safe way to enter the truck because it was pinned.

Cook says that the courts wouldn't look favorably on Lesser's use of the canine during Ellerman's arrest: "I think a court, in this particular case, because of the video, would look at this and say, 'This crosses the line.'" ♦