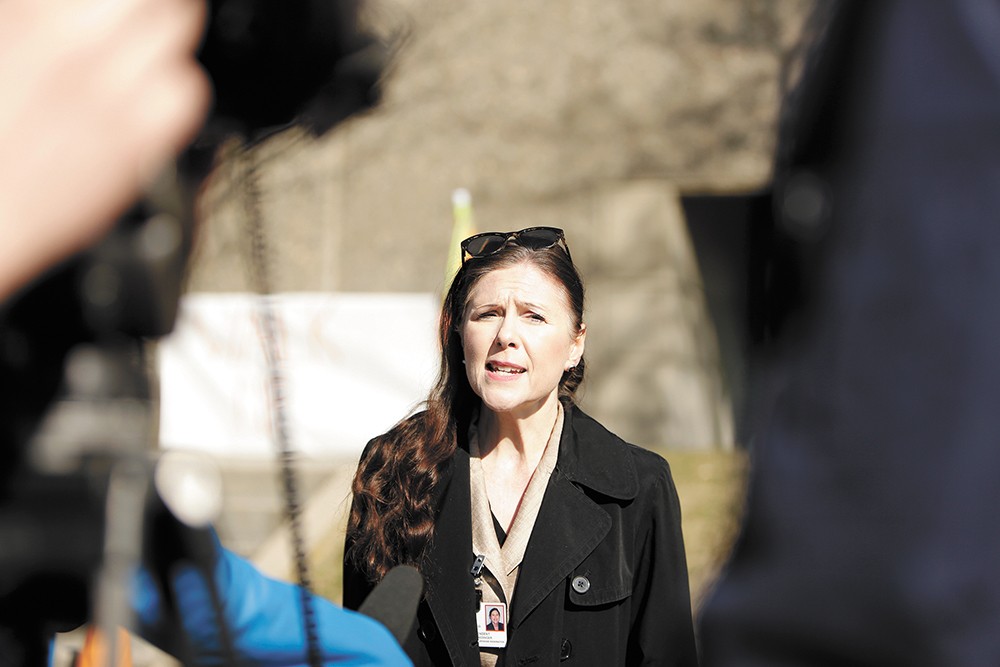 Rather, when she took over as superintendent for the district eight years ago, she intentionally took a collaborative approach.

"I like to get a lot of input from different stakeholders. My leadership team is always seeing what everyone thinks and gets a lot of input before we make a decision." Redinger tells the Inlander. "But then we make decisions. And sometimes that's the hard part. Not everybody is going to necessarily agree."

As Redinger prepares to leave Spokane Public Schools to lead the Richland School District, she's looking back on her tenure in Spokane. Her collaborative approach served her well in what she considers the district's greatest accomplishments during her time as superintendent: Working with community organizations to raise the graduation rate, partnering with the city to help cut costs on bond projects, and listening to community activists who demanded a reduction in arrests and suspensions for Spokane students.

But Redinger's departure comes at a critical time for the district. She happens to be leaving just as members of the Spokane Education Association, the local teachers union, wanted to hold Redinger accountable for the budget issues facing Spokane and the turnover within district administration. Multiple sources indicated to the Inlander that SEA was considering holding a vote of no confidence in Redinger just days before she announced she was resigning.

In the announcement, Redinger said she plans to leave the district by July 31. But as soon as that announcement was made last Tuesday, the union sent a letter to the school board requesting that Redinger leave sooner than that.

"We find no compelling reason to keep her in the superintendent's position past June 30," the letter says.

It also requested that the school board appoint Adam Swinyard, currently associate superintendent, as the interim superintendent, saying that "without a clear leader who provides continuity and stability, we face potential chaos."

On Saturday, the school board agreed, and it went even further, making Swinyard the next superintendent without the interim title.

Redinger says she's not surprised that teachers and staff in Spokane have had concerns with the current budget issues. But she's not looking back with much regret.

"The decisions we made," she says, "I stand behind."

PROGRESS MADE
When Redinger started as superintendent eight years ago, the graduation rate was just 75 percent, which was actually an improvement from a few years earlier. She remembers seeing billboards around town lamenting the poor graduation rate.

"I was like, 'That is not helpful,'" Redinger says. "Let's work together on it!"

"I'm very, very proud of that," Redinger says. "That was the hard work of our staff and partnering with our community partners."

That's just one of several accomplishments under Redinger's tenure. In particular, she says she's happy the district was able to offer more options to families. The district began a Spanish immersion program, and it expanded the On Track Academy, the Community School and Spokane Virtual Learning, she says. Spokane was also the only school district in the state to authorize charter schools. There are two currently in Spokane, with another planned to open soon.

She's also proud that the community supported projects for new school buildings. In 2018, Spokane Public Schools passed its largest bond ever, a $495 million measure that allows the district to build new middle schools in order to accommodate moving sixth grade to the middle school level. That change also should help ease overcrowding in kindergarten classrooms. It was made possible by a unique partnership with the city, which involved land swaps benefitting both the school district and the Spokane Public Library.

"The school district talked for years and years about moving to a K-5, 6-8 model, and we got it done," Redinger says. "I feel that is really important, and that's done and moving forward."

Halfway through Redinger's time as superintendent, community activists started to raise serious concerns about the discipline rate in Spokane Public Schools. By 2016, Spokane was disciplining students with suspensions and expulsions at a higher rate than nearly any other district in Washington, and it impacted students in special education and students of color at disproportionately higher rates. Students of color were also much more likely to be arrested than white students.

Since then, the district has pushed for restorative practices that have dramatically dropped the number of suspensions, expulsions and arrests in the district — though the racial disparities still remain. In June, the school board passed a racial equity resolution that vows it will eliminate arrests of students by any school employee.

BUDGET ISSUES
The district budget, however, has been an ongoing challenge for Spokane Public Schools, as it has been for other districts in Washington. In the last decade, the landmark McCleary court case, which argued the state underfunded education, led the state Legislature to pump in more state dollars for education while limiting a local school district's ability to generate local revenue through levies. That hurt Spokane, which relied heavily on local levies.

"When that changed, it had an adverse effect on our school system," Redinger says.

It impacted teachers, who argued the new state money should go toward pay raises. Indeed, in summer 2018, Spokane Public Schools and the Spokane Education Association negotiated huge pay raises for teachers. Both sides knew the deal would put the district budget in the red, but it was approved anyway.

When the state then gave some more flexibility in local levy funds, Redinger pushed for Spokane to put a supplemental levy on the ballot earlier this year. But in a close 3-2 vote, the school board rejected it.

Redinger says she was disappointed.

"We needed that levy," she says. "I was very vocal about that."

That vote took place just weeks before the COVID-19 crisis hit. And amid the pandemic, the budget projections look dire again, causing teachers to question what next school year will look like. In a budget forum SEA held last month, the union's leadership expressed frustration with Redinger, asking how they can hold her accountable. The SEA sent out communication saying "we are developing a plan for all of us to hold her accountable. These forums and communicating with [the] board are our first steps."

SEA President Jeremy Shay acknowledged to the Inlander that members were concerned — not only with the budget, but with the amount of turnover within the school district, which included recent resignations of Linda McDermott, associate superintendent, and Ramon Alvarez, executive director of Human Resources. McDermott, Alvarez and Swinyard led the bargaining negotiations with SEA.

"Consistently having new leadership at the top, it filters out to changes and practice at the building level," Shay says.

Despite multiple sources indicating that the SEA was preparing to hold a vote of no confidence in Redinger, Shay — a day before Redinger announced she was leaving — insisted that wasn't the case.

Redinger says she didn't know anything about any planned vote of no confidence. She says the district turnover should not be a concern, adding that, in her view, "change is continuous improvement." In McDermott's case, she had been with the district for 11 years and left to take a promotion elsewhere.

But as soon as Redinger announced she was leaving, SEA wrote the letter to the school board pushing for her to leave sooner than later. Between the questions about how to reopen schools in the fall and the recently passed racial equity resolution, the SEA and district will have plenty to bargain this summer. The letter criticized Redinger for pushing for a memorandum of understanding on the duties of teachers in distance learning this spring.

The letter pushed for Swinyard — "the only person with bargaining experience left" — to take over.

"We see Adam as someone who has demonstrated a willingness to work with us, which we see as vital in mapping the path into the uncertain future we face," the letter says.

Redinger says her leaving is a family decision. She applied for several jobs around the country earlier this year, trying to find a good spot for her and her husband, an engineer. In Richland, she gets to return to where she got her first teaching job in a place that works for the whole family, she says. She grew up in Eastern Washington and says she's glad to continue serving students here.

"We felt really good about it," Redinger says.

When asked if she's worried that she's leaving now, as the district faces so many difficult decisions, Redinger says she "thought a lot about that." While she says there's "never a good time" to leave, she points out that Spokane Public Schools is getting started on a new strategic plan, with a relatively new school board.

"In that case, I think it is a good time," she says. "I think Spokane is situated in a really good place. And I'm not going that far." ♦

The original print version of this article was headlined "Collaborative Leader"