As The Matrix returns to theaters this week, we look back at the Wachowskis' mind-melting sci-fi masterpiece

There's been a lot of talk recently about how many great movies came out in 1999. Sure, it might have given us The Phantom Menace, but it also produced future cult classics like Fight Club, Office Space, Being John Malkovich and Magnolia, as well as some of the most influential box-office hits of the last couple decades — The Sixth Sense, The Blair Witch Project, American Pie and, right at the top of that heap, The Matrix.

Lilly and Lana Wachowski's visionary sci-fi/action hybrid struck a chord with '90s audiences, the deceptively complex story of a benign computer programmer who discovers his version of reality might very well be a simulation. The groundbreaking film returns to IMAX screens for a weeklong engagement starting Thursday, and it's right on the heels of an announcement that a fourth Matrix installment will reunite original stars Keanu Reeves and Carrie-Anne Moss with writer-director Lana Wachowski.

We're taking a look back at The Matrix and its sequels, the films it lifted from and the films it inspired, and whether or not it's still as immersive as it was in '99.

First things first — does it still hold up?

Short answer: yes. Despite the fact that it launched some subpar imitators, the Wachowskis' original vision remains pretty miraculous, and the way it gradually introduces us to the inner workings of the Matrix, making us more and more complicit in their sleight-of-hand, is still brilliant. Its characters — Reeves as the prospective messiah Neo, Moss and Laurence Fishburne as resolute hackers Trinity and Morpheus — are drawn with the sharp-edged simplicity of the best mythical figures, and those action scenes are still as thrilling and baffling as ever.

What critics thought at the time

Contemporaneous reviews were mostly positive, with plaudits coming from Time, the Washington Post, the A.V. Club and Roger Ebert, who praised the movie's look but found its storytelling shallow. There were detractors, too: The Boston Globe called it "klutzy" and Entertainment Weekly knocked its "soullessness," while the San Francisco Chronicle sniped, "It's astonishing that so much money, talent, technical expertise and visual imagination can be put in the service of something so stupid." All three of those publications would write positive reviews of The Matrix Reloaded four years later.

Of course, none of them could have predicted the tremendous success of The Matrix, an original cultural property from relatively unknown directors that became the fifth highest-grossing film of the year and won four Oscars. And, of course, the idea of alternate digital dimensions wasn't exclusive to The Matrix: It was earlier explored in another Keanu movie, Johnny Mnemonic, and in Kathryn Bigelow's underrated Strange Days (1995), and the Wachowskis were also heavily indebted to the anime Ghost in the Shell. But it was the film's "bullet time" action sequences, which seemed to meld stop-motion and real time, that wowed audiences. Those scenes were spoofed in everything from Charlie's Angels to Shrek, and the film's slick, straight-faced style was duplicated in films like 2002's Equilibrium.

The Wachowskis have claimed they always intended to stretch the story into a trilogy, and parts two and three — Reloaded and Revolutions — were released just six months apart in 2003. I still remember bounding into the theater with my buddies for the opening weekend of Reloaded, only to leave two hours later scratching our heads. By the final act of Revolutions, it was pretty clear the Wachowskis had lost the plot. The sequels certainly have their defenders — and Reloaded has a couple terrific sequences, namely an extended freeway chase that one-ups every action set piece from the first film — but few would claim they're better than the original. The world was further fleshed out in various spin-offs, from the animated anthology The Animatrix to video games and comic books.

The runaway success of The Matrix pretty much guaranteed that the Wachowskis would have carte blanche on every subsequent project, which has resulted in some of the strangest big-budget films ever produced. Their Cloud Atlas is a daring, wildly uneven three-hour sci-fi epic that stretches across multiple centuries and continents, and the truly batshit fairy tale Jupiter Ascending is worth a look. Their 2008 bauble Speed Racer, a live-action take on the Japanese cartoon show, has also developed a fervent cult in the wake of its initial critical drubbing. But all their pet themes are established in The Matrix — vast interconnected worlds, morally pure heroes fighting unjust systems, and the shapeshifting nature of human identity. It's really the Rosetta Stone for unlocking the rest of their work. ♦

The Matrix is not showing in any theaters in the area. 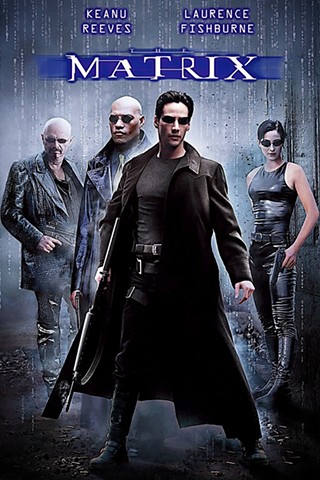 A look at the best scores by the late, great film composer Ennio Morricone

From Attack of the Clones to Empire we pick our favorite adventures in a galaxy far, far away