For months, Pepper Fox has been pleading for the world to pay attention to the murder of her son, Jason.

While authorities have yet to determine a motive, Pepper is convinced that Jason, 19 at the time of his death, was killed in Newport, Washington, because he was gay. She's spread that message both to the media and the internet.

"This is my attempt to get ahold of Ellen Degeneres and Lady Gaga," Pepper Fox says on a TikTok video.

Josh Helfgott, LGBTQ+ advocate with more than 3.3 million Tik Tok fans, stitched that to his own post and gave a response.

"I'm not Gaga, but you want your son's story to go viral, and I think I can help," Helfgott says, explaining what's been reported about Jason's murder.

That TikTok post has garnered more than 1 million likes. The hashtag #justiceforjasonfox has nearly 13 million views overall, and Pepper's own TikTok profile has taken off as well.

"I couldn't believe it," Pepper tells the Inlander. "This really hit hard for a lot of people at home."

Pepper says she has evidence proving her son was killed because he's gay, but law enforcement in Pend Oreille County remains hesitant to say his sexuality was the reason he was killed. Four men have been charged with murder in connection with his death.

While search warrants indicate Fox had previously had confrontations with those men, investigators have yet to put together a clear picture of what happened the night of Jason's death.

"I'm glad that people are interested and paying attention," says Glenn Blakeslee, Pend Oreille County sheriff. "I hope people will reserve judgment until we get to court and facts can be presented in a thorough manner."

The night Jason was killed, just past midnight on Sept. 14, 2020, he sent a relative the address of Timber River Ranch, a wedding venue where he planned to meet friends.

Jason was uneasy about going because he didn't want Riley Hillestad to be there, court records show. He asked the person encouraging him to come out, Claude Merritt, if Hillestad would be there before going.

"Where's ur place and is it fr not Riley?" Jason asked on social media, using "fr" as a shorthand for "for real," court records say. "Like I fr wanna kick it, I just ain't down for drama."

Jason was killed that night, and his body was found weeks later buried in a shallow grave at the ranch. In police interviews, the four men charged with murder — Hillestad, Merritt, Matthew Raddatz-Freeman and Kevin Belding — all indicated they were at the ranch that night, but none admitted personally to killing Jason. A witness indicated that Hillestad that night operated a skid steer, a type of excavator, around the area where Jason's body was located. 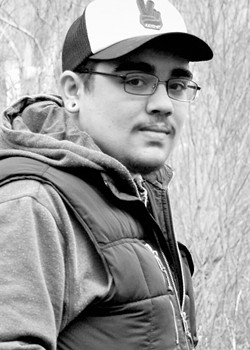 Investigators have access to social media records that reveal how Jason had a recent history with the men accused of murdering him. A Google account Pepper provided to deputies contained nude photos of Merritt, along with photos of other unidentified men, according to a search warrant. There were also screenshots of text conversations with Jason involving threats back and forth, but investigators have evidently not been able to confirm the identity of the people in those texts.

Investigators have screenshots of a text conversation between Raddatz-Freeman and Fox that took place on June 27, months before Jason's death. Both appear to be threatening each other and referencing a previous altercation. At one point, according to the search warrant, Raddatz-Freeman says, "I wasn't playing around that night if you hadn't of backed up your car like you did you probably wouldn't be here man." This conversation took place three days after Fox made a harassment report to the Pend Oreille County Sheriff's Office saying that Raddatz-Freeman swung a pipe at his car and then bullied Fox into giving up money.

A month later, on July 31, Fox made a malicious mischief report to the sheriff's office saying that both Hillestad and Raddatz-Freeman smashed the windshield of his car. Fox at the time said that Hillestad had an assault rifle and yelled "about how he wanted to shoot" Fox, a search warrant says. Afterward, Fox posted on Facebook calling the two "the biggest pieces of shit I've ever met in my whole life," saying they destroyed his windshield after blaming Fox for someone taking their license plate, the warrant says.

Pepper says she has since been able to get into Jason's iCloud account, where she's learned more about Jason's history with the people in jail for his murder. Investigators requested a warrant for that account.

"Pepper Fox continues to claim on social media that she has information proving that the murder of Jason Fox was a hate crime and should be prosecuted as such," the warrant says. "I believe that Jason's iCloud accounts likely contain more information that is relevant to this investigation."

A judge granted a warrant for those records on April 6.

Pepper believes it will prove that the murder of her son was a hate crime.

"It's so heartbreaking," she says. "It's so hard to look at some of this stuff."

Michael Fox, Jason's father, says he's glad that people on TikTok are angry about the murder of his son.

"It shouldn't have happened regardless of the motive," Michael Fox says.

Previously, he was skeptical that the evidence in the case would rise to the level of a hate crime. But having seen more evidence since then, he's a bit more confident that it is.

"I think there's a pretty good argument to be made that it is a hate crime," he says.

Still, he says things have been exaggerated on TikTok that he's uncomfortable with. Specifically, he says he's seen some people say Jason was tortured and dismembered. Authorities have said that is not true.

But Pepper says the attention on social media has reminded people that it's still difficult to grow up gay, especially in a rural town. She says because of that attention, she was able to help lead a Pride parade in Newport earlier this month in honor of her son.

"It hit a heartstring with a lot of people. There's a lot of gay men who either grew up in rural areas or their parents rejected them after they came out as gay," Pepper says. "He could have been them." ♦