As they face pressure not to isolate or restrain students, local teachers encounter violent behaviors 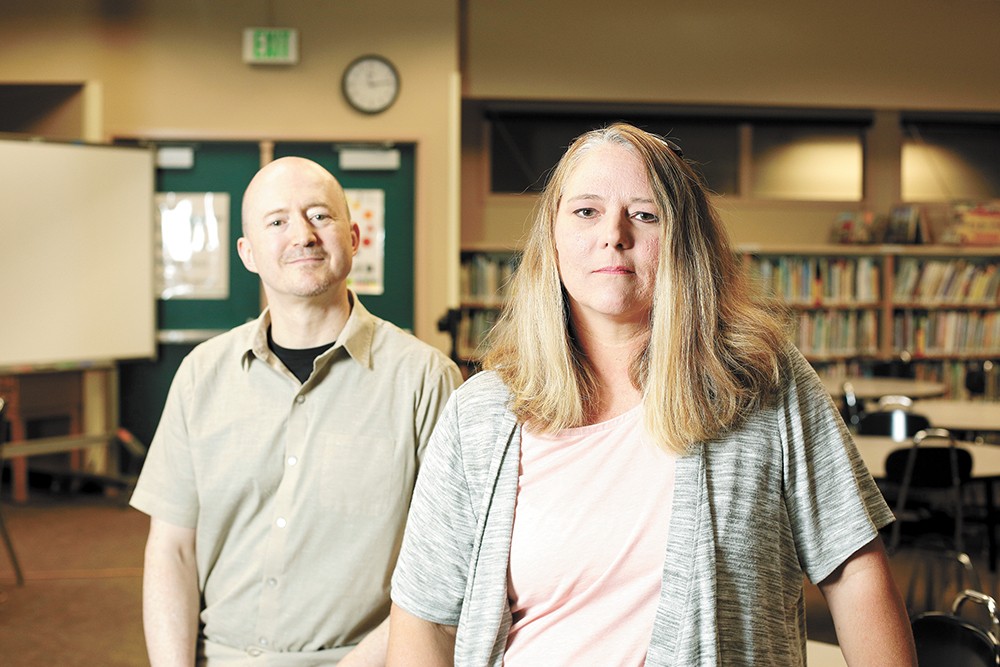 As someone who teaches the youngest children in Spokane Public Schools, Roni Gross has become used to violence.

"I've been hit and kicked and punched and broken and hurt," says Gross, a Logan Elementary K-3 special education teacher.

For teachers like Gross, student violence can be part of the job. And it's a part of the job that teachers and school principals say can often be missed when discussing the use of isolation or restraint of students.

In the 2017-18 school year, there were 85 staff injuries while administering isolation or restraint of students in Spokane Public Schools. That number, however, is likely far lower than the actual number of injuries to staff, as many injuries go unreported. Gross, for instance, very rarely reports any injuries to the office — not even when a student punched her in the face and broke her glasses.

"In the time I've been at Logan — I just finished my fifth year — we've had staff members who've had their noses broken, bites that break the skin, punches, kicks," Perdue says. "Sometimes [students have] climbed out of windows."

Simultaneously, there's pressure on teachers not to isolate students unless there's an imminent likelihood of serious harm. Yet that line can get blurry when a student is out of control. Last month, the Inlander reported that the state Office of the Superintendent of Public Instruction says Spokane Public Schools is "overusing" isolation, which involves locking students in what is often a padded room.

Gross, who was not involved in any investigations the Inlander referenced in previous stories, says she will isolate a student on occasion, but only as a last resort.

Perdue has been an administrator in four different schools. But in recent years, he says he's noticed a difference in the kinds of behaviors he's seen from students.

"I don't know that the behaviors are worse, but they present like they're worse because I do believe the volume is greater," he says. "I think there are more kids with those levels of needs."

Perdue doesn't want to come off like he's blaming kids. There are a variety of factors contributing to why a student may have behavioral issues at a young age, like family poverty, a lack of mental health care and childhood trauma. At Logan Elementary, 90 percent of students are considered low-income, according to state data. As Gross puts it, students in her behavioral intervention class are "tiny people with big things happening in their lives and ... there are things they don't have control over."

Teachers in Spokane have spent the last decade getting trained to handle kids who may be dealing with challenges at home. Spokane Public Schools has also emphasized so-called "restorative practices" in the last several years, which focuses on alternative ways to change a student's behavior before suspension and expulsion. But elementary schools in Spokane have seen less progress than secondary schools in reducing exclusionary discipline since 2014-15. Elementary suspensions or expulsions are about even overall when comparing 2018-19 to 2014-15, according to Spokane Public Schools data. Secondary grade levels, meanwhile, have seen decreases in exclusionary discipline in the same time.

There was an adjustment period for teachers with restorative practices. But Stephanie Lundberg, principal at Holmes Elementary, says the school has seen "a fair amount of success" in exclusionary discipline.

"The district is not saying exclusionary measures can never be used," she says. "They're saying there's not a lot of research to support that suspending a child is going to change behavior."

State officials say that isolation and restraint, similarly, should never be used as a punishment. Holmes Elementary put students into isolation more than 500 times in the 2017-18 school year, among the highest of any school in Spokane, according to state data. Part of that has to do with the fact that Holmes is one of the schools in Spokane with a behavioral intervention program. Still, Lundberg says it's "absolutely" a goal for Holmes to reduce that number.

Lundberg views the student behaviors in recent years differently than Perdue: The volume of incidents is the same, but the incidents have become more extreme.

"This year alone I had two separate teachers punched in the face," she says. "It wasn't unintentional ... this was a targeted punch to the face. That was a new thing we haven't seen."

This past school year, Holmes tried a pilot program to support students in behavioral intervention. The goal, Lundberg says, was to "try something different" with students. It was one of two elementary schools in Spokane to jump on the pilot.

"We wanted to create an environment for our kids that would be more therapeutic in nature," Lundberg says.

Some students had heart rate monitors to track when they're becoming upset. The class also varied instructional strategies, with some students taking online courses through Spokane Virtual Learning. A specialist was on site to support kids when they needed it. Lundberg calls it a "step in the right direction."

Students could also use more mental health support in school, Perdue says. Logan, for instance, has one mental health counselor. But he argues that's not enough.

"The challenge there is we have over 400 kids who attend the school," he says. "And there are way more than 24 kids who could benefit from that."

Gross, the teacher at Logan, emphasizes early intervention as a way to change student behaviors and ultimately keep themselves — and teachers — safe. She thinks about behavior as a skill, just like math or reading, and students need to be afforded the opportunity to fail before they learn new ways to respond to stressful situations. She says she sees more success with students she's able to work with at a younger age.

"A big part of my job is to help them see that school can be fun and safe and silly," Gross says.

For Gross, safety is her No. 1 concern when a student becomes violent. Yet it's not necessarily her own safety she's worried about. It's the safety of the student and others in the class. If she does decide the isolation room would be useful, she monitors to make sure the kid is OK.

"Often," she says, "they don't even remember that they hurt you." ♦

The original print version of this article was headlined "'Hit, Kicked and Punched'"