As wildfires get worse, insurers pull back from riskiest areas 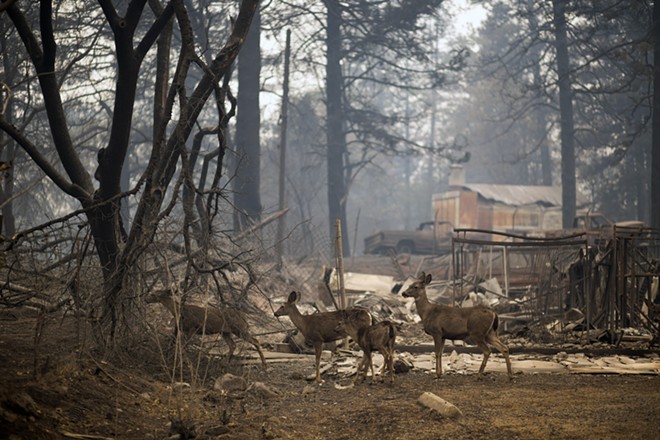 Jenna Schoenefeld/The New York Times
Deer forage in the burnt landscape of Paradise, Calif., on Tuesday morning, Nov. 13, 2018. Search teams were heading back into the devastated town on Tuesday with the grim expectation of finding more bodies in the charred remnants of the Sierra Nevada retirement community.
By Christopher Flavelle
The New York Times Company

WASHINGTON — Insurers are quietly reducing their exposure to fire-prone regions across the Western United States, putting new pressure on homeowners and raising concerns that climate change could eventually make insurance unaffordable in some areas.

Officials in California, Washington, Montana and Colorado are getting more complaints from people whose insurance companies have refused to renew their coverage. The complaints follow years of record-setting wildfires in both size and cost, a trend scientists expect to continue as global warming accelerates.

“I think that we are not far away from a lot of weather-related events being too expensive for most people to purchase comprehensive coverage,” said Carolyn Kousky, executive director of the Wharton Risk Center at the University of Pennsylvania. “What happens then is the big question.”

On Tuesday, California’s Department of Insurance issued a report quantifying that pullback. For the ZIP codes most affected by the wildfires in 2015 and 2017, the number of homeowners dropped by their insurance companies jumped 10% between 2017 and 2018.

The trade group representing insurers said the fires of the past two years had compelled companies to reduce their exposure. Whether that pullback is temporary or permanent depends on what the state does next, according to Rex Frazier, president of the Personal Insurance Federation of California.

Versions of that trend are playing out across the West.

In Montana, insurers have changed the way they evaluate wildfire risk, according to Bob Biskupiak, the state’s deputy insurance commissioner.

Decisions that were once made based largely on how quickly a fire department could reach the property now involve third-party analytics companies, Biskupiak said. Those companies examine everything from the surrounding timber and grass conditions, the slope of the ground, where the prevailing winds come from and the conditions on nearby land.

Insurers have used that information to be more discriminating about what they choose to cover. “Company A, B or C has insured me for 10 years — I’ve never had a loss,” Biskupiak said, recounting the type of complaint he’s heard. “And then all of a sudden this year they’re nonrenewing me.”