A young artist designs for the Spokane Symphony by day, and paints tiny artworks by night 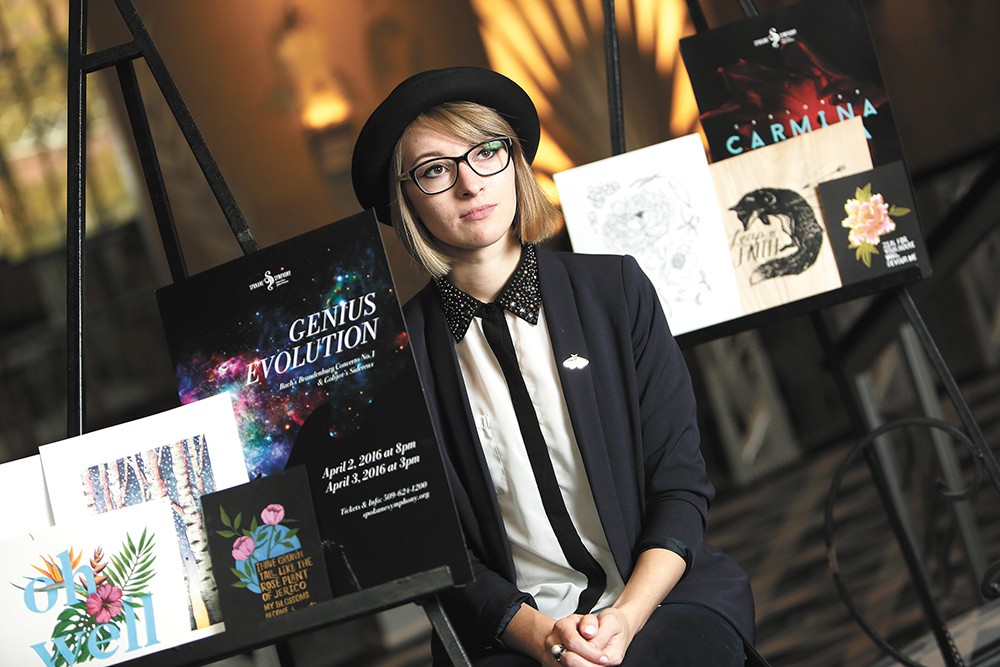 There are always words.

"I like to use words in my art a lot — it grounds the piece," says the 22-year-old Spokane artist, who shares her work on Instagram and Facebook under the handle @tenthousandmoths.

Sometimes, there is also gold. Sparkling and shining when the light hits just right, Gulova's second favorite artistic signature is to add these metallic embellishments; as the outlines of a flower, or gold scales on a slithering snake.

A recent graduate of Eastern Washington University's visual communication design program, Gulova works as the marketing coordinator for the Spokane Symphony by day, designing concert posters and other promotional materials for the orchestra. By night, Gulova draws and paints at the desk in her bedroom.

"The way I make most art now personally is, I just need to," she says. "Sometimes staring at a computer screen day in and day out gets to you a little bit, and I just have to paint and draw flowers. I like doing small works."

Most of her pieces are indeed small in size, like a gouache painting on black paper of a pink-and-gold peony, next to the words "Zeal for your house will devour me." She saw the phrase in a photograph taken at the Basilica of the National Shrine of the Immaculate Conception in Washington, D.C., the largest Roman Catholic church in the U.S.

"I discovered this whole cathedral, and they use a lot of gold in their art, which is what draws me. Catholic art is super cool, it's so rich with symbolism," Gulova says of her piece. "There are a lot of layers to it that I enjoy. It's like figuring out a puzzle." 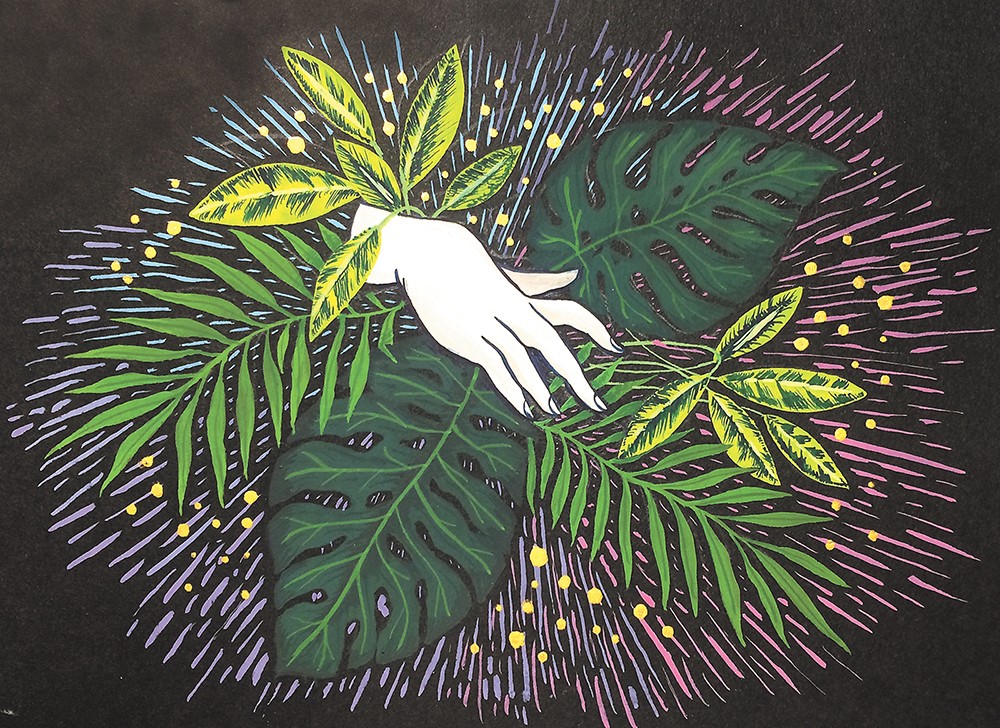 Marina Gulova's work is influenced by everything from religious iconography to tattoo art.

The young artist's creative influences vary widely beyond her love of gold leaf, floral shapes and implicit quotes. Her detailed pen-and-ink drawings in black and white evoke retro flash tattoo art. Fittingly, she's taken a handful of custom tattoo commissions, and has received requests — many from strangers who found her work online — to use a few pre-existing pieces as body ink. In addition to her professional work for the Symphony, Gulova has also created hand-lettered and -illustrated concert posters for local venues and musical groups. Earlier this year, she organized a group art show at the Fox Theater, for which she invited 15 local artists to each create a piece inspired by a famous composer, chosen from a list compiled by Spokane Symphony music director Eckart Preu.

Gulova's work has been displayed locally as part of several group shows, most recently for themed (one on teeth; the other on skin) exhibitions at Spaceman Coffee and The Observatory. For the next month, her "Tiny Arts" collection is displayed at Stella's Café.

On a more permanent basis, two of her designs are part of Spokane Arts and the city of Spokane's project to put local artists' work on the electrical control boxes for traffic signals around the downtown core. At Second Avenue and Howard Street, Gulova's hand-lettered design proclaims "know who you are" on one side, and "know who you are not" on the other. In a distinctly different style, her second submission (at Second and Monroe) was inspired by traditional Russian folk art and matryoshkas, or nesting dolls.

Gulova and her family emigrated from Eastern Europe to Spokane when she was 7 years old. Maintaining a strong connection to her Slavic heritage is deeply important, hence the matryoshka designs. She doesn't remember much from before arriving in the U.S., but says that throughout her childhood, she always loved to draw.

"I never saw myself doing anything [specific] as a kid. I thought I could be a doctor, or a marine biologist, but as I got older, I solidified that those weren't as realistic to me as being an artist," she says.

While studying at Eastern, Gulova recalls listing her top five dream jobs; companies she wanted to contribute her creative talents to if she could work anywhere.

While designing for NASA may still be in store for the goal-driven local artist, in the meantime she's volunteering with the UN, creating reports and other materials for the organization.

Reflecting on all she's accomplished so far, Gulova is grateful to be contributing to the region's growing arts community. For now, she's content to let her creative path take her where it may.

"I'm not really planning anything, for once," she says. "Now I'm in a phase where I want to help the people who helped me the past five years, so it's what can I do to open up opportunities; how can I connect people with the things they would be interested in. I've gotten so much from people in this town — professors and other artists — that I want to do the same thing for others." ♦