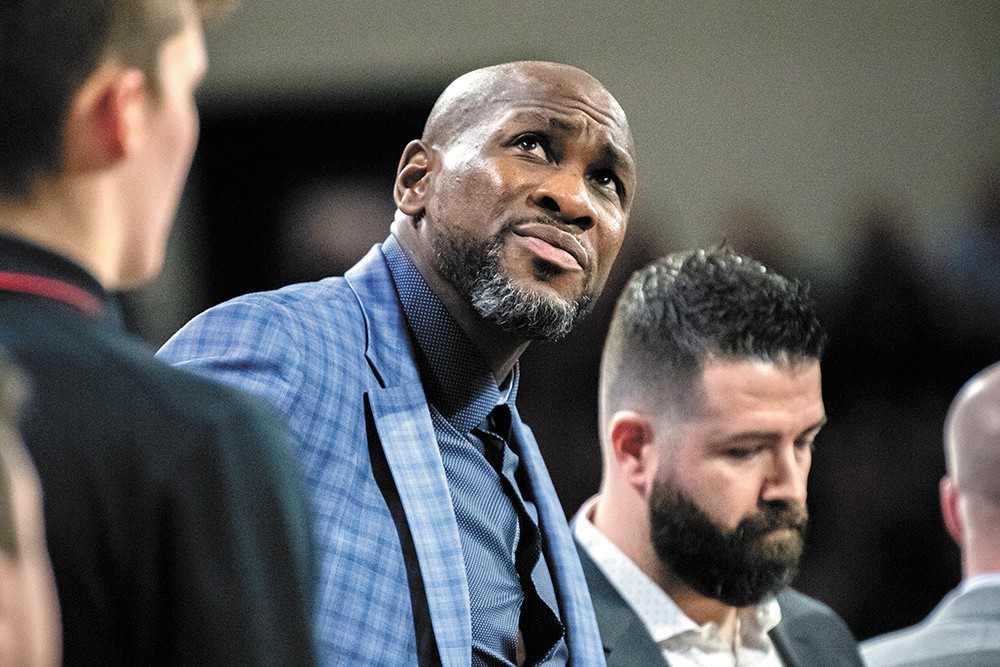 Erick Doxey photo
Roger Powell's own experiences as a college player serves him now as a coach.

Roger Powell is a fresh face on the bench for the Zags this season. At 37, he's the youngest, and newest, member of the coaching staff, but don't let that make you think he's lacking experience.

"He's like an extended player I guess you could say," says senior point guard Ryan Woolridge.

That's because he used to be an actual player, and Zag fans of a certain age might even remember him as such, though the memory is likely not the fondest. Powell's first collegiate game came on Nov. 16, 2001, when his Illinois Fighting Illini hosted none other than the Gonzaga Bulldogs. Powell played just one minute in the contest, but his team won 76-58.

Three years later he would once again cross paths with his future employer. As a senior, Powell scored 11 points on 5-for-5 shooting to help his No. 5-ranked Illini defeat No. 24 Gonzaga 89-72. Powell was a starting forward and all-Big Ten performer for Illinois that season, a season which would go down as arguably the best in that program's history.

Illinois opened the year with 29 straight wins. Their first loss came in the regular-season finale. They would lose just one other game that year, in the 2005 title game against North Carolina. If that sounds familiar, it's because Gonzaga did the exact same thing in 2017 — 29-0 to start, their only losses coming in the regular-season finale and in the NCAA championship against North Carolina.

Powell's basketball journey after college took him around the NBA and the world. Powell spent a preseason with the Seattle SuperSonics before finding a home with the Utah Jazz for the 2006-07 season.

After his playing days ended, Powell jumped into coaching. He spent five seasons at Valparaiso University under then-head coach Bryce Drew and ultimately followed Drew to Vanderbilt in 2016. Five years at a mid-major job, then three at a high-major, Powell now finds himself at one of the top jobs in the sport.

So, what does Powell bring to the team, besides all of his experience?

Every player used the word "energy," or a synonym, to describe their newest coach.

"He's got experience playing," senior forward Killian Tillie says. "I think he brings a lot of energy to the staff. It's great for us to have a new face who has a lot of energy and is willing to give it."

Powell's positivity is infectious and his experience as a player has helped the current roster connect with him. But that's not to say he's soft on them.

"He's just out there pushing us while being loud and wanting us to get better," sophomore forward Filip Petrusev says. "He's very intense. We feed off his intensity when practice has sometimes a little less energy and we're not as excited. He really gets us going."

If Tommy Lloyd is known as the international recruiting specialist and Brian Michaelson is his counterpart on the domestic stage, perhaps Powell will become known as the energy guy on the staff. It'd be fair, but far from the only hat he wears.

"He also works with the bigs, because he's a big guy, showing us some tricks down low," Petrusev says.

Powell was a skilled rebounder during his career, especially on the offensive end. As a senior at Illinois, he pulled down 222 rebounds and tallied 531 for his career. That skill seems to have stuck around into his coaching days, too. The Zags finished the regular season among the top five nationally in total rebounds with 1,251.

It makes perfect sense, too. Rebounding does require some skill and some knowledge, but it's mostly effort and energy. You have to want to get the ball, and you have to be willing to bang into people to get it.

Powell was good at that as a player. It doesn't seem like his approach has tempered much over the years, either, according to the players he's now tasked with coaching. Asked what words he would use to describe his newest coach, Petrusev — Gonzaga's leading rebounder this season — did not hesitate.

"Toughness and intensity," Petrusev says, "for sure." ♦

The original print version of this article was headlined "Energy Guy"