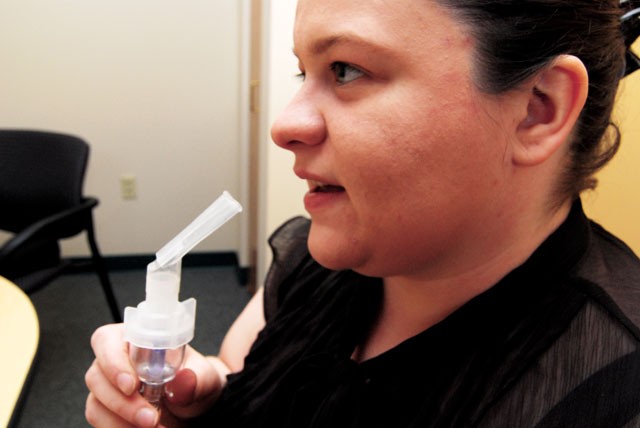 Tammy Marshall
Rachel Rooks keeps her nebulizer close at all times in case her asthma flares.

“It was the holiday season of 2005 and I had bronchitis,” Rooks recalls. “I’d had a cough that had gone on for three weeks. One night I was sitting in bed and I literally coughed nonstop for 30 minutes.”

Rooks’ husband rushed her to a hospital emergency room, where treatment eased her respiratory trouble. In the end, all turned out fine. But it wasn’t the first time Rooks has experienced breathing difficulties — and it won’t be the last. “I’ve always had bronchitis. When I was little I was constantly coughing, a deep, deep cough that made me sound like I was a seal.”

To this day Rooks carries her treatments with her — an electric nebulizer from which she inhales warm, medicinal vapors when she’s indoors, and a small inhaler for when she’s outdoors.

But sometimes even being prepared isn’t enough. Each day two people — out of the 40,000 people in the Inland Northwest who suffer from asthma — die from it, according to the Spokane chapter of the American Lung Association (ALA). One was Rooks’ mother Donna, who died during an asthma attack on May 22, 2006.

“Her attacks were much worse than mine,” Rachel Rooks says of her mother. On the night Donna Rooks died, she was sleeping downstairs. Donna’s husband and Rachel were sleeping upstairs. “She would keep the phone by the bed in case she needed help, but that night she couldn’t get to it,” says Rachel Rooks. “She had a bad attack and no one could hear her.”

Asthma can be passed from generation to generation, so it’s no surprise that Rooks inherited it from her mother, even though her two sisters don’t have it. “Scarier still is that many people who are at risk don’t realize they have asthma, chalking their symptoms up to a chronic cough or allergies,” says Laura Martin from the Spokane ALA office. “Studies show that these are the people who are more likely to die from an asthma attack.”

It’s natural that severe breathing difficulties bring stress to asthmatics, but now many with asthma have a new kind of stress: At the end of the year, the federal government will outlaw inhalers that use chlorofluorocarbons (CFCs). The CFCs have been shown to harm the ozone layer. Most doctors are moving away from the CFC inhalers and prescribing inhalers that use hydrofluoroalkane (HFA) as their propellants. The medicine used in the inhalers (albuterol) is the same; the difference is in the propellant used to shoot that medicine into distressed lungs. “The new inhalers use a softer puff. The spray is warmer and finer than the old propellant,” says Bridget Raleigh, an advanced registered nurse practitioner who works for Spokane pulmonologist Dr. Michael McCarthy. “The smaller particles get into the smaller airways.”

Some asthmatics are not convinced. They say they don’t get the same relief with the new inhalers or that they have to use more medicine. Others, especially those with no insurance, complain the cost for the new inhalers is much higher and they wonder how they’ll be able to afford their medicine when their old CFC inhalers are no longer available.

Cindy Thompson, director of the Spokane chapter of the American Lung Association, acknowledges the concerns. “The new inhalers work efficiently, but they need better patient education.”

“The problem [with the new inhalers] is that crystals form on the particles and gum up the canisters. You need to periodically clean them and rinse them,” says Raleigh. “Once patients understand that, they tend to be satisfied with the new inhalers.” When the inhalers are used properly, she says, patients should use less medication.

As for the cost issue, “Yes, the HFA inhalers are costly, but many pharmaceutical companies have indigent drug programs” that help uninsured and poor patients get the drugs they need, says Thompson.

“Consumers need to mention [their financial situations] to their doctors,” says Raleigh. “We have sample closets [of pharmaceuticals] that can go to help people.

Could You Have Asthma?

If you answered yes to one or more of these questions, you may have asthma. Please consult your health care provider.