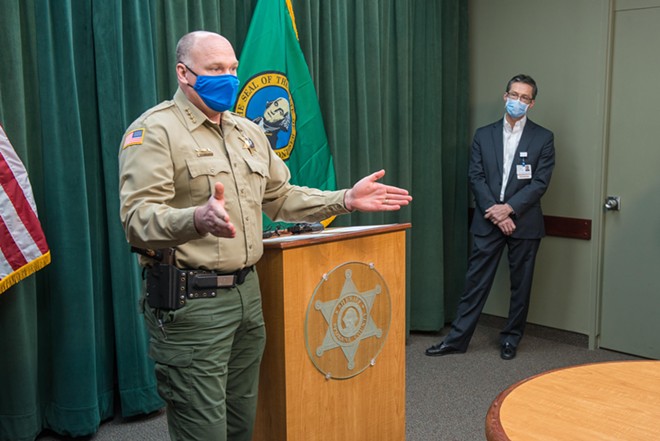 California is in a crisis.

In Los Angeles County, hospitals are so full of COVID-19 patients that ambulances are ordered not to transport victims of heart attacks who had little chance of survival to the hospital.

In part, the crisis had likely been exacerbated by the introduction of a new COVID strain first identified in the United Kingdom, one that spreads 40 to 70 percent more easily than the older strain.


Spokane County has already been preparing for the worst. Last week, according to Spokane Sheriff Ozzie Knezovich, director of Spokane County Emergency Management, officials were going to be conducting a tabletop exercise to simulate what that kind of crisis would look like in Spokane.


"We all saw that potential coming," Knezovich says. "The hospitals took great efforts to pull everyone together. We started watching what was going on around the rest of the United States. We saw what was transpiring in California. And our goal is to not allow our community to suffer that same fate."

At a press conference inside the sheriff's conference room in the Public Safety Building Jan. 5, Knezovich joined local health leaders to call for a surge of new Medical Reserve Corps volunteers to reinforce Spokane's health care system against the strain of a COVID spike in the weeks ahead.

The Inlander's questions centered on two topics: How might those volunteers be used? And, considering the pandemic, was holding an indoor press conference in a small room safe?

THE CALL FOR VOLUNTEERS


And this, Knezovich and other health care leaders stressed, was such a crisis.


"Is there any guarantee that we won't see what they're seeing in Southern California right now in some of the Providence hospitals?" Knezovich says. "No, there isn't."

He says they wanted to do everything they could to ensure the community was prepared for the worst-case scenario.

"We all have life skills we develop over time. At one time, I was a United States combat medic," Knezovich said. "I know there are combat medics in this community. It's a really great time to step back and help the community and serve one last time."


The reserve corps will also not be assigned to work with COVID patients, but instead to take over other tasks — like monitoring vital signs or transporting non-COVID patients — to help alleviate exhausted health care employees.

"Our staff... are tired," said Daniel Getz, chief medical officer at Providence Sacred Heart.
"[After] over nine or 10 months providing care, we want to make sure that if the need arises we have a backup plan."


Most of the volunteers the Reserve Corps is looking for include those with some kind of medical background, such as nurses, veterinarians, mental health workers, and paramedics. But they're also looking for chaplains, members of law enforcement, and anyone else who feels like helping. The Medical Reserve Corps is flexible, the officials at the conference stressed, and able to take advantage of a wide array of experiences.

"We all have skills that could be helpful," said Dr. Francisco Velazquez, the Spokane Regional Health District's interim health officer. "It could be transportation. It could be logistics. People who have backgrounds in education, for example, could spend time with a child who needs to be read a story. There's a lot of things we can do as a community that don't require a medical background."

In Tucson, some Medical Reserve Corps of Southern Arizona volunteers have already been tasked to man drive-thru vaccine centers. And in numerous other states, including New Jersey, Utah, Pennsylvania, New Hampshire and Ohio, there are plans to do the same.

In Spokane, the volunteers may potentially be tasked to aid with COVID vaccinations in the future, but for now, Velazquez said, the focus is on easing the burdens of other areas of the health care system.

You can apply to be a volunteer here.


WAS THE PRESS CONFERENCE SAFE?


Everyone during the press conference was wearing masks, but with about 20 people in a small closed room, most of them, including reporters and communications staffers, were clustered against the edges behind a conference table and the video cameras during the 21-minute conference.


With such a limited space, few of the attendees were able to observe the 6-foot social distancing rule that they've spent months promoting.

And with the possibility of a new more contagious strain of COVID spreading, the Inlander asked, how safe was the press conference?


Multiple speakers at the meeting had health care backgrounds, including Velazquez and the chief medical officers of both Providence Sacred Heart and MultiCare Deaconess Hospital.

But it was Knezovich who answered.

"Good question," he said, "The reality is, is in order to communicate with the public, sometimes, you have to reach out, you have press conferences."


Knezovich stressed the importance of self-sacrifice.

"I want you to think about it this way: We're also asking you to step up in our community and help out in hospitals and everything else. Can we protect and guarantee safety across the board?" he said. "No. We can't. But when it's this important we're going to step up and show you the importance of stepping up and asking for this volunteer effort. I can't tell you how safe you are. But you're here."

Yet most of the press conferences the Inlander has covered since the coronavirus hit Spokane haven't been in-person. They've been held over Zoom and WebEx and Microsoft Teams.


Kelli Hawkins, spokeswoman for the Spokane Regional Health District, says that she did raise concerns about the safety of last Tuesday's press conference, as the health district often does with proposed events.

But she indicates that Knezovich felt it was better to hold a more traditional press conference.


"He felt that it was a very important message to be delivered in person," Hawkins says. "That’s his communication style. I respect that."

"We're balancing the need to be in-person with the risks," Hawkins says. "It’s the same with schools. Do the benefits outweigh the risks?"

But Zoom wasn't the only option, of course. A year ago, Mayor Nadine Woodward held a short January press conference outdoors to talk about snowplow strategies.

Why not an outdoor press conference, which would be much safer than holding it indoors?

"It was brought up, but we weren't sure about the weather," Hawkins says. "It turned out it probably would have been feasible."


On the same day as the Medical Reserve Corps press conference, Gov. Jay Inslee announced a new framework of restrictions statewide. Most outdoor social or entertainment events would be capped at a max of 10 people from outside of your household. While outdoor funerals and weddings would allow up to 30 individuals, indoor funerals were completely prohibited.

The Washington state Department of Health did not immediately respond to a question about whether indoor press conferences would be allowed under the new regulations.

It's not the only in-person indoors press conference the sheriff has held in the last few months. In September, Knezovich delivered a presentation on the arrest of Jeremy Logan, the co-chair of the Spokane chapter of the Democratic Socialists of America.

"Why is it you had no problem attending the last press conference I had, but this time you have a problem?"  Knezovich wrote in a follow-up text message to the Inlander last week. "COVID was here then."

While the spread of COVID in the community was much lower in September, Knezovich wasn't wearing a mask at the Logan press conference.

Either way, Hawkins says the message, at least, from last week's conference was successfully spread.

"At this time, about 60 people have responded and submitted applications to volunteer," Hawkins says.