SAN ANTONIO — Authorities here discovered eight bodies in a tractor-trailer in a Walmart parking lot early Sunday in what they said was a human trafficking crime that underscored the perils facing migrants trying to enter the United States by any means available. 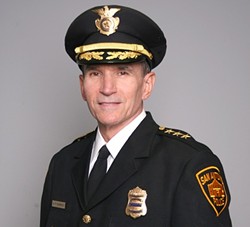 The San Antonio police chief, William McManus, said at a predawn news conference that a store employee making the rounds late Saturday was approached by someone from the truck “asking for water.”
By Sunday afternoon, another person had died at a hospital, according to a spokesman for Immigration and Customs Enforcement.

The initial eight fatalities were believed to have been caused by heat exposure and asphyxiation, a spokesman for the San Antonio Police Department said. Federal officials said in a statement Saturday that 39 people were in the trailer. The fire chief, Charles Hood, said at a news conference that 30 were taken to hospitals, about 20 of whom were in “extremely severe” or critical condition.

Mayor Ron Nirenberg of San Antonio in a statement called the episode “tragic,” adding that it “shines a bright light on the plight of immigrants looking for a better life and victims of human trafficking.”

Smuggling migrants in the backs of trucks is a common form of human smuggling in the region that has claimed lives in the past.

An expert on border enforcement and migrant deaths called the trucks “mobile ovens.”

“Those things are made out of steel and metal,” the expert, Néstor P. Rodríguez, a sociology professor at the University of Texas at Austin, said Sunday. “Yesterday in Austin, it was like 96 degrees at 9:30 in the evening. Even if the cooling system is on in the tractor-trailer, it’s just too hot.”

The San Antonio police chief, William McManus, said at a news conference that a store employee making the rounds late Saturday was approached by someone from the truck “asking for water.” The employee returned with the water and called , who found the bodies at the back of the truck.

Two of those found were “school-age children,” and the others were in their 20s and 30s, the chief said.

The driver, who was not immediately identified, was in custody and will be charged, the top federal prosecutor in the San Antonio area said in a statement Sunday.