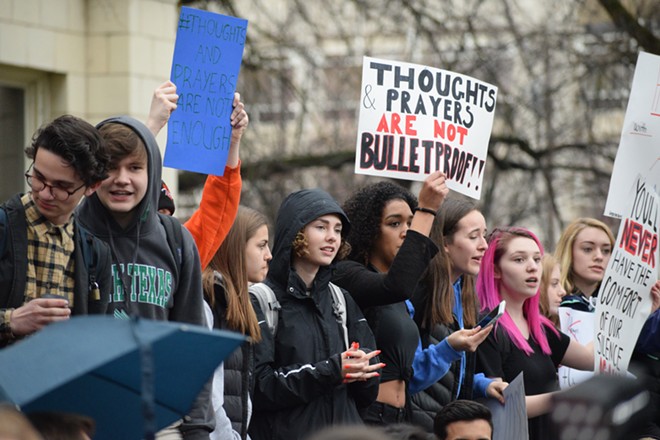 At least eight people were killed, and others were injured, in a shooting Friday morning at a high school in Santa Fe, Texas, according to law enforcement officials. A suspect was in custody.

The injured included at least one police officer, whose condition is unknown, Ed Gonzalez, the Harris County sheriff, said. In addition to the suspect in custody, a person of interest has been detained, he said. Both are believed to be students, as were the majority of the dead.

The gunman opened fire inside Santa Fe High School about 7:45 a.m., around the time school was about to start for the day, according to Joe Giusti, a Galveston County commissioner. He said the injured officer worked for the Santa Fe school district as a school resource officer. The gunman was uninjured, he said.

Officials with the University of Texas Medical Branch at Galveston told reporters late Friday morning that they had received at least three patients: One adult was being operated on, another adult was being evaluated in the emergency room and one minor had been admitted to the hospital.

The Santa Fe Independent School District said that law enforcement agencies were securing the building and that students were being transported to the nearby Alamo Gym, where parents could meet them.

Several hours after the shooting in Santa Fe, a rural town between Houston and Galveston, police cars blocked the road off the state highway where the town’s only high school is located.

Earlier in the morning, Billie Scheumack, 68, was in her backyard when she heard what sounded to her like a couple firecrackers.

“I thought the kids were playing,” Scheumack said. “But then I heard ambulances and fire trucks. It didn’t sound right, so I went out front.”

There she saw students from the high school running down her street, about a block from the school. A neighbor told her that children had been shot.

“In this little town, you wouldn’t think something like this could happen,” Scheumack said.

President Donald Trump commented on the shooting in a tweet Friday. “Early reports not looking good,” he said. “God bless all!”