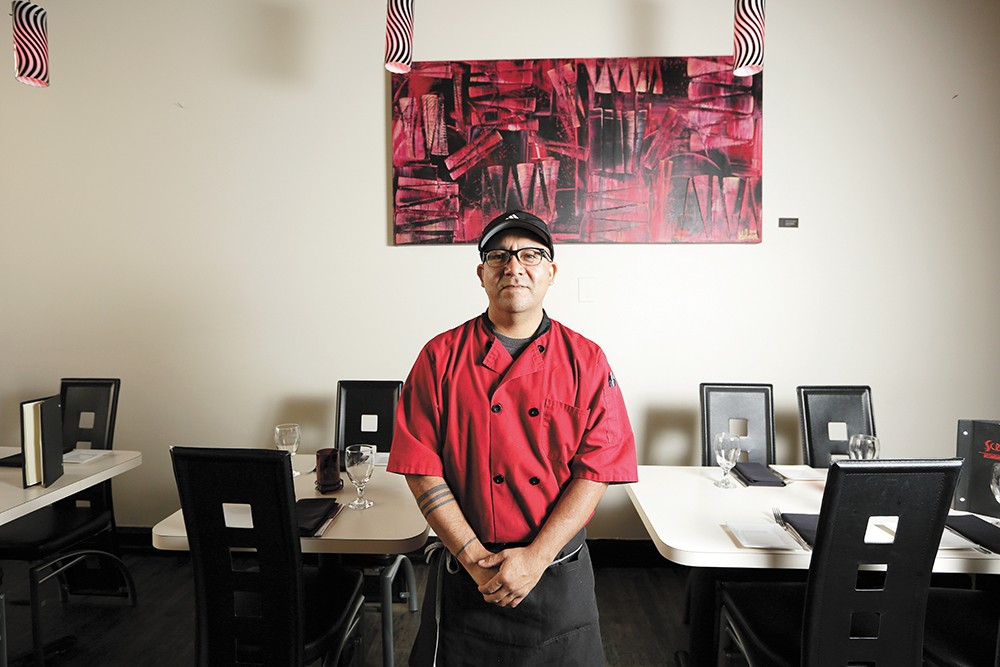 Running gives him a way to process all the creative ideas he has, while krav maga, a European form of martial arts, helps him focus, says chef Silviano "Sil" Hernandez.

Both are essential to what he does at Spokane's Scratch restaurant, especially since he is now in charge of all things culinary at the popular downtown eatery.

Earlier this year, Hernandez, as well as longtime Scratch employee Mari Bork and her husband, Brad Bork, took over Scratch from former owner, Connie Naccarato, who started it in 2007.

"It's a true partnership," says Bork, who has worked with Hernandez for around 12 years. "He's creative, fun to work with," she says, and he's humble. "It feels like a family," says Bork.

Hernandez came to Scratch after eight years working for Naccarato when she ran Mamma Mia restaurant with her parents in North Spokane. The family style restaurant appealed to Hernandez, who got his start cooking in family style restaurants — mostly Italian — while living in Chicago. Although he was studying to become a physical therapist, he discovered that cooking was his true passion and trained the old-fashioned way: on the job.

One thing he learned quickly: Family recipes are sacred and not to be tinkered with. That, he says, doesn't apply at Scratch, which regularly does special dishes and does a seasonal menu change twice yearly, giving Hernandez ample opportunity to flex his wings.

Another lesson learned: Take one significant ingredient and use it multiple ways. A whole duck, for example, can be broken down in-house for entrees, using smaller pieces for their popular lettuce wraps, while the rest is used for a nutritious and flavorful broth.

Although Hernandez likes to smoke the duck for an extra level of flavor when serving it at Scratch, the recipe he shares involves a simple sauté, which helps maintain the meat's inherent tenderness.

Lettuce wraps, he says, are versatile, fast and easy, something he has served his kids. "It's just like eating a taco," says Hernandez, who originally hails from Oaxaca, Mexico.

Hernandez intends to slowly incorporate more Oaxacan dishes, such as one his mother made involving zucchini flowers and epazote, a pungent herb often used in parts of both Mexico and Central America. Although he struck out finding a reliable source for the flowers — pulling the buds diminishes the plant yield — his description of the dish intrigued one Green Bluff grower who asked for the recipe.

Also on his list are peppers, which offer flavors ranging from sweet to hot to smoky, as well as salsas, pork and moles, which he describes as a staple of Oaxacan cooking.

Hernandez credits his mother with his love of cooking, something he's able to do for her when he visits her in Mexico. She's visited Spokane once since he's lived here, says Hernandez, who made her a simple spaghetti and meatballs dish at her request, with one small alteration: red pepper flakes.

"You know us Mexicans," he says, "we like heat.

"The more I know, the more interesting it gets," says Hernandez.

Young Kwak photo
TRY IT YOURSELF


Lettuce wraps are a fast, healthful dish that can be adapted for almost any dietary need or taste profile. Switch up the vegetables or swap out the duck for another animal protein, and use any lettuce-like greens you prefer. Here, the Five Spice powder, an Asian spice blend typically including fennel, cinnamon, pepper, star anise and cloves, adds a hint of smoky sweetness.