Far-right Trump supporters in Spokane were faced with a contradiction on Wednesday.

Here they were in Spokane, marching down rainy sidewalks for a pro-Trump "Stop the Steal" protest with pro-cop "Thin Blue Line" flags and chanting the pro-cop slogan "Back the Blues."

Meanwhile, over in Washington, D.C., Trump supporters had been the ones clashing with riot cops. They'd been the ones who mobbed the Capitol, broke windows, took down an American flag and replaced it with a Trump one. It wasn't antifa or Black Lives Matter protesters. It was them.

But in Spokane, as crowds of Trump supporters gathered with their "Don't Tread on Me" flags, some carrying firearms and wearing militia-aligned "III percenter" regalia, former state Rep. Matt Shea came bearing a different narrative, a baseless conspiracy that the patriots were being framed.

"It's coming out now that it was antifa that raided the Capitol inside today, trying to make it look like patriots!" Shea shouted through a megaphone.

"Because patriots always 'Back the Blue.' You don't see any riots and looting around here. You just see communists who want to take over our country. And that's not going to happen!"


Shea's not the only one trying to falsely blame antifa.


As for Trump, he almost appeared to be celebrating violence and chaos, claiming it was a natural consequence to the voter fraud he's continued to falsely allege.

“These are the things and events that happen when a sacred landslide election victory is so unceremoniously & viciously stripped away from great patriots who have been badly & unfairly treated for so long,” Trump tweeted, before Twitter suspended his account. “Go home with love & in peace. Remember this day forever!"

Shea, for his part, has a history of clashing with law enforcement. He declined to run for re-election last year after having been accused of supporting “domestic terrorism” for his role supporting the armed occupation of Oregon’s Malheur National Wildlife Refuge in 2016.


Shea is now the pastor at a passionately Pro-Trump Covenant Church, where he's continued to rally followers and spread conspiracy theories.

The day before Spokane's rally, he stood on a truck bed in the parking lot in front of U.S. Sen. Jim Risch’s Coeur d’Alene office and called upon his compatriots to fight.

“We’re fighting and we’re going to continue to fight. We’re heading into a war,” Shea proclaimed on Tuesday. “This was not an election! This was an attack on our country! That’s what this was.”

Shea described the election as “a military operation against this county,” and prayed for God to turn Vice President Mike Pence’s heart “away from any spirit of compromise” and help “save the republic.”


To not object to the Electoral College vote affirming Joe Biden's election as president, Shea argued, effectively meant you were OK with an attack by China on our country.

"If you do not stand for the republic, you will be voted out of office and you will be primaried, and you will have nobody backing you from this point forward!" Shea said. "Amen?!"


Shea assured them that Jan. 6 would be "one of the most momentous days in the history of our country in modern times."


"If the thing goes ill tomorrow, we will fly our flags upside-down, because we have exhausted every other remedy except the final remedy — and that is, we the people rising up," Shea said. "And we will rise up against tyranny because Americans always fight for liberty!"

At Wednesday's rally in Spokane, there weren't very many upside-down flags. But there appeared to be as many Trump flags as American ones.

A man in a Make America Great Again hat held a "Jay Inslee for Prison" sign, a photoshopped picture of Gov. Inslee's head sticking out between jail bars. A Ford truck dragged a trailer with a poster board attached to it that said "The 'I Love Trump Sign'" above a raised middle finger.

A protester who said his name was Lance Clemmings was, curiously, dressed as a viking with a long red beard. He said he just joined the protest on a whim after seeing it while getting coffee.

"Oh my God, Spokane isn't just full of cucks and pussies," he says, using an insult popular for the alt-right to attack moderate conservatives. "Thank goodness!"


The crowd recited the pledge of allegiance and sang patriotic songs. They rolled through a rotating group of chants, including "1776!" "Protect the Constitution" and "Freedom is the Cure!"


Three counterprotesters stood across the street, holding signs with slogans like "Stop the Squeal" and "Dump Trump" (above a picture of Trump's head in the toilet). Occasionally, they heckled and taunted the pro-Trump group.

And so after Shea asked former Spokane Valley City Councilman Caleb Collier to lead the crowd in a call-and-response oath to "support and defend the Constitution of the United States against all enemies, foreign and domestic," Collier turned to the counterprotesters and yelled "domestic" — emphasizing who he sees as the enemy.


"You are all now under oath to defend this republic against people like that," he said, motioning toward the counterprotesters once more. "Against the communists, the atheists, the globalists, we will not stand by and allow them to take our country."


"There are only two options anymore," Collier, a member of the far-right John Birch Society, said. "You are either a patriot or you are a traitor."

And the crowd shouts "patriot!"


"The time for debate is over," Collier said.

SCENES FROM TODAY'S RALLY IN SPOKANE: 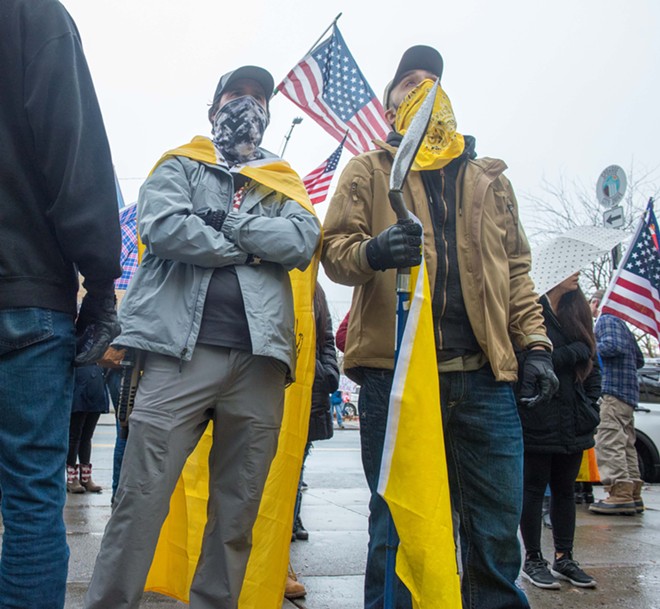