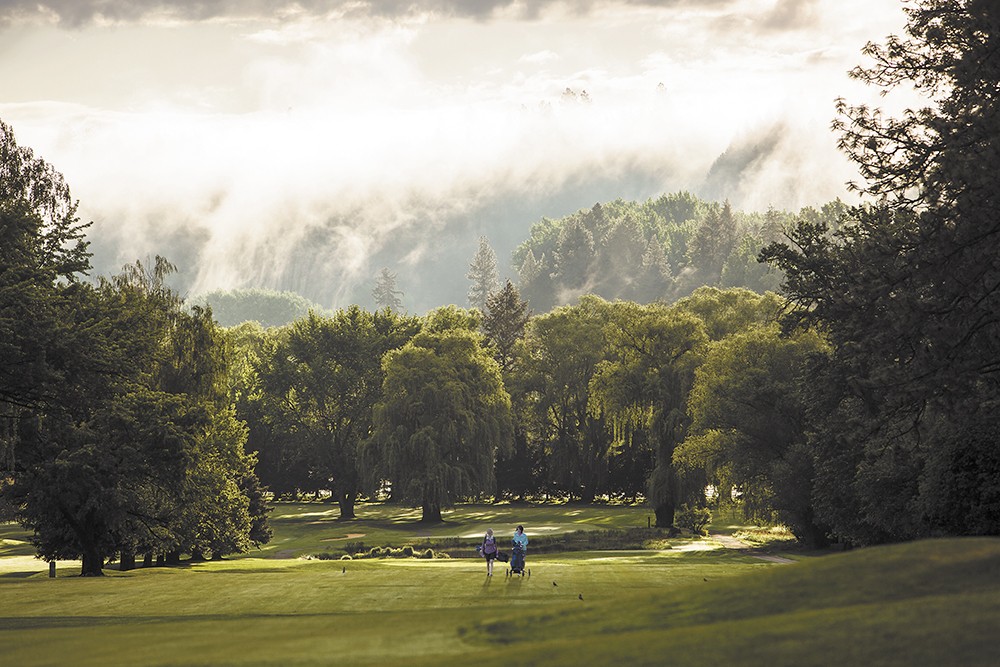 An early morning round at Kalispel Golf and Country Club.

"The floating green is definitely what has put us on the map internationally," says Andy Mackimmie, the resort's head golf professional. "It's so unique, a floating and movable green, the only one in the world. Not everybody's heard of Coeur d'Alene, but if you mention the floating green, they'll say, 'Oh, I've heard of that!'"

Golfers who swing by will find several new things to make the "total golf experience" even better.

Every green has been resodded, with "the best grass turf you can have in the Northwest," Mackimmie says. And while players still enjoy the services of a caddy, he says, "we've also added touch-screen GPS screens to all of our golf carts," which players can use for determining yardages or ordering snacks. And for the first time, carts are allowed to leave designated cart paths so golfers can head straight for their ball in the middle of the fairway.

At the former Spokane Country Club, changes are afoot, inspired by the Kalispel Tribe's purchase of the course and renaming it KALISPEL GOLF AND COUNTRY CLUB (2010 W. Waikiki Rd.).

The course originally opened in 1910, but 2016 marks the first year that the public can play without being members. Membership still has its privileges, of course, from preferential tee times to use of the club's training facilities, including new indoor golf simulators, but locals and visitors staying at Northern Quest Resort & Casino can also book a round at the course nestled along the Little Spokane River.

Gary Lindeblad, the course's head pro, praises its old-school look and "one of the best-designed sets of bunkers of any course I've ever played."

While people playing for the first time will be "dazzled" by the scenery and wildlife — not to mention the new 1898 Public House restaurant — even longtime players will notice significant changes to the care of the place.

"They've just about tripled the size of the maintenance crew," Lindeblad says. "There's going to be an incredible 'Wow' factor in just how perfect condition the course is in."

INDIAN CANYON GOLF COURSE (1000 S. Assembly Rd.) has spent the last couple of years bringing what has long been considered a gem of a public course back to vibrant life, and the results are starting to show.

Maintenance crews worked hard, and the city's urban forestry department removed some trees and vegetation that were hurting the turf. Head pro Doug Phares says the results are better air circulation and more sun around the greens. The course also has a new fleet of golf carts for 2016, and they all have USB ports so you can charge your phone or electronic yardage devices. "People play music and you can keep your speakers going," says Phares.

More obvious are changes are in the clubhouse, where new carpet and paint greet visitors, new equipment in the kitchen means new culinary options, and an expanded liquor license means that duffers can enjoy a cocktail on the newly refurbished deck. "It's a really spectacular setting," Phares says. "They put in a new railing system where you can see everything now. It's really made the view even more spectacular."