Babe Ruth — Major League Baseball's legendary record-setter for home runs, RBIs and slugging percentage among others — was reputed to enjoy a quart of bourbon and ginger ale for breakfast. That was accompanied by a porterhouse steak and a half-dozen fried eggs. In 1925, when he was just 30, he was hospitalized during spring training for binging on at least a dozen hot dogs in a single sitting.

Finding a nutritionist today who would recommend Ruth's diet is going to be tough. Even at the time, hot dogs and alcohol weren't exactly synonymous with healthy, high-performance eating. But how we approach athletic diets continues to evolve as new findings come to light.

For example, pregame prep is only part of the dietary equation. As nutritionist Michele Clarke-Mason points out, optimal post-game recovery, particularly in collision sports, now plays an increasingly important role in athletic diets.

"Especially in the past, you talk about athletic nutrition, and everyone went straight to the macronutrients. How many carbs should I have? How much protein should I have? Do I avoid fat? For me, recovery is about the micronutrients — your antioxidants, your minerals, your vitamins," she says.

"And I throw probiotics in with those micronutrients. They are vital for good digestion and immune health. If you have a really healthy population of gut bacteria, you will be getting a low-level amount of some of the B vitamins on a regular basis. You break down your foods better. They feed and are sort of the housekeepers of the lining of your digestive tract."

Clarke-Mason knows a thing or two about supporting safe, speedy recovery processes in collision sports. Between 2013 and 2019, she worked as a nutrition consultant for the Seahawks. More recently, she's started working with Seattle's pro rugby team, the Seawolves, and launched a specialized catering service for sports teams called Veracious True Foods.

The name of her company is a good indication of her wider nutritional philosophy for athletes. Avoid highly processed foods. Keep refined sugar intake to a minimum between games. And don't treat supplements like a substitute for good eating.

"Because all the advertising we see is on sports products and sports supplements, the general public envisions athletes with tables full of pills and powders and drinks. In my style of nutrition, that's the fine-tuning. That isn't the foundation or the basis at all," she says. "I'm wary of anything that says it will fix X. The body's far more complicated and things work in concert with each other." 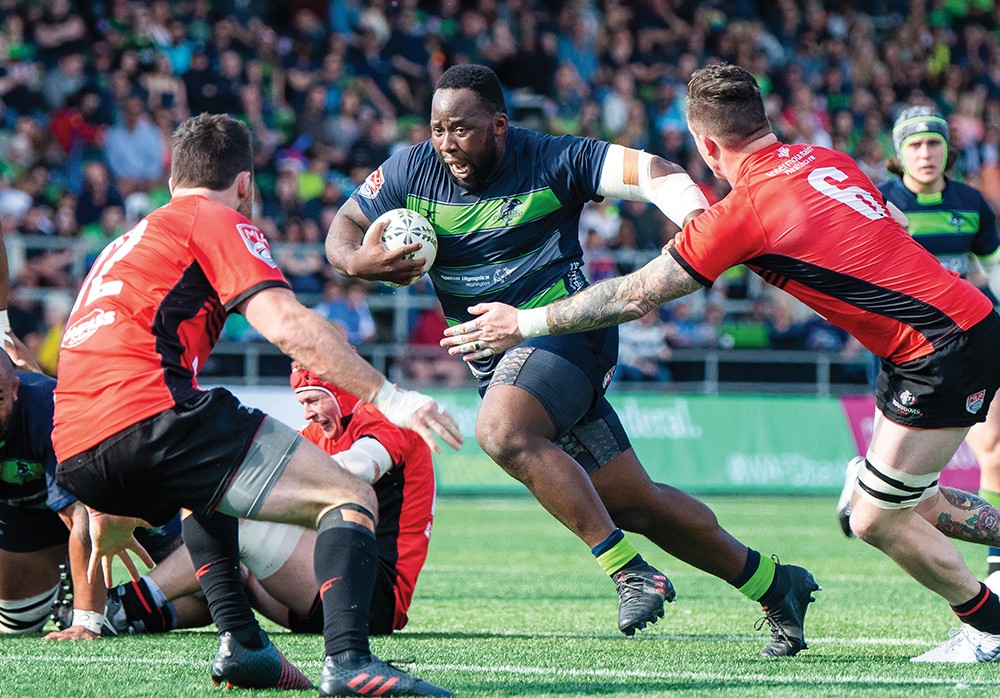 "We try to avoid all processed foods," she says. "One thing that the guys are taught to do when they go grocery shopping is to stay on the outside of the aisles. The aisles are where the processed food is. The outside is where the fresh fruit and vegetables are. It's being mindful of what you're putting in your body and how that's going to make you perform on the court."

Unsurprisingly, that rule of thumb doesn't deviate much from general dietary advice. That's why a pregame meal for the EWU basketball team is very similar to a hearty, balanced meal on anyone's table.

"When we're at home, if the game is a six o'clock, usually we'll eat around two. That always consists of whole-grain pasta with a red sauce. We don't do white sauce because it's too high in fat. And then there will be chicken and always salad with it as well. There's usually a fruit salad with cantaloupe, pineapple and grapes that they have on the side too," she says.

Meals before earlier weekend games are a lot like "breakfast foods," such as "eggs, potatoes, turkey bacon, sausage."

For athletes, much like everyone else, the potential pitfalls come when healthy options aren't readily available. That's when fast food and processed snacks — a burger combo meal or a gas-station burrito — become tempting. Clarke-Mason says that organization is the best defense against the lure of quick-and-easy convenience. She encourages players to travel with a bag of nuts or a high-quality protein bar for that reason.

For Haukeli and the EWU athletic staff, advance nutritional planning can be almost like military-style mobilization.

"Our director of ops will look at the restaurants around the area that we're staying in. More times than not, we end up getting food catered to our hotel, so when we have a pregame meal it looks just like it does here," she says.

"One other thing is that we actually travel with a Ninja blender. When we get to where we're going, the managers will go to the nearest grocery store and get a bunch of frozen fruit, bananas and coconut water. They'll make smoothies for the guys that they have in addition to whatever meal we're having."

And the Babe Ruth diet? The idea that athletes can eat whatever they want without compromising their performance is one of the most persistent misconceptions that both Haukeli and Clarke-Mason have to counter.

"I've been told this by young adult athletes — that they can eat whatever they want because they're so active. And that speaks back to recovery. I'm not anti-fat at all, but the fats used in processed foods tend to be fats that feed the inflammation process. So there is a cost. Just because you can compensate for the calories doesn't mean it's serving your body in its best capacity," Clarke-Mason says.

Even a legend can't argue with that. In the year that Ruth was hospitalized for his hot dog binge, the Sultan of Swing had his lowest-performing season with the Yankees.