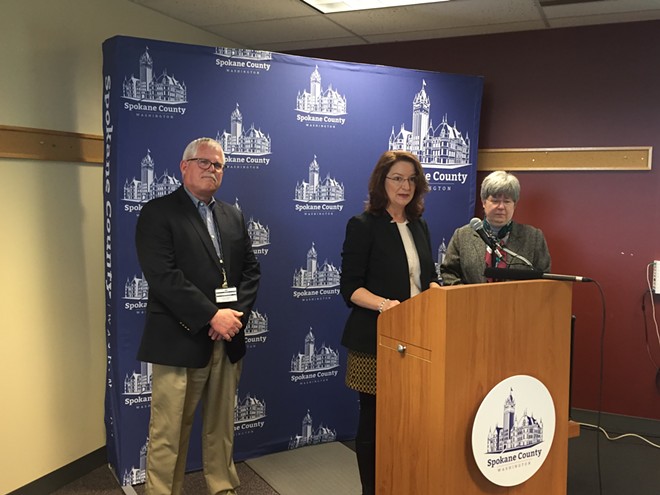 A former longtime Spokane County employee in the Risk Management Department allegedly stole over $1.38 million in public funds over the course of a decade, according to a new report from the Washington State Auditor.

"This is certainly a huge black mark and it frustrates the hell out of all of us," Steve Bartel, director of the Risk Management Department, told reporters at a March 28 press conference.

The suspect in the fraud scandal, a former property claims technician in the Risk Management Department who had worked for the county since 2001 — she was fired in May 2018 for unrelated reasons — allegedly created "fictitious" liability claims made payable to at least 45 people related to the employee, including her grandmother, brother, cousin and son's friends, as well as documents supporting the claims, such as fake settlement papers, per the auditor's report.

The theft reportedly began in 2007 and lasted through 2016, siphoning off between $73,000 and $212,000 annually. Two recipients of checks from the false claims interviewed by state investigators in early 2019 said that they kept $100 to $300 of each check and gave the rest to the technician, according to the report.

The employee even went as far as going into the office to approve claim payments on days that Bartel was not in the office to avoid detection, as well as doctoring financial reports to make sure that they were within the county's budget for liability claims, Bartel says.

"It's just mind-boggling to think about the degree [to which] she went and the steps that she took to cover her tracks," he said at the press conference.

The case is being investigated by the Spokane Police Department, after which charges will be forwarded to the county prosecutor. County staff did not release the name of the suspected employee.
Staff at the Spokane County Auditor's Office first became aware of the embezzlement last August, when they were reviewing county claims payments, and notified the state Auditor's Office.

The report also found that the county's own oversight policies and procedures were "not adequate to safeguard public resources," such as allowing the former employee to pick up checks directly from the county Auditor's Office (as opposed to mailing them) and allowing other employees to approve claim payments when director Bartel was not available. (The employee was also not authorized to work with the types of claims that she was filing, according to Bartel.)

At the March 28 press conference, Bartel acknowledged the shortcomings of his department's practices: "We've always had oversight. Obviously, it wasn't enough. It wasn't to the degree we needed to absolutely verify [that] everything was correct."

"You never expect an employee to go to that degree, especially in a government agency, to create this kind of theft," he added.

In response to the theft and the audit, Bartel says that his department has enacted stricter policies for approving claims, including making the director the primary approver of liability payment vouchers and conducting monthly reviews of the preceding month's payments.

Al French, a Spokane County Commissioner, tells the Inlander that he is confident in Bartel's leadership of the Risk Management Department. "I'm comfortable that our county staff are putting into place mechanisms to prevent this type of crime from happening again," he writes in a text.
Spokane County has filed a loss claim under its standing Crime/Employee Dishonesty insurance policy, which has been accepted by the company. Bartel says that he expects a "full repayment" of the $1.38 million, minus their small deductible.

The county will also be seeking restitution during the eventual prosecution, the audit states.

This post has been updated to include a statement from Al French, additional findings from the report, and to clarify the financial range of the annual theft.