Pizzas topped with eggs at the Flying Goat. Plus, new breakfast options in Sandpoint.

By Carey Jackson and Carrie Scozzaro 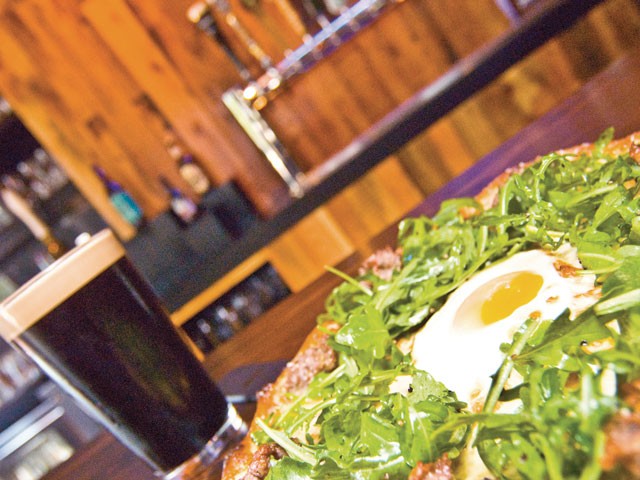 Tammy Marshall
The Kiernan at the Flying Goat: Italian sausage and arugula topped with an over-medium egg. The pub has nitro tap for beers like Rogue's Shakespeare Stout.

Right away, I know that the Flying Goat is someplace special. It’s not the woodsy scent of all the lumber in the tables and bar (reclaimed from a grain elevator in Ritzville) or the big gas firepit on the patio (trucked in from Awesomeville).

It’s a series of photographs on the walls of pub — all of which could have been lifted from my childhood memories. There’s the interior of Joe Albi Stadium; the old fireplace from Audubon Park; the suspension bridge across the river at Bowl and Pitcher… Located on Northwest Boulevard across from the Downriver Grill, the Flying Goat shares two of its three owners with Downriver — Hal Bixon and Jonathan Sweatt — and got its head chef, Darrin Gleason, and General Manager Beth McCray come from across the street, as well.

But the Flying Goat is no Downriver 2.0. “It’s going to be more of a neighborhood place,” says McCray. “The atmosphere we’re shooting for is ... an Ireland- or Scotland-type pub.”

The offerings will surely draw people from outside the neighborhood.

Gleason describes a menu of artisanal pizzas ($11- $15) topped with Zoe’s Meats — an environmentally friendly cured-meat company that supplies many pizza parlors in Seattle.

McCray talks booze. With no hard alcohol, the pub will focus on its beers, including an exclusive brew, the Horned Aviator — a hops-heavy pale ale from Northern Lights Brewery. (The Flying Goat also has a house red wine, “Goat Head Red,” from Townshend Cellars.)

The shelves behind the bar are lined with 20-ounce beer mugs and growlers — 64-ounce glass beer jugs — stamped with the pub’s logo. Join the pub’s mug club and get specials on beer. Growlers run $10-$12.50.

Watching over the whole place is a metal-and-neon goat’s head crafted by local artists Sean Smith and Ken Yuhasz. It’s a cheeky melding of the hunting trophies that adorn old world pubs and the ever-present neon beer signs lighting up the windows and walls of bars stateside.

Rumor is: that goat can drink you under the table. (Carey Jackson)

Although their restaurants have North Idaho-based names, Autumn and Viljo Basso’s establishments don’t seem like they’re from around here. First there was Syringa, named for the state flower, with its urban sushi menu and, more recently, the couple opened Garnet Cafe, named for Idaho’s official gem. Located adjacent to Syringa between Third and Fourth, Garnet provides a reasonably priced and innovative interpretation of the hearty Western breakfast.

Eggs are plentiful, accompanied by applewood-smoked bacon or sausage ($7), an eight-ounce New York steak topped with bleu cheese ($12), and even Spam ($6). Pork can be panko-breaded and fried ($8) or topped with maple-apple-pecan sauce ($10). Sockeye salmon and eggs includes an orange marmalade ($9), while pesto adds color to the Green Eggs and Ham ($8).

All egg dishes include “northwest” roasted Yukon golds with mushrooms, onions, garlic and choice of bread, which you’ll want to slather with house-made preserves or lemon curd. Substitute egg whites or simulated egg ($1.50), go with the omelets ingredients as a stir fry or swap any meat for tofu (no charge).

If your idea of breakfast includes dessert, try waffles ($4) or Bob’s Red Mill Oatmeal with blueberries, cream, raisins, French toast is stuffed with either fruit and whipped cream cheese or bananas and Nutella ($7).

Lighter fare includes Greek yogurt with granola, raisins and fruit ($4). Assorted sides like duck sausage ($3) may be paired with an egg ($1.50) or pancake ($2), for smaller appetites, including for the kidlets.

Carey Jackson is a former intern for The Inlander
More