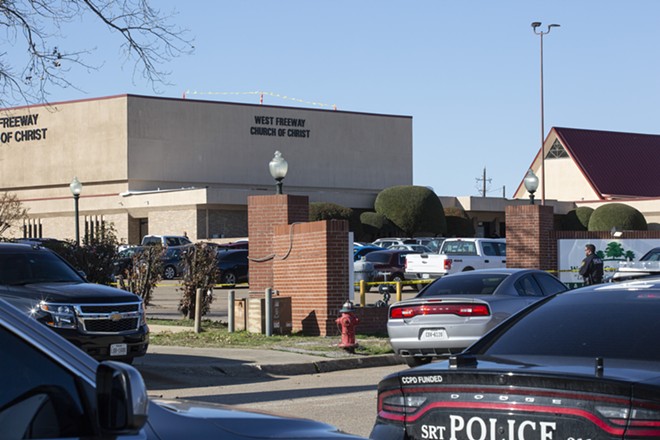 Laura Buckman/The New York Times
The West Freeway Church of Christ in White Settlement, Texas, Dec. 29, 2019. A gunman opened fire at the church on Sunday, killing one person and critically wounding another before a member of church security fatally shot him, the authorities and a witness said.
By Anemona Hartocollis
The New York Times Company

The gunman who opened fire at a Texas church on Sunday morning, killing two congregants before he was shot and killed by a member of the church’s volunteer security team, was a 43-year-old former drifter with an extensive criminal past, law enforcement authorities said on Monday.

The authorities identified the gunman as Keith Thomas Kinnunen and said he had used an address about six miles from the West Freeway Church of Christ in White Settlement, near Fort Worth, where the shooting took place.

According to court records, Kinnunen had a trail of criminal arrests across the country, including assault and disorderly conduct in Arizona and assault and battery in Oklahoma.

On Sunday, as a hushed congregation sat listening to the service with rapt attention, several leaning forward and with folded hands, Kinnunen stood up and fired a shotgun into the crowd.

Jack Wilson, the head of security at the church, shot and killed Kinnunen seconds later. Wilson later posted a message on Facebook saying that he had been put in a position he hoped no one would have to be in, “but evil exists and I had to take out an active shooter in church.”

Kinnunen had sat with the parishioners before opening fire, striking Anton Wallace, 64, and Richard White, 67, both of the Fort Worth area. Both died at a nearby hospital, according to the state’s public safety department.

Kinnunen had been arrested a number of times in the Fort Worth area for charges that included aggravated assault with a deadly weapon. Then in 2016, he was arrested in Linden, New Jersey, after police found him with a 12-gauge shotgun and rounds in the area of a Phillips 66 refinery, according to a news report in mycentraljersey.com.

Other offenses Kinnunen was charged with include speeding, theft, assault and disorderly conduct in Pima County, Arizona, between 2003 and 2014; petit larceny in Las Vegas in 2011; theft in San Luis Obispo County, California, in 2010; and felony charges of aggravated assault and battery in 2011 and arson in 2012 in Grady County, Oklahoma.