Most Rwandan doctors fled during the genocide, but Dr. Pam Silverstein is training a whole new generation 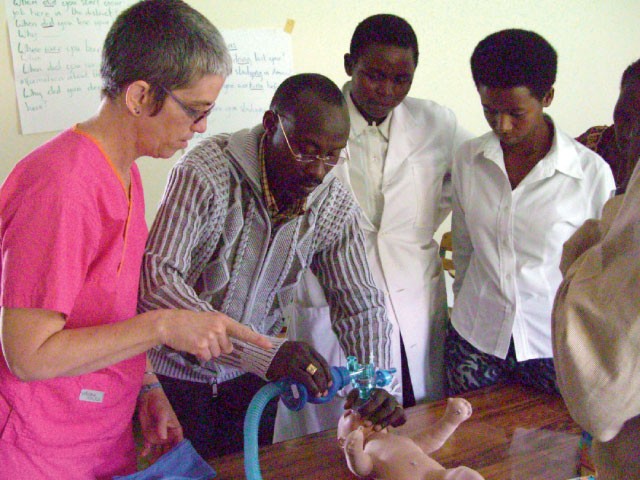 Not surprisingly, the artwork in the office of Pam Silverstein, an obstetrician and gynecologist at Deaconess Medical Center, has a lot to do with babies. Numerous sculptures and woodcarvings of infants and pregnant women — from all over the world — sit about her office.

When Silverstein goes to new city, she says, she often picks up another piece for her mother-baby collection.

In some parts of the world, the birth process is routine: a quick hospital stay, some pain, some tears, a newborn cry and, odds are, beaming smiles all around.

Not so in Rwanda. There, the odds aren’t nearly as good.

“In the first year of life, there’s a 10 percent infant mortality rate,” Silverstein says. “In the first five years of life, it’s 20 percent.” The number of women who die giving birth is just as disturbing. That’s in part because 80 percent of deliveries occur at home.

For an African country, Silverstein says, Rwanda used to have a pretty decent health care system. But genocide has a way of changing things. When mayhem and massacre dominated Rwanda in 1994, many doctors were killed. Most others fled the country. Rwanda still hasn’t recovered.

“There are 240 doctors in the country for 9 million people,” Silverstein says. That’s comparable to having only 11 doctors for all of Spokane County. In the rural areas of Rwanda, there are nurses, but many only have a high school education.

“When you’ve decided you’ve learned how to do a C-section [you do it],” Silverstein says. “There’s no standardization of training.”

With two trips to Rwanda since 2008, Silverstein is working to change all that, as part of a group called Medical Connections: Ujama. (The word “Ujama” is Swahili for “extended family.”)

With Ujama, Silverstein and others have taught 60 nurses and 30 doctors complicated vaginal obstetrics. They’ve also brought $65,000 worth of medical supplies.

“Part of our intent is always to try to bring supplies, teach, and provide clinical services,” Silverstein says. “The key is we’re developing a partnership and working with them to identify their issues and need.”

That’s short term. Long term, the vision is even grander. “Ultimately the idea would be to build a model clinic, and ultimately a hospital,” Silverstein says. “A 15-year plan — that’s their dream.”

For now, Ujama has established a mobile clinic that can drive from village to village, treating patients and teaching the village nurses. “We brought pelvic models,” Silverstein says. “We showed them how to do breech deliveries and neonatal resuscitation.”

The Rwandans have been grateful but not satisfied, Silverstein says. “They say, ‘When you come back next time, we want to tell you how many more babies you can save.’”

Sometimes Silverstein has had to improvise. To demonstrate to a room full of mostly women how to properly deal with head-first delivery complications, Silverstein had the one full-grown man in the room lie on the table, pretending to be the baby.

“They just loved it.” Silverstein says. “They were just laughing.”

Despite the country’s struggles, despite their bloody past, Silverstein says there’s a sense of excitement in Rwanda.

“They really want to move forward. The government has declared you don’t have ethnic divisions,” Silverstein says. The people she has been teaching are young, but mature in their thinking: Health Development Initiative, the non-governmental organization Silverstein worked with, was formed by a group of 20-year-olds.

As Silverstein met these people, as she began to form friendships, she began to see a different Rwanda from the one in the headlines.

“You connect with real people and then the place becomes real,” Silverstein says. “There are a lot of people who have this interest in other cultures. But when you get into the country and meet the people, it just changes. Reality is way beyond the theory.”