PITTSBURGH — The public rituals of grief in Pittsburgh kept accumulating on Wednesday with more funerals, more burials and more communal gatherings for the 11 killed in the attack on the Tree of Life synagogue. 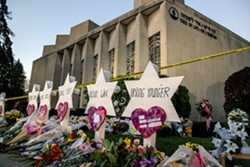 Hilary Swift/The New York Times
A makeshift memorial on Tuesday morning, Oct. 30, 2018, outside the Pittsburgh synagogue named Tree of Life, where 11 congregants were shot to death on Saturday morning. President Donald Trump is to visit Pittsburgh on Tuesday.
At Beth Shalom Synagogue, people gathered early Wednesday to mourn Joyce Fienberg, 75, a well-loved researcher at the University of Pittsburgh. A little over an hour later, visitation had begun for Irving Younger, 69, at Rodef Shalom Temple, the second service there in two days.

Emily Harris, 69, was in Younger’s graduating class in high school when they were growing up in the Squirrel Hill neighborhood. “He was a good guy, a solid guy: what we call a mensch,” she said. “He was a friend you could always count on.”

Most of the mourners tried to keep the focus on the people being remembered, but sometimes the horrific circumstances behind it all crept into mind.

“You see all that’s going on in the world,” Harris said, “and every time I’m out in a crowd, I get visions of something like this happening.”

Sarah Silbiger/The New York Times
President Donald Trump speaks about the mass shooting at a synagogue in Pittsburgh, at the 91st Annual Future Farmers of America Convention in Indianapolis, Oct. 27, 2018. Sanders said President Donald Trump would make a trip to Pittsburgh on Tuesday along with his wife, Melania Trump, to express the support of the American people and to grieve with the Pittsburgh community.
At the same time, friends and family gathered in a funeral home chapel not a mile away, for the service for Melvin Wax, 87, who was killed on Saturday as he came out of a dark storage room into the chapel where the New Light congregation met on the Sabbath.

“It is a week of mourning for the whole community; there are funerals that are scheduled every day,” said Rabbi Jonathan Perlman, who leads the New Light congregation and was preparing to lead services for Wax. “It’s very all-consuming, everybody is talking about whose funeral they have gone to and when the next funeral is going to be and where will it be held.”

The deaths have been on front pages globally; it is not just the family and friends who mourn them, said Rabbi Jeffrey Myers of Tree of Life, at the funeral for the Rosenthal brothers, Cecil and David, which took place the day before. But, “the entire world is sharing this grief.”