The Spokane Art School’s rebirth was years in the making 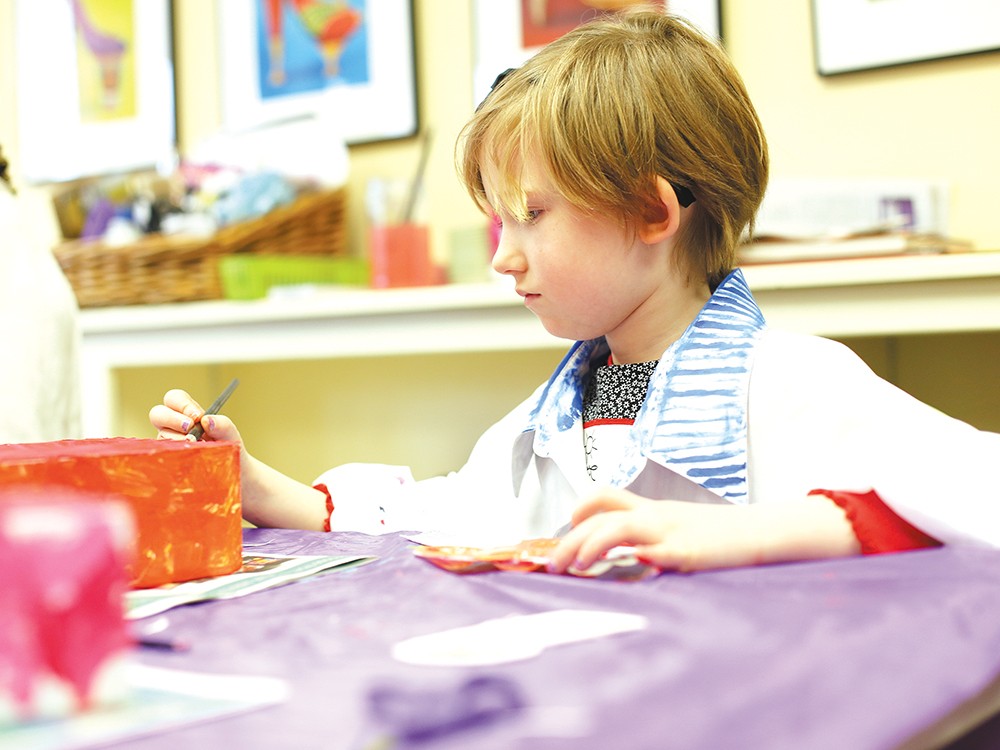 For now, the Spokane Art School’s main classroom is a makeshift setup inside a West Garland Avenue retail space. A red neon sign above the door that says “The Ruby Slipper” doesn’t give an accurate indication of what’s inside, though if you were to peek in the front windows on a weekday afternoon before the day’s art class were to begin, you’d see gray folding tables dotted with dried paint splatters and smears. You’d know that something creative happens there.

For the past four years — since the Spokane Art School’s former building just east of the Spokane Arena went up for sale in early 2008 — the school’s leaders have quietly been planning for its future reemergence, starting with the reintroduction of adult art classes last fall. And though the school may not have a permanent home in terms of a building or location, one thing’s pretty certain: Its board of trustees are determined that the school continue — and eventually thrive again — as a key player in the arts community.

“It’s worked really well as a concept of being an art school without walls,” says Spokane Art School board of trustees’ president Susan Bradley. “We can pick the best place to have the class.”

Not having a designated home for now also means the nonprofit isn’t digging too deep into its endowment fund, set up in 2008 after the $1 million sale of its building. A special advisory group of members on the Northwest Museum of Arts & Culture Foundation board manages the endowment, Bradley says.

Some professional artists in the area, like multi-media artist Ken Spiering, who hosted a two-part watercolor workshop last month at his Valleyford studio, are also teaching Art School classes in their private spaces.

Drawing off the experiences and talent of the professional artists based in the Inland Northwest is something the Spokane Art School has always strove to do, Bradley says.

“The teachers are all professional artists,” she says. “They make art to earn their livings, so getting to go to a professional studio, people get more of a realistic idea.”

Since the first round of adult art classes was reintroduced last fall, Bradley says the Art School has received interest from other groups in joining together for arts education partnerships.

“We are now once again talking with the MAC about what kind of partnership we can have with them,” she says. “We are exploring having classes there.”

And with classes filling up fast and waiting lists growing longer for the Art School’s most recent round of classes, some kind of local partnership seems inevitable.

“Even when the Spokane Art School was in its heyday, we only filled about half of the classes, but we have filled or have waiting lists for all of the classes being offered now,” she says.

It’s been encouraging for the school’s board members to see how many people are interested in taking its classes, since Bradley says there’s been little effort to advertise courses other than posting schedules on the Art School’s website.

Besides serving as a place where budding artists of all ages can master skills and techniques, Bradley says the newly revived Art School will continue to preserve another purpose it’s had since its early days in the ’70s and ’80s — to serve as an unofficial community arts headquarters.

“The original Spokane Art School was an outgrowth of the artistic community that grew up here in the mid-’60s to ’70s,” she says. “It was the beginning of careers for people like Harold Balazs, Mel McCuddin and Kay O’Rourke, and a way to broaden the whole art community, because people could come and learn from, or work with, professional artists. So, unfortunately, when it closed, that sense of community started to fracture. We lost our clubhouse.”

And though the Art School still is physically lacking a “clubhouse” of its own, Bradley says the organization’s leaders are perfectly content to let things build back up slowly.

“We are looking for slow and steady growth we can build on rather than having a big flash and a collapse,” she says.

That calculated, organic growth won’t be without challenges. That, the board expects. But one of the most difficult ongoing issues the Art School will face is how to pass on the value of arts education to the community, and especially young people.

Spiering, who’s also on the Spokane Art School board and teaches art part time at Freeman High School, says he believes teaching youth how to create art has become an exceedingly crucial issue during the modern digital age of readily available information.

“The time has never been more important to help students believe in their ability to create with their hands,” Spiering says. “To me, the Art School represents something that needs to avoid institutionalization and needs to become fluid and growing and dynamic in its adherence to the tradition of creativity.”