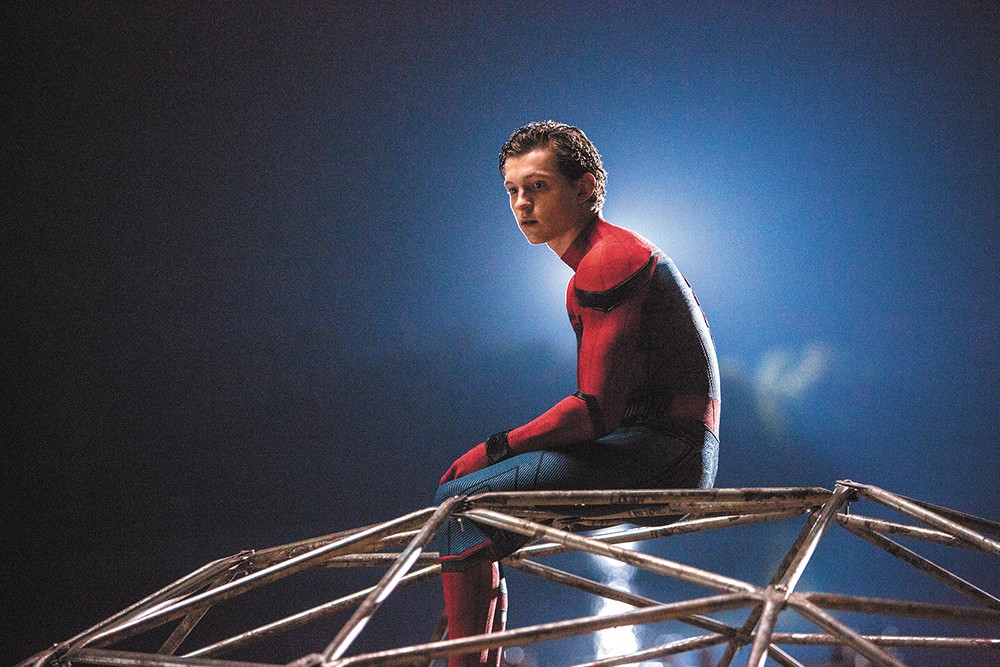 Spiderman, again, and this time it's excellent.

Some superhero movies have subtitles referring to the dramatic events or villains featured therein:

Apocalypse; Age of Ultron; Civil War; The Last Stand. Then there's Spider-Man: Homecoming, which refers to a dance at Peter Parker's high school. Yes, the new incarnation of the web-slinger is a scrawny 15-year-old who's at least as concerned about the perils of adolescence as he is about using his great power with great responsibility. He has to save the world, but there's a Spanish quiz today!

Taking Peter back to high school is one of several things Homecoming does to distract us from the fact that this is the sixth Spider-Man movie and third Spider-Man actor since 2002. (If the new Peter Parker is 15, he was born the year Tobey Maguire's Peter Parker first appeared.) But the main trick employed to keep us from feeling exhausted by the repetition is to make Homecoming exhilarating, hilarious, fast-paced, and grounded in reality. It's the funniest chapter yet in the Marvel Cinematic Universe, directed by Jon Watts (Cop Car — see it) with an eye for humorous details and recognizable teen angst. Imagine if John Hughes had made a Spider-Man movie, using a script punched up by Saturday Night Live writers (the good ones, that is).

Keeping his secret from his worried Aunt May (Marisa Tomei), Peter spends his non-school hours doing whatever heroics he can in his neighborhood, which sometimes just means giving people street directions. "The Spider-Man," as he's called, is a YouTube celebrity, loosely identified with the Avengers and included with them when Peter's female classmates play F---, Marry, Kill. But he wants to be an official Avenger, pestering Tony Stark's right-hand man Happy Hogan (Jon Favreau) for an invitation.

Meanwhile, Peter wants to impress Liz (Laura Harrier), a pretty senior at his school, and do well at the academic decathlon, and to continue perfecting his web-fluid formula (which he works on in science class when the teacher isn't looking). Soon he has a new goal, too: keeping his nerdy best friend Ned (Jacob Batalon), who has discovered his Spider secret, from revealing it to the world. Ned proves crucial to the film, grounding it, acting the way we suppose we would if we found out that our friend was a superhero. Between that and the authentic-feeling Queens locations, this might be the Marvel film that seems most like real life. It conveys what has always been the selling point for Spider-Man: he's just a regular kid, with the powers of a superhero but the brain of a teenager.

Like any kid, Peter pushes against the boundaries established by the adults in his life. In his case, that means pursuing a potentially very dangerous villain, one Adrian Toomes (Michael Keaton), who's been using stolen alien technology to develop high-tech weapons that he sells on the black market. As Spider-Man, Peter gets in over his head more than once and has to be humiliatingly rescued by Iron Man, which only makes him more determined to prove himself. He's frustrated by the "training wheels" limitations built into the high-tech Spidey suit Tony Stark made for him, and he feels stifled by his geographically small sphere of influence. (When was the last time a movie superhero worried about something as mundane as how he was going to get from New York to Washington, D.C.?)

Watts, credited along with five (!) other writers for the screenplay, marvelously keeps the story clear and cohesive, and manages to pull off a few delightful narrative surprises. He has also conscientiously inserted humor wherever he could, never in a jokey, set-up/punch-line kind of way, but naturally: a bored Washington Monument tour guide; a nihilistic classmate (Zendaya); a poster warning against identity theft in the background when Spider-Man fights bank robbers impersonating the Avengers; Captain America (Chris Evans) doing educational PSAs for public schools.

For all the hoopla over Tomei being significantly younger than Aunt May has been in past Spider-Man versions, she's sadly underused here. Apart from a running joke where every male in Peter's life has the hots for her, she doesn't serve any purpose in the story. Little else is wasted, though. Watts makes every one of the film's 133 minutes count (including the post-credits scenes), relying on Holland's relentless enthusiasm to carry us through. Let's hope there are more bright adventures to come before they reboot the character all over again.♦

Spider-Man: Homecoming is not showing in any theaters in the area.