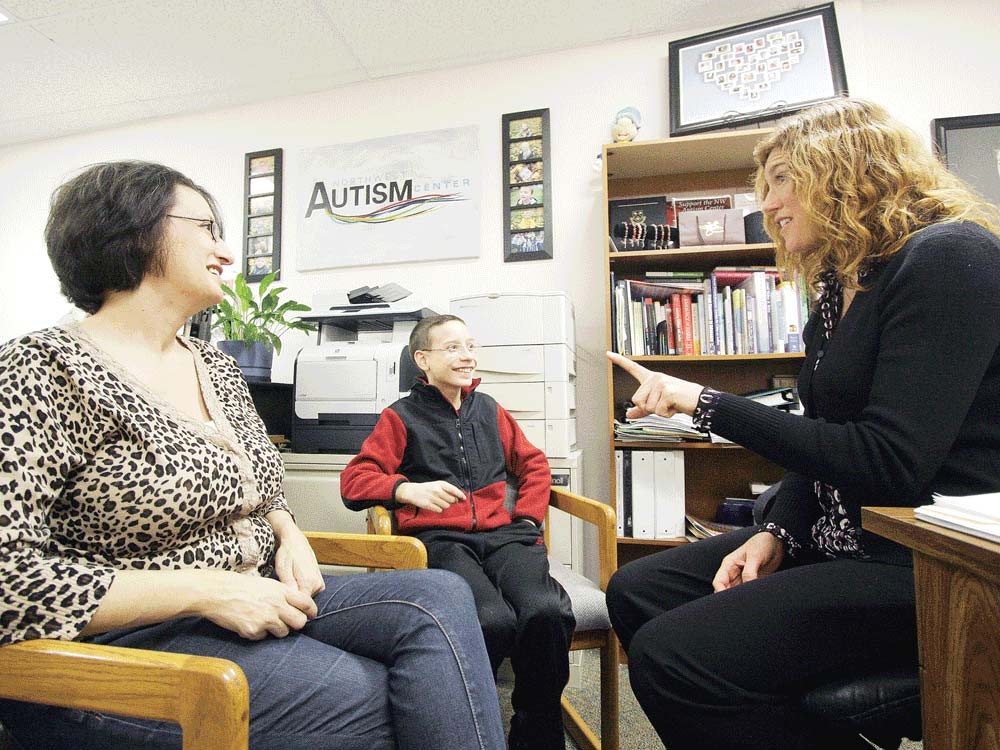 Young Kwak
Dawn Sidell with 12-year-old J.J. Clardy, who was diagnosed with Aspergers - a form of autism - four years ago.

People used to believe ice cream contributed to children developing polio. It sounds ridiculous now, but years ago it made a kind of quirky sense: Polio outbreaks were most common in the summer. Since summer was when the ice cream truck came rolling around, parents desperate to prevent their children from getting polio would ban ice cream.

Ineffective, but harmless. A more recent coincidence, drawing a correlation between autism and vaccination — children were diagnosed with autism soon after the time they received vaccination — has proven to be just as spurious but far more damaging.

In 1998, The Lancet, a respected British medical journal, published a study by Dr. Andrew Wakefield, purporting that the vaccine for measles, mumps and rubella, or MMR, might be contributing to autism.

The study was never replicated. Only 12 children took part in it. Respected scientific studies again and again showed that there was absolutely no evidence vaccines could cause autism. None.

In fact, when MMR vaccines were withdrawn in Japan in 1993, autism diagnoses actually increased.

Now the study has been revealed as a fraud, possibly concocted for Wakefield’s financial gain. He’s since lost his license, and The Lancet retracted the story.

Case closed? Not so fast. The fall-out from the hoax continues to ripple through the autism-concerned community. After the results of the original study first broke, significant numbers of parents, worried about the risk of autism, began declining to have their children vaccinated. Vaccination rates in Britain fell from 95 percent to 80 percent. There was a costly outbreak of measles in Los Angeles. Ten infants died from whooping cough in Chicago. Four unvaccinated children — three in England, one in Ireland — died of measles.

Stephen Luber, a pediatrician at Rockwood Clinic in Spokane, says that he’s seen children become sick because their parents won’t vaccinate them.

“Most of the illnesses that we prevent with vaccines cannot be treated once [it gets] started,” Luber says. Without a vaccine, there’s no cure for polio, diphtheria, whooping cough or tetanus.

The controversy had other, more insidious impacts as well. Dawn Sidell, executive director for the Executive Director for Northwest Autism Center, says blaming parents for their child’s autism — in this case by surmising it was because they got their children vaccinated — has never been helpful.

“It seems like we frequently come back to a position where parents are somehow put in a culpable position for the disorder,” Sidell says. “In 1949, Leo Kanner wrote a paper that emotionally cold mothers were responsible. That had a horrible impact on families — nervous breakdowns, suicides.”

Another recent study examined the relationship between birth-spacing and autism, which worried at least one local parent.

“The parent felt that, ‘I should not have had my kids so close together,’” Sidell says. “These studies that continue to make very loose connections for causes that may not have anything to do with autism continue to send us down these funny rabbit trails.”

"If you don’t want to immunize your child, you should probably find another pediatrician.”

And that distracts parents from the very real battle ahead after a diagnosis of autism.

“We don’t have any treatment options for you.

That’s the part that really gets parents,” Sidell says. “Parents leave reeling from that. They finally get educated and informed about what kind of research they need to move forward. Then they find their insurance doesn’t cover it.”

Sidell says that for kids with autism, and their families, the debate over vaccines “completely detracts from what they need and what needs to be done.” Even worse, just at a time when families need the support of an understanding community, the debate has proved polarizing.

“It’s difficult to have conversations around vaccines and autism,” says Sidell. “People that start with that question, they wait with bated breath for the answer.”

For the medical community, it has also proven to be a challenge. Parents may reject pediatricians who advocate vaccination, and pediatricians may be stymied by patients who won’t follow their recommendations.

Luber tries to be patient with concerned parents.

Most of the time, he finds that if he recommends vaccines enthusiastically, and lays out the science, parents’ concerns are assuaged. But he is fairly emphatic, saying, “If you don’t want to immunize your child, you should probably find another pediatrician.”

Sidell agrees that conversation and compromise can be helpful. Sometimes parents just need reassurance to feel that they are doing everything they can to protect their child. It may be as simple as changing the routine way in which vaccines are administered.

“Is there a way to do the vaccinations over a longer period of time?” she wonders. “Can we do one at a time, or two at a time? You need to get a foot in the door.”

This article appears in the current issue of InHealthNW, The Inlander’s health magazine.