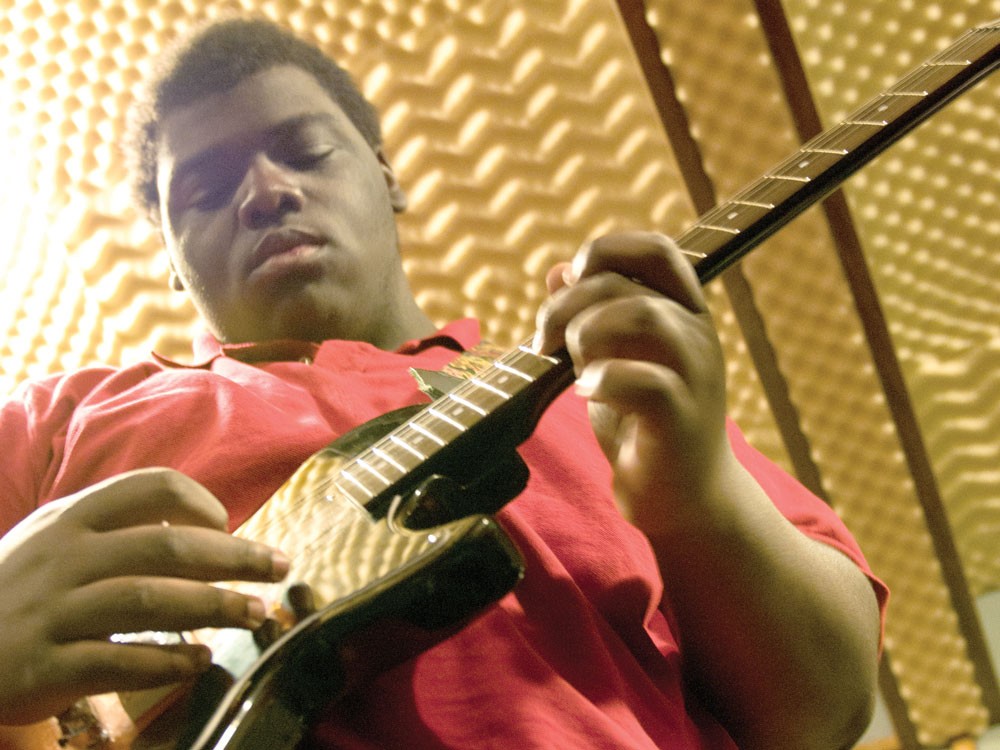 Amy Hunter
LeRon, 17, takes to the guitar during band practice at the Village Project studio.

Outside a bright red garage door comes the crunch-crunch-crunch of electric guitar chords accompanied by the thwap-thwap-thwap of a drum kit. The band of three noisy teenagers inside would indeed b e at home in a garage — but instead, they are practicing in a fully stocked recording studio. That red garage door outside is misleading.

“Are they playing ‘Dueling Banjos?’ Did they just stumble on that on their own?” says Bill Bergin, laughing as he and his business partner, Doug LaPlante, jump up to peer out the window of the sound-proof room into the studio where the kids are practicing. Hearing the kids play a little snippet of a song is what these two men live for. It means they’re doing something right.

Both Bergin and LaPlante have b een musicians for decades and friends for 20 years. What started as dreams of their own recording studio morphed into what is now the Village Project: a nonprofit program that not only gives low-income youth access to music lessons and a space to practice and record, but also provides them with instruments. And with music, the men say, comes a way for kids to build autonomy and confidence.

“For kids who don’t have much at all, it can be a pretty big thing,” says LaPlante.

The two have since expanded their project, reaching out to kids ages 7-14 through organizations like the Boys and Girls Club and the East Central Community Center. They start by playing a show for the kids, then letting them scope out the instruments after the set. From there, the kids are able to decide if they want to register. If they do, they will pick an instrument and style they want to focus on — anything from rock to classical and jazz — and they’ll meet in small groups with a teacher who specializes in that area. Though the kids will receive instruction, they are cut loose with the instruments to explore on their own.

“The goal is to get these kids really playing, even though we’re casual about it and not pushing them,” says LaPlante. “They can learn how to play together … and put little groups together.”

One of those little groups is the yet-to-be-named band playing in the studio: The two guitarists, Aaron, 18, and LeRon, 17, are now meddling with “Yankee Doodle” and a few solid bars of “Louie Louie” while their drummer Kris, 15, tags along. Though the band is only two months old, being in a band has been on their minds for a long time. They’ve finally realized that with help from the Village Project.

“We went from not knowing how to hold an instrument to actually being able to play a few good chords,” says Aaron. All three boys immediately respond with the word “awesome” when asked about LaPlante and Bergin.

While they’ve had some success with donations, LaPlante and Bergin are hosting a fundraiser at the Bing featuring a show of local bands, with a wine, chocolate and coffee tasting. Now that more kids like Aaron, LeRon and Kris are joining, the Village Project is in need of more instruments and funds to hire teachers. LaPlante says they have around 80 kids waiting to get instruments.

LaPlante and Bergin are committed to giving music to kids, especially ones who wouldn’t have access to it otherwise. To them, this is basic stuff. Every kid should have access to creativity.

“It seems like a natural thing to me, it doesn’t seem like we’re doing anything big, it seems like everybody should be doing it,” says LaPlante. “Why punish the kids because they don’t have enough?”

A Tribute to the Highwaymen @ Lake City Center