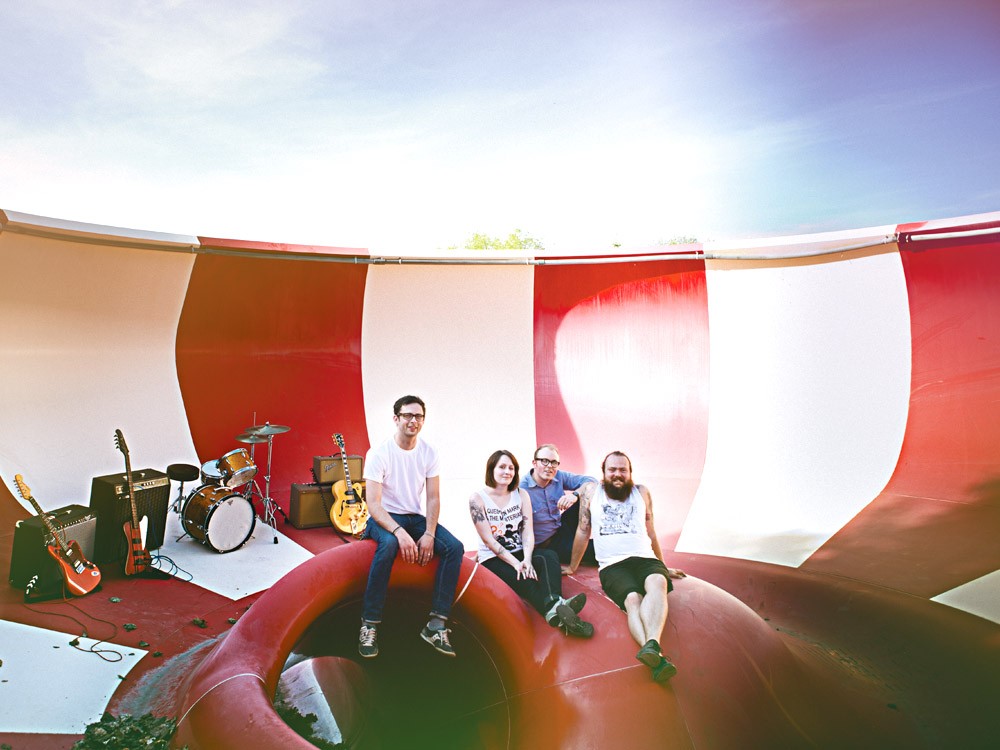 Kristen Black
SOUNDS LIKE: "A Young Dick Dale stepping out of a time machine in 2012"

Gawain Fadeley should be more nervous than he’s currently projecting. If not nervous, at least a little on edge. At the very least, this surf guitar virtuoso should have his cellphone out on the bar table around which the other four member of his band, BBBBandits, are gathered.

His wife is five days past the due date of their first child. It’s not like he doesn’t care. He cares — of course he cares. The call could come any minute and he’s ready for it, should that happen. Across the table, rhythm guitarist Ryan Tucker knows the feeling. His wife just gave birth to their second child less than a month before. But Fadeley remains his cool self. Not too worried, but not too aloof either.

This is because, as the members of the instrumental rock outfit — four Spokane natives who’ve known each other since high school or before — will tell you, they’re “grown-ups.”

They use the term partially in jest, but just minutes before, the BBBBandits (you’re supposed to pronounce it buh-buh-buh-bandits) were brainstorming a spot for their new practice space because, well, Fadeley’s house is obviously not going to suffice anymore — ya know, with the baby and all.

“We’re not trying to put out albums or anything like that right now,” says Tucker, a television videographer who, incidentally, made the AP news wire recently when his wife’s car was stolen for the third time in the span of six months.

Music is a hobby, confirms drummer Jeff Glinski, whose bushy hair and bushier beard make him look like a friendly version of one of those Capital One Vikings.

The others agree — they all have full-time jobs — but that doesn’t mean they’re not passionate about cranking out the sort of air-tight instrumental rock numbers that have brought an increasing number of fans to their shows. The lazy man’s description of this band would be “surf rock,” but BBBBandits don’t know if that’s entirely accurate, even if they won’t blame you for calling them this.

“When you say ‘surf,’ you think of the Beach Boys,” says Glinski.

“I think of Frankie and Annette and Beach Blanket Bingo,” says Tucker, the 31-year-old elder statesman of the band. He lets out a series of high-register laughs.

Fadeley, a Gonzaga graduate who now spends his non-rocking hours working for Spokane Teachers Credit Union, does, however, have the guitar chops to elicit memories of surf rock’s glory days. In concert, his guitar is the de facto vocalist of the band, providing the melody over BBBBandits’ tightly wound numbers, which never seem to go much past the two-minute mark. The reverb-soaked riffs bring older fans to the shows who haven’t heard things like this since the advent of FM radio. Vice calls Fadeley the “only one of us who’s an actual, honest-to-God musician,” but Fadeley brushes that assertion aside with nonchalant modesty.

He’s never been trained in music, he says. He just picked it up.
“I’ve studied the rock canon. I can’t read music, but if you listen to enough stuff, it’s all there. Once you figure out that it’s all the same 12 notes,” says Fadeley.

Live music fans in Spokane have caught on. BBBBandits’ fan base ranges in age from 16 to 60, often packing their barroom shows from one wall to the other.

Still, this band is just a hobby for these “grown-ups,” so you can’t blame them for being so surprised when other people want to indulge in their recreation.

“I always liked us,” says Vice “But I didn’t expect us to get so much support from people.”

BBBBandits play Volume on Fri, June 1 at 11 pm at the Red Room Lounge.