FAUS is thrashy, loud, sweaty and provocative. And extremely entertaining. 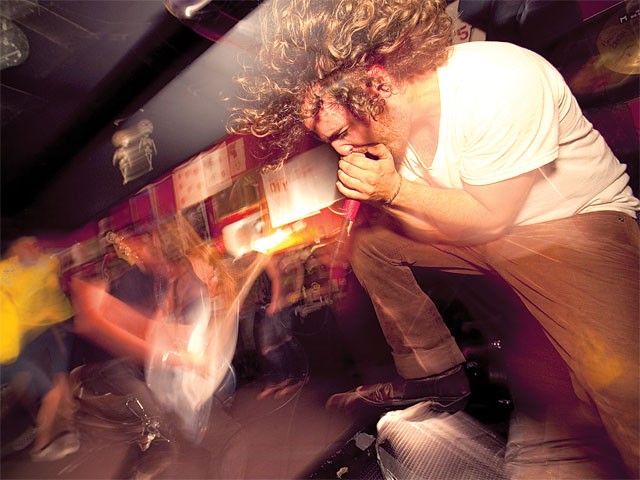 On a recent Monday night, the Cretin Hop belonged to FAUS. In, like, an Oklahoma land-grab sense. The band laid claim to the entire stage and about half of the floor area. Then they defended it like frontiersmen — though attacks on their territory were few.

“A lot of people step back,” says Alex Chaffin, bassist and main crowd agitator. “Most people, once we get on, are, like, ‘OK, let’s make a barrier.’” It’s an act of self-preservation that fans of FAUS are trained for.

In the same way arena rock bands spread themselves across massive stages, FAUS projects its fury deep into the crowd.

Chaffin swung the head of his bass like a club and stalked the perimeter of the band’s territory while guitarist Mike Angelini spun and flopped around.

At one point, a kid from the audience leapfrogged Angelini, and at another, vocalist Paul Patton — a tiny bundle of energy with a surprisingly huge voice — put his head between guitarist Anthony Perez’ legs, lifting Perez onto his shoulders and into the air.

It all contributed to a mood that the band aptly described as a bunch of kids having seizures. And it perfectly mirrored the music, a kind of controlled chaos. Hardcore, but with odd time signatures. Tight, but with a lot of room for improvisation. Always ear-piercingly loud.

And yet, for all this chaos, FAUS aspires to be a thinking person’s experimental hardcore band.

“I remember hearing Dillinger [Escape Plan] for the first time and just having to think about it and still not figuring it out. We wanted to blow people’s minds [like that],” drummer Ezra Christopher says. “We don’t necessarily do that, but we’re headed that way.”

At 22, Christopher is the oldest member of the band, and given to offering grandfatherly advice in sentences that begin with, “These days …” He’s the acknowledged creative center of the band.

And if they treat Christopher as their leader, they treat Angelini’s virtuosic guitar as a kind of shamanistic thing. It’s an impression Angelini fosters. “Sometimes [guitar parts] come to me in dreams,” he says. “It’s weird. Sometimes it’s like the soundtrack to my dream, and other times I’m playing it in my dream.”

The band has aspirations beyond hardcore. “We like more than just thrashy, terribly loud, heavy music,” Christopher says. “We’ve been writing pretty stuff in our newer songs.”

No one offered any elaboration, and certainly nothing pretty made it into the show at the Cretin Hop. It was all punishing tempo changes and constant provocation.

“It’s what I use as the outlet for all my anger.” Angelini says, ticking off the side benefits of the FAUS live experience. “And it’s probably the most exercise I get.”

“We do it to get buff,” Chaffin agrees. As the tight squall dropped to a chaotic din, Chaffin dropped his guitar and ran headlong into the crowd.

No matter how pretty their new stuff is, the live shows will probably remain, in the words of Mike Angelini, “Sweaty … loud … violent.”

“We want to be as into it as possible,” Patton says afterward. And for that to happen, they need to feel like the crowd is into it.

“So we leave them no choice,” Patton says, breathing heavily. “We have to help them help us.”