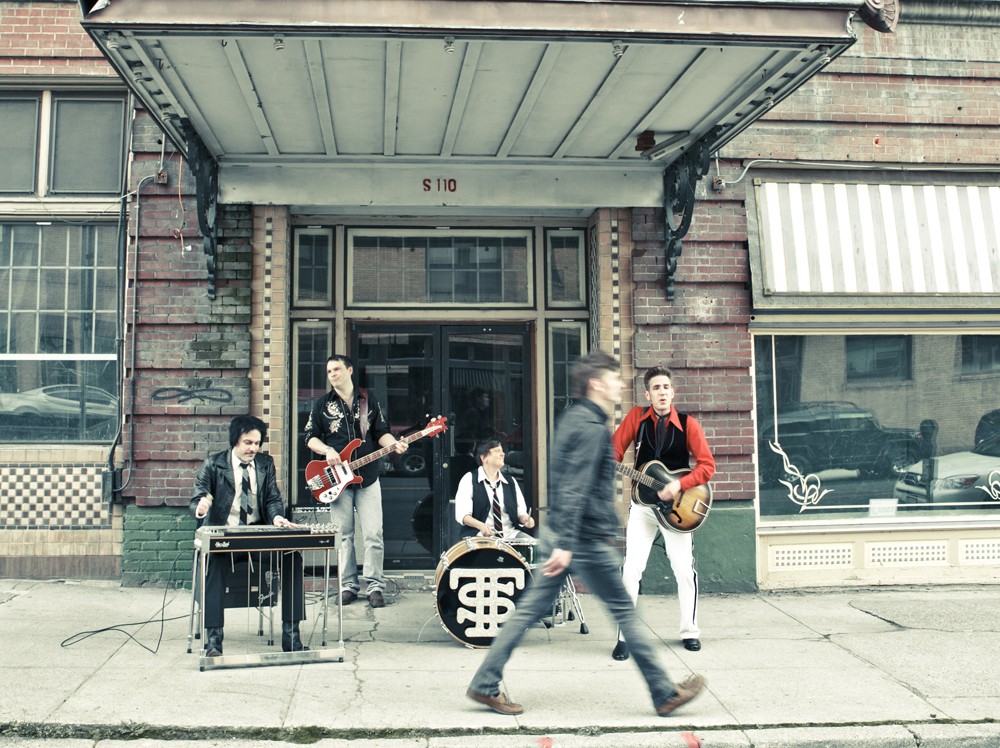 Everyone’s seen it: the first drunk girl at a party who starts dancing — by herself — in the middle of an empty living room.

“That was [my] favorite moment at any party — where there’d just be, like, one girl dancing,” says Kevin Cameron, the singer for Silver Treason. “People won’t look at her and it makes people uncomfortable. That tense moment — I love that, because then eventually somebody else will go out. And then you’ll see two people dancing, and then another couple.”

In a way, Silver Treason is like that drunk girl.

The two-year-old band is one of the first — and certainly most prominent — local bands to bring country music into Spokane’s popular music venues. The four-piece doesn’t sex up country music in the way that pop country (Lady Antebellum, Taylor Swift) does. They’re anchored in a sound you don’t hear much anymore: a solid, persistent twang from Jamie Frost’s pedal steel guitar.

“I think real country is like punk when you get down to the roots of it,” Smith says.

The band’s members — Cameron, Frost, bassist Bill Barrington and drummer Cameron Smith — all played in punk and rock bands across the region over the past 20 years: the Young Brians, the Makers, Big Yuck Mouth, the Neurotic Jesuits, the Creepers, the Quitters, Guitarded.

Smith, Frost and Barrington dabbled in alt-country in their old band, Burns Like Hellfire. But it wasn’t until the three of them saw Kevin Cameron, an old friend, perform his solo material that they decided to go all out on the twang factor.

“We had had a conversation, just, like, one time hanging out waiting for a show, where we were, like, ‘We should just be Kevin’s back-up band,’” Smith says.

Frost, best known as the guitarist in the Makers, had recently purchased a pedal steel guitar. And though some of Cameron’s songs had a slight country tinge, as Silver Treason, they took on a new feeling.

“If it’s not a country-sounding song, you put pedal steel on it and it’s already halfway there,” Smith says.

The band admits that country fans might not like Silver Treason. Silver Treason is more Western — think Hank Williams and Waylon Jennings — than what modern radio stations play.

Cameron, who writes the lyrics, is a fireside storyteller. On “Month of Somedays,” he blends the wanderlust of those old outlaw musicians with dreamy Americana: “Someday I’ll drive a fine auto that rides like a dream/ Someday I’ll reside in the coziest house you’ve ever seen/ Someday I’ll gain great acclaim and be world renowned/ Someday I’ll find me a whirl of a girl and settle down.”

“There’s a familiarity to it,” Barrington says, “so there’s a safety to it. But there’s still something that makes it interesting and out-of-the-ordinary for people.”

At this point, the band — some with kids, some with full-time jobs — laughs at the idea of being rock stars someday. They’re not interested in hitting the road. They haven’t pressed an album or made t-shirts. All of that would kind of squash the fun they’re having.

“We’ve all played in the bands that set the goals and then one person, it turns out, doesn’t have the same goal, or circumstances change,” Smith says. “It’s almost better to stay in the moment.”

And right now, they’re just enjoying that people are starting to join them on the dance floor.

A Message from the Editor

There’s a good chance that the past year in local music might be one remembered more for its losses than its victories. Like the one-two gut-punch that was the closing of the Seaside in the fall and the Empyrean in early 2011.

When our local music committee first assembled back in March to discuss the region’s best bands, we came up with 60 local bands worthy of watching. Six-ty. Some were brand-new — high school kids with amazing talent and excitement for the local scene. And some were seasoned music vets who’ve continued playing in Spokane for decades.

We may have fewer venues than in the past. Maybe we don’t have tons of promoters either. and Maybe many great touring bands skip over us. Well, screw ’em. We’ve got amazing talent right here. And in the following pages, you’ll read about five local acts that we’re proud to say were bred on local turf. Trust us, you’re gonna wanna keep an eye on these guys.