Tim Blood and the Gutpanthers will do/play/sing/yell whatever they want. 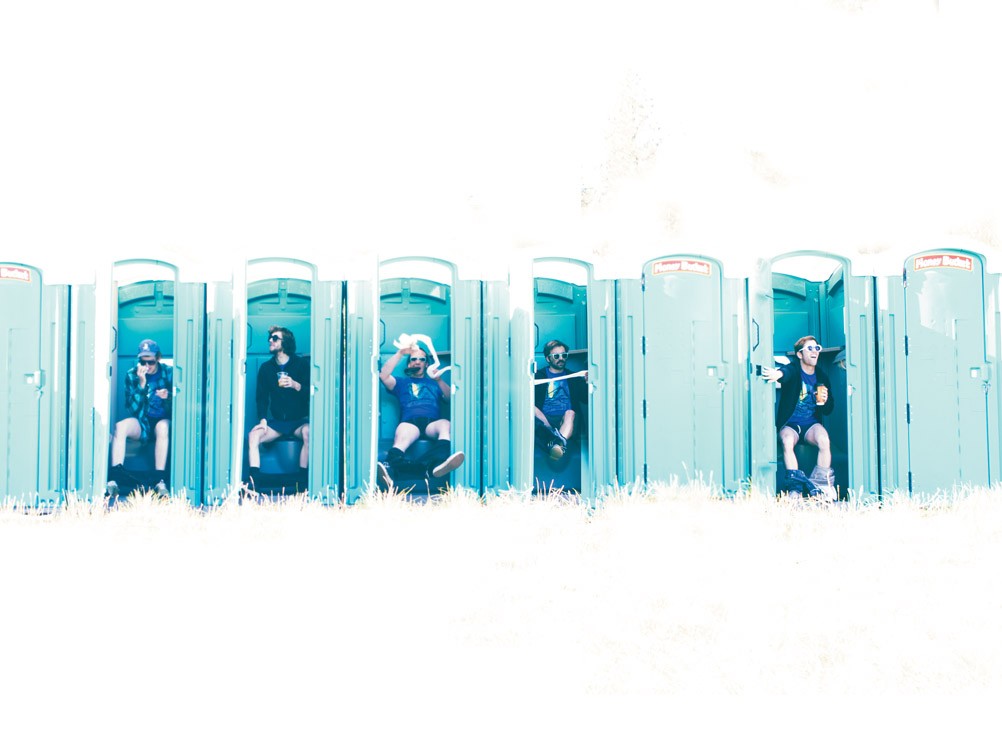 Kristen Black
SOUNDS LIKE: Flipping off your boss, quitting your job, doing a cannonball off the rood and raiding the ice cream man.

An hour has passed since Tim Blood & the Gutpanthers were supposed to start performing in the dingy living room of a Peaceful Valley house. Most of the band’s members are here — but no one seems to know where Keith Feltis, the band’s guitarist, ran off to. A scraggly group of punk kids and a band from Missoula patiently sit in the driveway, lighting cigarette after cigarette to pass the time. They’re content to keep waiting.

Earlier that day — an unseasonably warm and sunny April afternoon — the members of the Moscow power-punk band (except for Feltis, who was working) lounged in the outdoor hot tub of the downtown DoubleTree Hotel. They’d snuck in to soak up some rays, and no one — guests, staff — seemed to flinch at their presence. In different colors of oversized plastic sunglasses, the band exuded a youthful insouciance as they talked about their lives as punks in the North Idaho panhandle.

Much like the punks before them, and the punks before them, their devil-may-care attitude has earned the members of the band a tiny police problem. As they talk, it’s clear that their various scuffles with the cops — noise complaints, busted-up parties, driving without licenses — have almost become a point of pride.

Especially that one time three of them were branded by Time magazine as terrorists.

“As a way of saving the planet, throwing eggs at a car dealership is a pretty dumb idea,” reads the 2009 article, entitled “Top 10 Inept Terrorist Plots.” “It’s even more stupid when your terrorist manifesto warning of retribution for ‘perpetuating the ignorant use of fossil fuels’ is written on the back of the grocery receipt for said eggs.”

Singer Tim Berge, in green shades, clarifies: “We don’t have any political agenda. We were just bored.

“We invited the cops over to confess and we were making omelets,” he says, smiling.

That sends the band into giggles.

It’s an attitude that translates to their music, too. The band formed when all of its members were undergrads at the University of Idaho, and they perfected their sound at house shows in Moscow, despite the fact that none of the members felt they really fit in there, between the jocks of Pullman and the hippies of Moscow.

“I’m not sure if people encounter us and think they should take us seriously?” Ryan Beitz, the band’s drummer, says, now standing in the center of the hot tub. “I don’t think people get what we’re trying to do.”

“We try to make pop songs with a really aggressive energy. We bring as much punk-rock attitude as possible to making pop music,” he says.

The band’s latest, a salmon-colored full-length called Summer of Our Discontent, is forceful and seeping with youthful optimism.

“How can I afford to write if I can’t afford to eat, or even turn on the heat,” Berge growls on “Trampoline.” Other songs, like “South Dakota,” channel that same creative boredom that caused them to buy eggs and throw them at buildings. “I drove to South Dakota, just to see if it really exists,” Berge yells.

“[Our music is] kind of threatening and loud and triumphant,” Beitz says of the band’s sound.

“And kind of wimpy. It’s got a lot of plumage,” bassist Ian Corrigan adds.

But the album’s malaise and its optimistic “f--- it all” attitude makes this sound like nostalgia music — stuff that aches for a time when things were better, or for a time when everything felt like it would only get better, but didn’t.

Onstage, the band turns heads with its antics, writing on themselves as they perform, dumping boxes of Speed VHS tapes on stage, hanging upside down from rafters or pipes.
And while Tim Blood feels so young in its lyrics and stage presence, the band — comprised of all 24-year-old members — exudes a much older sound: the Replacements, Husker Du, the Sex Pistols.

Corrigan laughs, his head just above the waterline in the hot tub: “We really touch the hearts of 30-year-old men.”

Lately, the band has also gotten the attention of regional music events like Boise’s Treefort Music Festival and Portland’s Gathering of the Goofpunx. They’re working on a new EP and a new full-length album. They’re planning to tour nationwide this summer in a van that reads CARE-A-VAN on the side.

This band — it is about goofing around, but it’s more than that.

“We do it because we’re friends,” Berge says.

Beitz agrees: “It’s the only thing we do in our free time.”

Later at the house show, Corrigan starts leaving messages on Feltis’ cellphone. It’s been an hour and a half since they were supposed to start playing, and a few people have given up and left.

Feltis ambles up the driveway a few minutes later. The show can start now in appropriate Tim Blood fashion: He thrusts two boxes of ice cream popsicles over his head. He thinks he has enough for everyone.