Could Spokane create a nonprofit to turn foreclosures and vacant lots back into thriving neighborhoods? 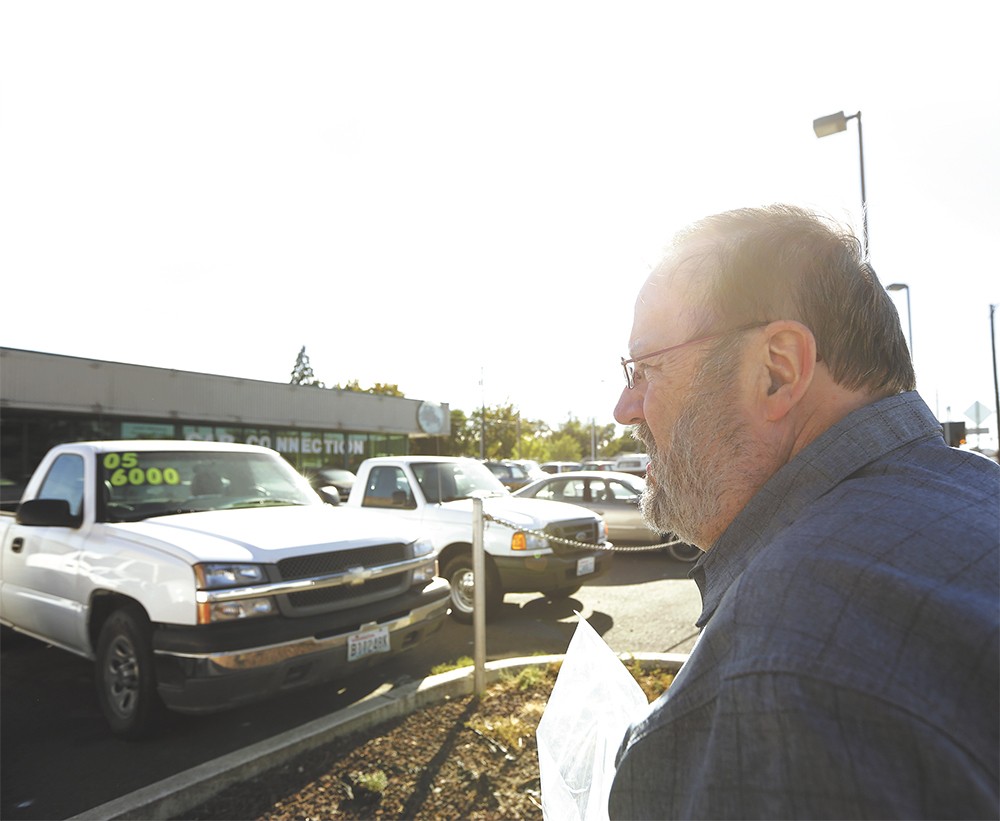 Young Kwak
Chris Venne of Community Frameworks says this car lot will be replaced by apartments — but with a land bank, even more homes could have been built.

is standing in the run-down car lot next to the Checkerboard Bar on East Sprague. He's holding posterboards filled with renderings of modern three-story apartments and narrow, gray two-story townhomes.

Construction will start next month. The car lot will be torn down. So will the former drug house behind it. In its stead, the nonprofit will raise up 36 apartment units and 18 townhome units, creating high-quality housing for low-income Spokanites to rent.

It's exactly the sort of result that two city of Spokane task forces formalizing recommendations this month — the Infill Development Steering Committee and the Mayor's Housing Quality Task Force — are trying to emulate.

But when Venne looks at this property, he also sees a big missed opportunity.

The trouble, he says, was that the landowner wasn't willing to sell without Community Frameworks also purchasing the Vien Dong Vietnamese restaurant across the alley.

"A package deal," Venne says. "We couldn't do this. The money we had couldn't be used for commercial acquisition."

Community Frameworks sought a solution, Venne says, but the opportunity disappeared. The lot will remain vacant.

Many communities across the country do have an answer to problems like these: A powerful community entity called a "land bank" allows these communities to buy up property, handle foreclosures, and facilitate land deals for the public good. Both the infill committee and the housing quality task force have raised the same suggestion: Spokane could create a powerful entity to help build new houses and resurrect old ones.

A land bank is not a new idea. Across the country, around 75 communities have created land banks as nonprofits or quasi-governmental entities, funded through revenue sources like land sales, foundation grants and local tax revenue. Depending on state laws, land banks vary in power and purpose, but they all focus on revitalizing vacant lots and foreclosed properties.

"Developers keep saying there's not enough pieces of land to develop, and the pieces are too small," Murano says. "Some of the developers, they want to do a neighborhood. They don't just want to do a house here or an apartment here. They want to be, in the old-fashioned term, a developer."

A land bank could make that possible, she suggests. It could focus on buying up sections of property, one house at a time as they become available, until it has enough for a large-scale development. In a way, a land bank can be a real-estate middleman, setting the stage for huge deals.

"A land bank is one of the tools that we're really considering right now to promote mixed-income development, to promote our core neighborhoods," says Jonathan Mallahan, director of Neighborhood and Business Services for the city of Spokane. Granted, the idea is still in the theoretical stages, but Mallahan sees the land bank proposal as a possible way not to replace the role of the private sector, but to augment it.

"This is government helping make space for investments in the private sector to make financial sense," Mallahan says.

Loretta Cael, housing counseling program manager for SNAP (Spokane Neighborhood Action Partners), has seen another problem a land bank could help fix: Houses go into foreclosure, the tenants are evicted, and the houses stay tangled up in the foreclosure process for years. It can take three years for owner-occupied houses to wind their way through the U.S. Department of Housing and Urban Development foreclosure process, she says.

Meanwhile, she's teaching a homebuyer class to people well-qualified to become homeowners in those foreclosed properties, but those properties aren't available.

Instead, the homes sit vacant. These houses drive down property values. Blight leads to more blight.

"The longer the property sits, the more damage it does to the neighboring properties around it," Cael says. "It spreads like a wildfire."

She sees a land bank as a possible solution. She believes such a bank would have the resources and sway to negotiate upfront with HUD and get early purchasing opportunities from the federal Distressed Asset Stabilization Program, in order to snatch up foreclosed properties for pennies on the dollar before they're mired in bureaucracy.

"The quicker we can turn those and get new owner-occupants in them, the better off the values in the city would be," Cael says.

The biggest land bank in the country — the Genesee County Land Bank in Flint, Michigan — focuses mostly on foreclosures.

The collapse of the auto industry made Flint a haven for foreclosures long before the recession. That, in turn, made lucrative for out-of-towners, who would snatch up tax liens on private properties, caring little about the property other than the chance of making a profit.

But Christina Kelly, director of planning and neighborhood revitalization for the Genesee County Land Bank, says the state of Michigan reworked the way it handled liens and foreclosures more than a decade ago.

Now, foreclosures that don't sell at auction are handed over to the land bank. And because of the way foreclosures are bundled to avoid being bought by speculators, about three out of four foreclosures end up in the land bank's hands. The Genesee County Land Bank can choose who it sells to, favoring those who have a clear vision to improve the property over speculators or shady house-flippers.

Kelly estimates that the Genesee County Land Bank has obtained around 15,000 foreclosures countywide over the years. "We've taken on more than we can afford to deal with," she says.

Still, she says that Flint and Detroit are moving faster than any other communities in the country to demolish blighted properties. Kelly says it's crucial that communities considering emulating Genesee County — like Spokane — give their land bank the right tools to pull off a broad mission.

"I think that it doesn't really help just to set up another authority, unless that authority has some powers and access to resources," Kelly says. 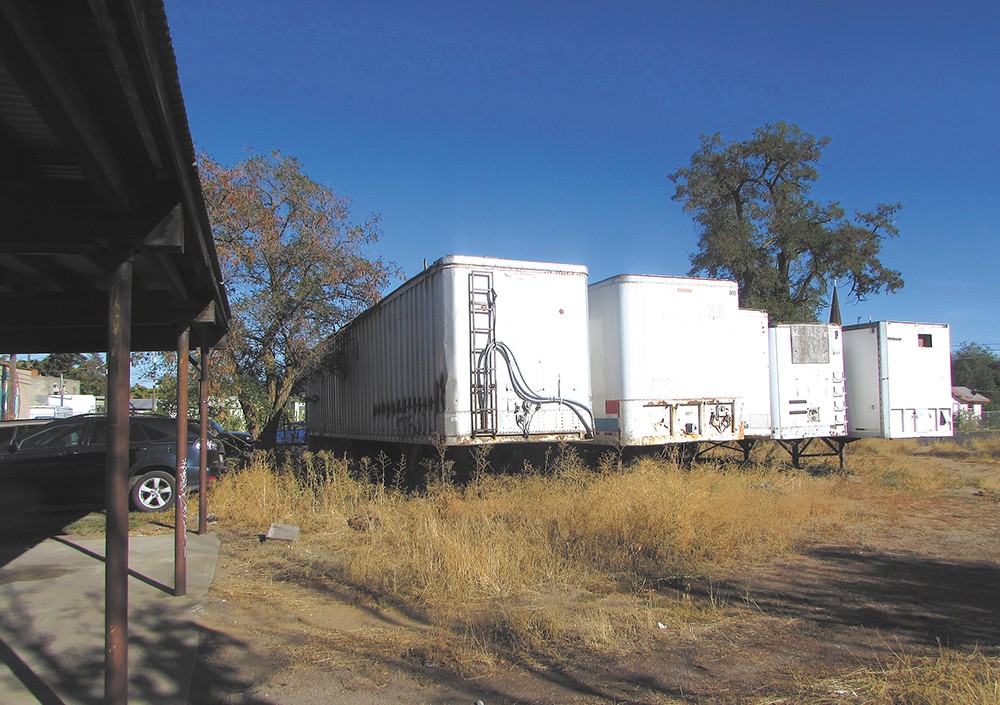 Daniel Walters
If Community Frameworks had been able to partner with a land bank a few months ago, it might have been able to build townhomes on this property.

Eventually, a land bank can pay for itself through grants and property sales, but it needs a lot of capital to start with. Community Frameworks' Venne estimates it would need at least $1 million initially.

"You need to have it immediately liquid and available," Venne says. "Real estate transactions are very time-sensitive. Sometimes they're on the market a very short period of time, and you've got to jump on it."

This is not the first time that Spokane has considered the land bank idea. Al French, a developer-friendly Spokane County commissioner, says he was part of a push in the early 2000s, when he was a city councilman, to implement a land bank, possibly using federal Community Development Block Grant funds. But French says the lack of clear city regulations for developing infill housing became a hurdle. And Cael says that, back then, the improving real estate market sent the idea to the back burner.

"Everybody gets busy and the market gets hot and there's a lot of property for sale, and we stop doing those things that are necessary to create affordable housing," Cael says.

Today, with more foreclosed properties than ever, French, Cael and Venne, among others, hope that this time will be different.

"The need is clearly there. If the city is moving forward on that kind of initiative, God bless," French says. "The trick about a good idea is that a lot of good ideas have to wait until the time is right." ♦ 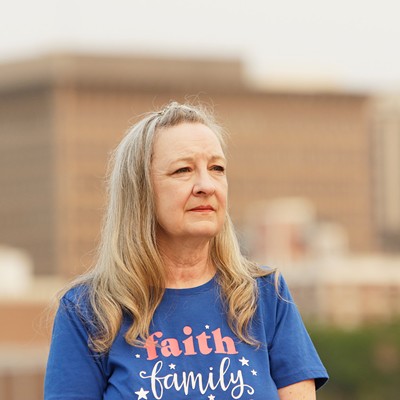 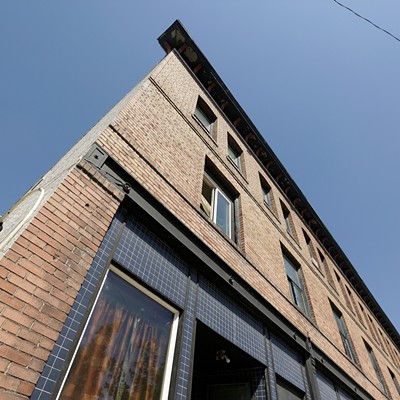