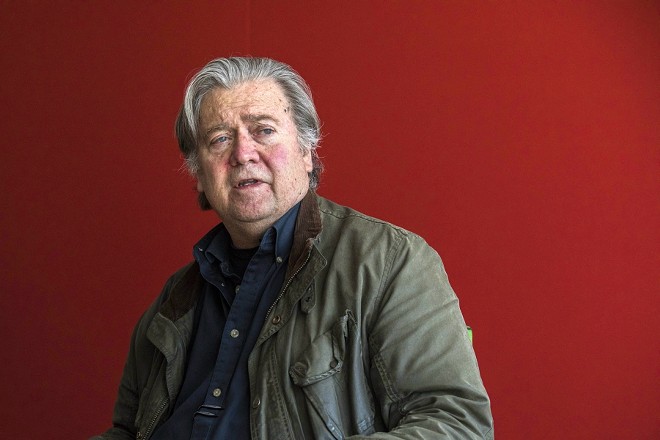 Hiroko Masuike/The New York Times
Steve Bannon in New York, Nov. 8, 2017. Bannon, who is quoted in a new book calling Donald Trump Jr.’s meeting with Russians in 2016 “treasonous,” tried to reverse his statements, saying that the younger Trump was “both a patriot and a good man.”
By JEREMY W. PETERS
© 2018 New York Times News Service


WASHINGTON — Stephen K. Bannon is stepping down from his post as executive chairman of Breitbart News, the company announced Tuesday.


Bannon’s departure, which was forced by a onetime financial patron, Rebekah Mercer, comes as Bannon remained unable to quell the furor over remarks attributed to him in a new book in which he questions President Donald Trump’s mental fitness and disparages his elder son, Donald Trump Jr.

Bannon and Breitbart will work together on a smooth transition, a statement from the company’s chief executive, Larry Solov, said.

In the statement, Bannon added that he was “proud of what the Breitbart team has accomplished in so short a period of time in building out a world-class news platform.”

Bannon’s departure from the website is the latest ignominious turn in a career that was once one of the most promising and improbable in modern American politics.

Though he was virtually unknown outside of his work at Breitbart, Bannon was named chief executive of the Trump campaign 2 1/2 months before Election Day. And he helped instill the discipline and focus that allowed Trump to narrowly prevail in the three Midwestern states that gave him victory in the Electoral College.

He accompanied Trump to the White House and became his chief strategist. With an office in the West Wing and a direct line to the Oval Office — he reported to no one but the president initially — he seemed well positioned to wreak havoc on the political institutions and leaders he railed against as too corrupt and self-serving.

But after repeated clashing with Ivanka Trump, the president’s elder daughter, and Jared Kushner, her husband and Trump’s senior adviser, Bannon was pushed out after less than eight months with the administration.

No one has been more closely identified with the Breitbart website or had more to do with emboldening its defiant editorial spirit than Bannon did after its namesake, Andrew Breitbart, died of a heart attack in 2012.

Once outside the administration and free to pursue his political enemies, Bannon set out on an audacious mission to challenge Republican incumbents he deemed insufficiently loyal to Trump’s agenda.

His full-throated, unfailing support of Roy S. Moore in Alabama even after allegations surfaced that the former judge preyed on women as young as 14, ended in an embarrassing setback: Democrats took the Senate seat for the first time in a generation.