Uncovering the storied past of the Park Inn, one of Spokane’s oldest restaurants 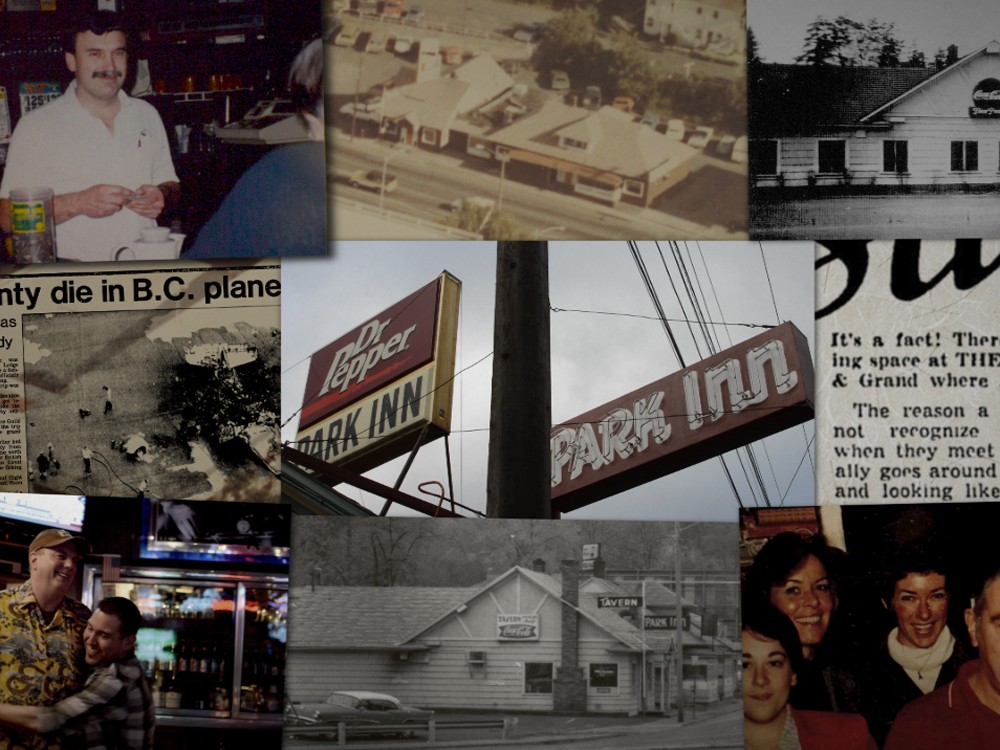 Editor’s Note: Nathan Brand, our video intern, has been painstakingly researching and producing a documentary about the history of the South Hill restaurant and bar, the Park Inn. With the video now complete and troves of new and perhaps forgotten information uncovered, here’s a little background about how Brand pieced together this intriguing story. Have a read and then check out the video.

I knew the Park Inn was old but I didn’t know how old. The manager took an ad out in the Inlander’s Annual Manual that said: “Serving Spokane for over 76 years.” I was impressed — but its history ended up reaching back even further than that.

One Saturday night, sitting at the Park Inn’s bar after getting off work, I’d overheard the bartender telling the story of the plane crash that killed the previous owner of the Park Inn, Gordy Olsen. It was then that I started entertaining the idea of making a three-minute documentary about the place.

Soon, I found myself in the library, reading about the plane crash and its strange circumstances in the July 3, 1985 issue of the Spokane Chronicle. After several more weeks in the library, an afternoon in a graveyard and a vicious, fact-checking argument on another local bar’s Facebook page, I decided that this story could not possibly be satisfied in three minutes. There was much more of a story here — a story about a business that has operated continuously for as long, or perhaps longer, than any other dining establishment in the city.

Freeman’s Park Inn Restaurant, as it was originally known, opened in 1932. In the ’30s, ’40s and ’50s, it sold burgers, fries and milkshakes and had one of the earliest drive-thru windows in the United States. In the mid-fifties, it was known as the Park Inn Café and had an ice cream parlor. It officially became a tavern in 1956, though it had been serving alcohol before then. Over the years, it’s been a popular neighborhood hangout, a refuge for those with loved ones in the nearby hospitals and a spot for off-duty nurses to blow off some steam.

What’s perhaps most impressive, though, is that in its 80-year history, it was always known as the Park Inn, in one form or another, and it’s never closed down — but it came close. According to the current manager of the bar, Ron Wieber, the Park Inn was least successful in the mid to late 1980s and was beginning to lose money. Customers stopped showing up, and the bar was literally falling apart. Then, in 1993, Wieber and four of his golfing buddies pooled their resources and purchased the Park Inn. As Greg Hougham, one of the owners, describes it, “It was just a group of guys who really enjoyed the place, and wanted to keep it going.”

So, the more I learned, the more eager I was to make this film. But the project almost didn’t happen. Wieber, intensely proud of his restaurant, brought up all the times the Inlander had referred to the Park Inn as a “dive bar” in its pages. But soon, with the dust settled and assurance that I had nothing to do with any mention of the Park Inn as dive bar, Ron agreed to let me start filming.

Some days I would spend an hour or two researching at the Northwest Museum of Arts and Culture, then at night I would bring my camera to the Park Inn, have a couple drinks, film things and interview people. On my way home, I would stumble around the parking lot, looking for clues in every boarded up window and door. One night I discovered a secret staircase dating back to the 1940s.

I thought the Park Inn was just a bar with an interesting story or two attached to it, but I found out something different. This is a largely ignored piece of local history. The Park Inn might not only be the oldest restaurant in Spokane, but also the oldest in Eastern Washington. It is to Spokane what Hudson’s Hamburgers is to Coeur d’Alene.

This video is about the mating habits of 1950s era nurses, a pizza chef that survived the Battle of the Bulge and a kind-hearted, occasionally violent owner who died in a strange plane crash. This is the story of a South Hill institution that survived longer than anyone expected, told through interviews with bartenders and customers and featuring never-before-seen photographs. Enjoy.

Park Inn: The Untold Story from Nathan Brand on Vimeo.