Easy and cheap ways to get yourself on two wheels 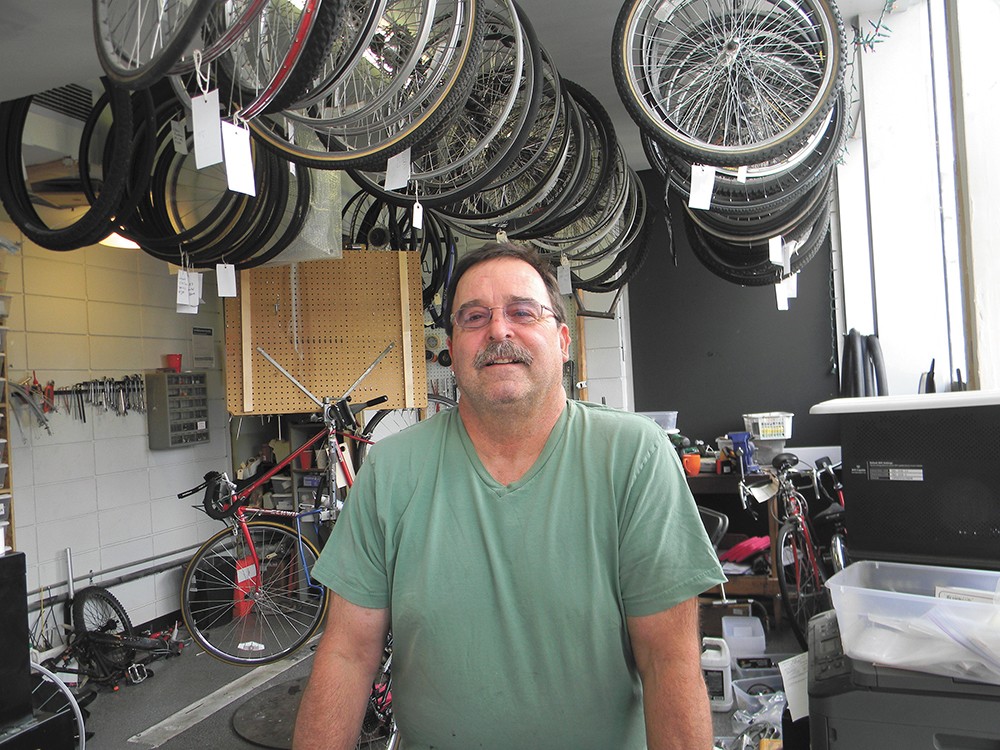 Jake Thomas
Got a problem with your bike? Doug Porter at Mosaic Community Bike shop can fix it.

Maybe you rode bikes as a kid and "grew up" into an adult who sits in traffic.

Maybe you've seen adults who glide through rush-hour traffic on their bikes or hit mountain trails after work with a kid-like enthusiasm. Maybe you've thought about joining their ranks, but are unsure how to do it. With the summer upon us, now is the time. It's not that hard. After all, riding a bike is something you never forget.

Barb Kehr, president of the Spokane Bike Club, says that before you find a bike, you need to know why you want to ride. Do you want to hit trails, cruise around the neighborhood, commute to work, win the Tour de France?

"People enjoyed biking when they were young, and they know they like to ride," says Kehr. But if you're not sure you like to ride, she suggests renting a bike.

If you do decide you like it, she recommends going to a bike shop and getting measured, so you know what bikes will fit you. While there are good deals at area bike stores, she suggests checking out Mosaic Community Bike Shop (611 W. Second; mosaicspokane.com), which sells many refurbished bikes for as little as $30.

Doug Porter, a trained bike mechanic and manager at Mosaic, adds that Cool Water Bikes (224 S. Howard; coolwaterbikes.wordpress.com) is another affordable bike nonprofit. He says that comfort is key to selecting a bike, and that generally you should be able to straddle the bike's frame and have an inch of space between its top tube and your crotch. But if a larger or smaller bike is more comfortable, he says to go for it.

Yard sales and Craigslist can be good places to find a starter bike. Porter says the most important thing to look at is the bike's frame. If it's bent, dented or has rust covering its joints, Porter says to avoid it. See if the wheels are straight, the tires hold air and the brakes and shifters work. Even if they don't, the bike likely can be fixed up.

If you want to make the repairs yourself, Mosaic will rent out stands for $10 an hour and even help you out. Porter says there are also YouTube videos showing how to fix a flat, adjust brakes and other basic repairs.

Unless you're mechanically inclined by nature, learning how to repair bikes takes patience and a willingness to get your hands covered in grease. But knowing that your bike works because of your own efforts is priceless.

Before you get pedaling

Get a helmet (you're required to wear one in the city of Spokane) and a set of front and back lights. Get a good U-lock. It's a metal lock shaped like a "U" and is vastly more reliable than a cheaper wire lock. U-locks may be a bit heavier, but many come with kits to mount them on your bike. Porter says there are some metal chains that also work well. Getting a patch kit to fix flats is a good idea. Also, register your bike with the city (SpokaneBikeID.org) so you can be reunited if it gets stolen.

Barb Kehr says that the Centennial Trail and Fish Lake Trail are great places to get acclimated to biking. She says that riding with a group might be helpful for some beginner riders, and recommends calling around bike shops to find what's offered.

When you're ready to try some city riding, she suggests taking a class offered by the Spokane Regional Health District on the ins and outs of riding in urban environments. More information can be found at walkbikebus.org.

Mariah McKay, a public health educator with the district (and Inlander columnist), says the class prepares new riders for riding in traffic and points out what streets are best for bikes.

Kehr also says that a map of good bike routes from the Spokane Regional Transit Council can be found at srtc.org/maps.html. ♦

You Can Do This

Start With a Tent...